All the talk of pandemics that can only be solved by government intervention has me in a rage. I am literally sick of the fear-mongering rhetoric spewed by everyone from government officials to the mainstream media, advocacy groups, pharmaceutical companies, and the World Health Organization about false threats. The real threat to us all lies in our acceptance of fear, and in our acceptance of a false prophet as savior. What is at stake here is not a threat from disease or other disasters, but a threat to what's left of our precious liberty due to the government's fear-mongering about false "pandemics."

Imagine an entire nation cringing in fear of the H1N1 virus; a virus that will most likely be less troublesome than the every year common flu. In the midst of an economic collapse, a total destruction of our money, unending aggressive and murderous wars, an ever-growing police state, the elimination of common and inherent rights, government takeover of private companies; this only a sampling of what is currently going on, why in the world has fear over the flu taken the place of sanity?

This article is not meant to describe or analyze the very real and adverse health consequences or the scientific nature of the flu vaccines. Those like Bill Sardi and Donald W. Miller and others at LewRockwell.com are much more knowledgeable than I am about this subject, and have done wonderful work in exposing the dangers and health risks of vaccinations. My intent here is to expose the purposeful fear tactics practiced by our own government; tactics that allow for more destruction of our liberty. The latest just happens to be fear-mongering about the swine flu.

What are we currently to be afraid of according to government and other self-interested parties? Obviously, as I mentioned above, the H1N1 flu virus is supposedly "so dangerous" and "so deadly" that many in this country may be forced by the state to take the vaccine. For the "good of society" and due to the hype, many will do so voluntarily, but many others may not have a choice. Already, some states are making swine flu vaccinations mandatory for many. Even full quarantine for non-compliance has been threatened. This is a multi-billion dollar business, and much scrutiny should be practiced when the same people advocating massive vaccinations stand to profit greatly from them; either by gaining more control of the populace, as is the case for government, or by reaping massive monetary rewards, as is the case for pharmaceutical companies. Actually, drug companies donate a lot of money to politicians, and they expect and do gain favors for that support. This corruption always ends with the same results; more adverse health consequences and less savings in our pockets.

We are also told to be very afraid of Iran because of the possibility that they may be attempting to produce a nuclear weapon. This, of course, was the same lie told about Iraq. Even U.S. intelligence services have said that Iran is not producing nuclear weapons so why, given that the U.S. has more nukes than all others combined, is this so important? Iran has not attacked any country in hundreds of years, but those threatening Iran, mainly the U.S. and Israel, have continually and aggressively attacked other countries. The U.S., with its two separate occupations of Afghanistan and Iraq, has Iran virtually surrounded. Should the U.S. be fearful of Iran or should it be the other way around? I think the latter is more plausible.

We are told to be very afraid of terrorism. Why? Why would terrorists want to harm Americans? Is it because they hate our freedom, as Bush claimed, or is it because of constant and long-standing (since at least 1953) U.S. interference in the Middle East; interference that has left hundreds of thousands (or more) of innocents dead, millions displaced, and entire infrastructures destroyed? Is it due to decades of U.S. government support of brutal dictators in that region? Is it because the U.S. military has bases all over that region and much of the rest of the world, and is still expanding its empire? Is it because of brutal sanctions, sanctions that are literally acts of war against those affected? If the U.S. government brought all troops home, lifted all sanctions, closed all overseas bases, and stopped interfering in other countries business, would terrorism even be a threat? I don't think so; at least not in the long term. 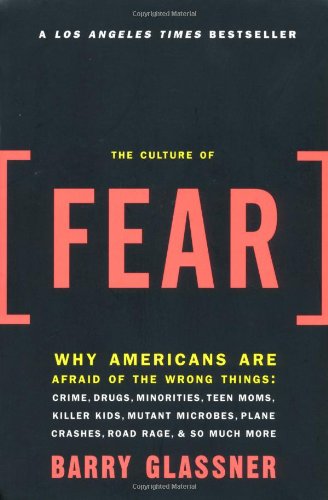 We are told to be afraid of failing and bankrupt companies, and that if they are allowed to fail, we all will suffer. Then the government bails them out at our expense.

We are told to be afraid of immigrants willing to work, and those wanting to hire them.

We are told to be afraid of China and all the low-priced products it produces.

I could go on but I think you get the picture. Should we really be afraid of any of these things? Probably not, but we should be very afraid of the perpetrator of this fear-mongering campaign; our own government.

Fear-mongering by government has but one objective: That is to expand the power of the state over the individual. Over time, mainly due to the government indoctrination centers, (the public school system) this country has become a place that lives and breathes in the collective. It is all about the public good or the good of society. This thinking in effect has destroyed the sanctity of the individual. This is the major problem facing us, for as long as the "good of society" trumps the rights of the individual, we are doomed to a socialistic existence, which simply means freedom be damned! This entire fear-mongering campaign by government is intentional, is propaganda driven, and depends fully on the cooperation of the masses. This is why real dissent and individualism is forcibly squelched by the state at every opportunity, and why examples are made of those who buck the system.

While I have become more hopeful these past few weeks, still the majority in this country are simply a collective herd of sheep. They are for the most part fully dependent on the government apparatus for their very existence. Most consider themselves only a cog in the wheel of society, and stand in perpetual fear of non-existent monsters. They have given up their individual freedom for protection and support by the state. Only a return to individualism and self-reliance can allow us to escape this serf-like malaise. Without this change in thinking, the fear-mongering state will get what it desires, while the people will get what they deserve.

When Money Dies The Wrong Stuff Did NASA Moon the Public?