Why is an anti-political guy writing a political blog? Find out here.

Magnets Cling to Where People Are Vaccinated

Kevin McCarthy Says Nobody Questions ‘Legitimacy Of The Presidential Election’, Says He’ll Be House Speaker In 2023

Eric Clapton After Covid Shot: ‘I should never have gone near the needle’

Guitarist/singer/songwriter Eric Clapton took both AstraZeneca shots and his hands and feet became numb, frozen or burning and he was afraid he would never play guitar again. He said he got the jabs because “the propaganda said it was safe for everyone.” He’s now allied with America’s Frontline Doctors, who were successfully treating patients with HCQ but found themselves censored online and smeared and even some like Dr. Simone Gold losing their jobs.

“I’ve been a rebel all my life, against tyranny and arrogant authority, which is what we have now,” says Clapton, :but I also crave fellowship, compassion and love, and that I find here.”

Former Pfizer VP: Why are we being lied to about Covid? There’s no good reason

If they were doing this in Syria they’d get medals.

Demarcus Adams, 21, Jarius Brunson, 22, and Brandon Miller, 22, all enlisted members of the U.S. Army and stationed at the Fort Campbell, were arrested Tuesday morning for their alleged involvement.

The investigation into the soldiers began after one person was shot and killed and seven others were wounded at a South Side birthday party on March 26. Police said five of the firearms were purchased from Federal Firearms Licensed dealers in the Clarksville, Tennessee area.

Further investigation identified Adams, Brunson and Miller as the alleged majority purchasers of the firearms.

Authorities believe the trio purchases 91 firearms from multiple FFLs in Clarksville and in Kentucky.

Once the firearms were purchased, which happened during the last five months, Miller then would allegedly provide them to people he knew in Chicago, according to the criminal complaint.

On April 28, a federal search warrant was executed at the home of Miller and Adams in Clarksville, where 49 empty firearms cases were recovered. Many of these empty cases were matched to firearms recovered by the Chicago Police Department at the scene of recent shootings and homicides.

They have been charged with transferring a firearm to an out-of-state resident; making false statements during the purchase of a firearm; engaging in the business without a firearms license; wire fraud; money laundering; and conspiracy to commit Title 18 offenses.

If convicted, the defendants face up to 20 years in prison.

Why are magnets sticking to people who have been jabbed?

UK: Vaccine Passport for International Travel Will Soon Be on NHS App

Oops: MIT researchers infiltrate ‘anti-maskers,’ but find they ‘practice a form of data literacy in spades’

The Most Lethal Act That Kills Governments

One World. Thanks, John Frahm.

Regardless of where you stand on vaccines it is my hope that you’ll stand for individual autonomy and the natural right to reject any medical procedure, including forced shots.

The Alabama Senate version of SB267 does the following:

Prohibits the issuance of vaccine passports by state and local government entities.

Prohibits businesses from denying goods or services based on an individual’s vaccine status.

The House Health Committee substituted version does the following:

Allows institutions of higher education to require vaccinations but must accept medical and religious exemptions for employees and students.

Allows medical care providers and facilities to DENY care to individuals who do not vaccinate according to the doctor’s/institution’s policies. Want to refuse the flu shot that your doctor recommends? They can refuse to provide any further care to you unless you comply with their policy.

Below is a post card so that we can see SB267 on the House Special Order Calender for the LAST day of session on May 17th. Please forward to your contacts that agree that healthcare is an individual, personal choice. 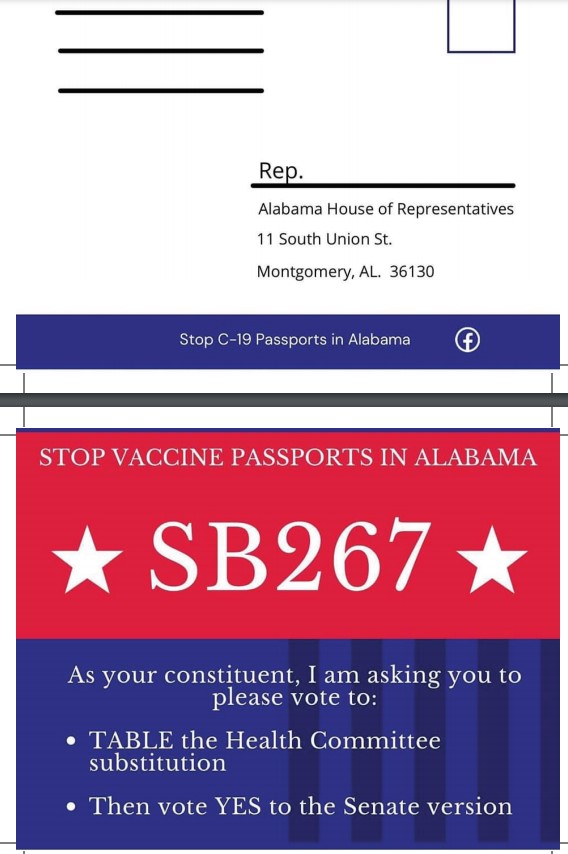