Has Comrade Warren Wilhelm, Jr. Destroyed New York City Once and For All?

I speak of course of the man who in 2001 changed his name to “Bill De Blasio” and who is now mayor of New York City.  A modern-day red-diaper baby whose parents were both communists (like him); who left college to help the Nicaraguan communists in the ’80s (proving that he must have been influenced at some point by the Jesuits); who joined the “Nicaraguan Solidarity Movement” that sought to destroy capitalism and replace it with socialism; who honeymooned in Cuba (Bernie Sanders already had done the Russia honeymoon thing); and worked for both Clintons.

The people who elected this numbskull communist as their mayor are now packing up moving vans by the thousands and moving to YOUR city and YOUR state.  Good luck with that. 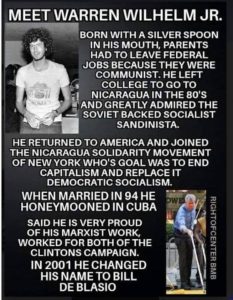