Inside the US Mental Ward

An unexpected emergency forced me into air travel recently and the experience has been extraordinarily jarring. I expected the masses to be slinking along with their faces covered, but what I saw was far worse. The spirit has been sucked out of people. Everyone with head down. There is no joy. No laughter. No hugs goodbye. No children squealing at the arrival of family and friends.

Just a feeling that some kind of sedative had been sprayed through the air ventilation system. This is not the California I was born and raised in. There is no California spirit, optimism left.

On an Uber ride upon arrival a few days ago the driver, very cautiously at first, explained to me the podcasts he listens to. Podcasts questioning the “great reset” and questioning the authenticity of the “Covid era.” Reassured he had a sympathetic ear, he then released his true feelings in a flood. I expected more anger but it was something else. This is all a farce. It’s all about control. It is designed to make people insane. But instead of anger there was sadness and resignation. He had resigned himself, he explained, to use the power of self-suggestion to maintain a feeling somewhere in his psyche that he was free. To put on a cocoon against the onslaught and hunker his spirit down.

I wondered how many were like him. Who were not enthusiastic participants in this massive psychological experiment on the population, but rather fearful skeptics.

The loudspeakers remind us every half minute that we must wear masks and social distance and wash our hands for 20 seconds. 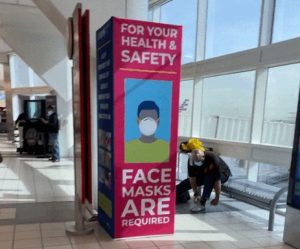 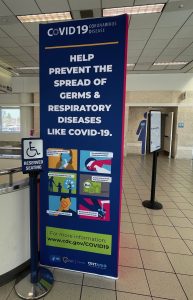 I do wonder how many of the compliant are true believers and how many are like my Uber driver. The parallels are probably too often drawn, including by me, but one is distinctly reminded of the early Soviet era where signs proclaiming this or that new regulation, demand, threat, were plastered everywhere. By late communism the yellowed signs often remained but the spirit that animated them had long been extinguished. No one believed that crap any longer, save for a few who were viewed as unstable specimens.

Seventy years is a long time, however, and we are just getting started.

Here at the airport on what is normally the busiest travel day of the year, I am in an entire empty section of the terminal. It is a ghost town, with, to add an additional layer of cruelty, piped in Christmas (or “holiday”) music. A reminder of normal and a reminder of what has been destroyed.

Instead of a laptop in front of her, however, she has various disinfectant products and hand sanitizers. She is wearing not one, but two face masks. On top of those two face masks she is wearing a plastic shield. She takes out a ziplock bag with more disinfectant-soaked cotton wipes. She is alternating between sanitizing her hands – over and over – and sanitizing everything around her. Her eyes burn with fear.

Once upon a time, not long ago, society would pity such a young woman. So much promise ahead of her. So sad to see that she has gone insane.

But not now. Now the whole world has gone insane. God help us.