The Nihilism of Destruction

Four centuries and more of modern thought have been, from one point of view, an experiment in the possibilities of knowledge open to man, assuming that there is no Revealed Truth.

Nihilism: The Root of the Revolution of the Modern Age, by Eugene (Fr. Seraphim) Rose

We are living in the conclusion of this experiment.  As Fr. Rose puts it, “if there is no Revealed Truth, there is no truth at all….”  It can’t be, you say.  Well, when a man can choose to be a woman, and vice versa, when a flu can cause the world to panic, when box cutters can lead to the greatest (at least until then) power grab in human history, when the right to choose overcomes the right to life…. there is no truth.

But there are those who continue to seek truth from the bottom, unaccepting of revealed truth.  This is the path of modern philosophy.  “Common sense” and the current opinions of the “in crowd” – whether that in crowd is made up of fellow academicians or cocktail party companions.

In fact, no one lives but by the light of some revelation, be it a true or a false one, whether it serve to enlighten or obscure. 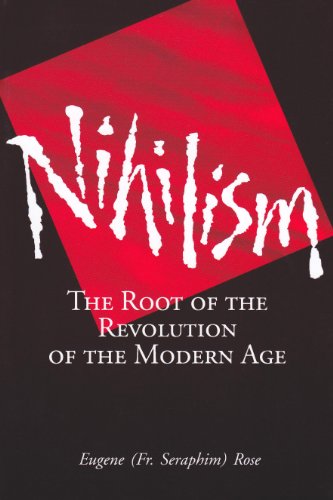 And false revelations lead to the abyss.  It is not logic that stands as an obstacle to this Revealed Truth – logic tells us that men are men, and women are women, after all.  It is, instead, an opposed faith – call it an alternative narrative.  Man lives in a story.

As one who embraces the non-aggression principle, I once believed that factual and logical arguments would win the day for this proper, Christian, method by which to determine when violence is justified.  Yet, if all it takes are facts and logic, libertarian political theory would win in a landslide.  But this is insufficient – we live in a story.

We see this even in the Christian Church, divided on the social justice warrior and critical theory lines of today.  Facts and logical arguments make clear the situation, but these don’t win the day.  Instead, there are distortions of truth offered in the various causes promoted by those claiming to seek racial reconciliation, affirmation of alternative choices, etc.  But there is not complete Truth.

Fr. Rose continues with an examination of the stages of the nihilist dialectic.  He offers the French Revolution, Communism, and National Socialism as episodes that exemplified the successes of nihilism, but these examples have not dissuaded men from continuing on the path.  But, how did we get here?  For this, he considers four steps.

Fr. Rose sees the first step in Liberalism.  This will be tough sledding, but it is ground previously covered at this blog – ground that suggests that libertarianism (or liberalism) without a proper cultural grounding in Christian ethics and Natural Law leads us away from, not toward, liberty.

The Liberalism we shall describe in the following pages is not – let us state at the outset – an overt Nihilism; it is rather a passive Nihilism, or, better yet, the neutral breeding-ground of the more advanced stages of Nihilism.

I offer the following, from Murray Rothbard:

What I have been trying to say is that Mises’s utilitarian, relativist approach to ethics is not nearly enough to establish a full case for liberty. It must be supplemented by an absolutist ethic – an ethic of liberty, as well as of other values needed for the health and development of the individual – grounded on natural law, i.e., discovery of the laws of man’s nature.

Yet we see many defenders of this Liberal order – free markets and trade, travel, free speech, property rights – fighting to hold on to these values while ignoring the foundation on which these were built.  Returning to Fr. Rose:

The incompetent defense by Liberalism of a heritage in which it has never fully believed, has been one of the most potent causes of overt Nihilism.

We have seen the results of this in the liberal Bret Weinstein and Evergreen State College, or the liberal Jordan Peterson at the University of Toronto, attempting to defend the liberal order they rightly cherish without leaning on the foundations upon which it was built.

Defenders such as these have a genuine regard for truth.  However, they remain stuck in a framework that can only accept truth built from the bottom up – they are precluded, by their training and social circles – from claiming a reliance on absolute, revealed truth.  Unfortunately, it is on this same bottom-up foundation that the enemies of truth also build their structures.  And the enemies of truth don’t play by the liberal’s ground rules.

The blindness of the Liberal is the direct antecedent of Nihilist, and more specifically, of Bolshevist, morality; for the latter is only a consistent and systematic application of Liberal unbelief.

I return, as always, to Antonio Gramsci.  While the liberals, at most, ignore Christian truth in order to achieve their desired form of liberty, Gramsci knew that it was Christian truth that must be destroyed to achieve his desired communism.  Once Christianity is removed, they both can’t be right – and we see which one is right, as it certainly isn’t our liberty that is blossoming.

The radical attacks the Liberal doctrine at every point, and the veil of rhetoric is no protection against the strong thrust of his sharp blade.

Fr. Rose then moves through three more stages – Realism, Vitalism, and the Nihilism of Destruction.  I will only briefly touch on these.  It should be noted: while it is clear that there is little left of the best of the Liberal order, these remaining three phases overlap, each contributing in various forms to our current calamities.

As opposed to Liberal vagueness, the Realist world-view seems perfectly clear and straightforward.

Agnosticism is replaced by atheism; instead of “higher values,” materialism and self-interest.  Where the Liberal is vague about ultimate things, the Realist does not even consider such things.  Realism gives birth to scientism – attempts to take science beyond its proper bounds.  The Liberal is indifferent to absolute truth; the realist is hostile to it.  For the Liberal, everything is gray; for the Realist, only black and white.

Well-meaning realists hope to forestall the next Hitler by appeals to reason and science, but they merely open the door to the next “terrible simplifier” (for example, all white people are racist).

Next, Vitalism was an attempt to derail the Realist train – a reaction against the eclipse of higher realities in the Realist’s simplification of the world.  It was an attempt to stop the momentum toward “an inhuman technological system wherein all worldly problems would be solved at the cost of the enslavement of men’s souls.”

Obviously, Vitalism has failed at this task.  Accepting the idea that there is no absolute truth (in fact, not considering truth at all), on what basis could Vitalism succeed?

There is no form of Vitalism that is not naturalistic, none whose entire program does not begin and end in this world….

As if to prove that any attempt to regain Liberal ends without the foundation of the means necessary to gain these is futile, consider the most successful liberal countries on earth – the descendants of the British Empire.  The United Kingdom, Canada, Australia, New Zealand, and, most certainly, the United States, have grown into the most destructive police states – they have become that which they claimed to have defeated in the wars of the twentieth century.

Finally, Fr. Rose comes to the Nihilism of Destruction:

Here at last we find an almost “pure” Nihilism, a rage against creation and against civilization that will not be appeased until it has reduced them to absolute nothingness.

Keeping in mind that Fr. Rose wrote this work in the early 1960s, his foresight and perceptiveness regarding our day is remarkable:

…but never until our own time have there been a doctrine and a plan of destruction, never before has the mind of man so contorted itself to find an apology for this most obvious work of Satan, and to set up a program for its accomplishment.

As I have previously written, regarding events of the last two years:

…never before in the recorded history of humanity has the entire population of the world been under siege simultaneously and placed in a medical experiment, forced to face the risk of early death regardless of the path chosen.  All of humanity; one-hundred percent.  More than seven billion people.

Every institution destroyed, every “science” manipulated, every authority – political or religious – compromised.  Fr. Rose writes of many examples in the former Soviet Union and Nazi Germany.  I read these and consider that these examples are more applicable, yet more subtly applied, today.

Not to give Fr. Rose too much credit for his foresight:

Such phenomena, of course, are extreme, and they must be viewed in proper perspective.  Only a few have been capable of such pure Nihilism….

Well, perhaps it is time for an updated edition to this book….

The French: Citizens or Mere Voters? Should the Government Keep People from Harming Themselves?