Is plunging Russia into darkness really a good idea?

Occasionally, a revelatory, and profoundly alarming, article passes almost unnoticed, even when published on the front page of The New York Times. Such was the case with reporting by David E. Sanger and Nicole Perlroth, bearing the Strangelovian title “U.S. Buries Digital Land Mines to Menace Russia’s Power Grid,” which appeared in the print edition on June 16. The article contained two revelations.

First, according to Sanger and Perlroth, with my ellipses duly noted, “The United States is stepping up digital incursions into Russia’s electric power grid.… Advocates of the more aggressive strategy said it was long overdue…” The operation “carries significant risk of escalating the daily digital Cold War between Washington and Moscow.” Though under way at least since 2012, “now the American strategy has shifted more toward offense…with the placement of potentially crippling malware inside the Russian system at a depth and with an aggressiveness that had never been tried before.” At this point, the Times reporters add an Orwellian touch. The head of the U.S. Cyber Command characterizes the assault on Russia’s grid, which affects everything from the country’s water supply, medical services, and transportation to control over its nuclear weapons, as “the need to ‘defend forward,’” because “they don’t fear us.” 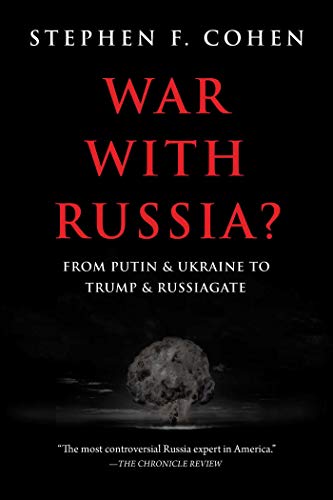 Nowhere do Sanger and Perlroth seem alarmed by the implicit risks of this “defend forward” attack on the infrastructure of the other nuclear superpower. Indeed, they wonder “whether it would be possible to plunge Russia into darkness.” And toward the end, they quote an American lawyer and former Obama official, whose expertise on the matter is unclear, to assure readers sanguinely, “We might have to risk taking some broken bones of our own from a counter response.… Sometimes you have to take a bloody nose to not take a bullet in the head down the road.” The “broken bones,” “bloody nose,” and “bullet” are, of course, metaphorical references to the potential consequences of nuclear war.

The second revelation comes midway in the Times story: “[President] Trump had not been briefed in any detail about the steps to place ‘implants’…inside the Russian grid” because “he might countermand it or discuss it with foreign officials.” (Indeed, Trump issued an angry tweet when he saw the Times report, though leaving unclear which part of it most aroused his anger.)

What is the significance of this story, apart from what it tells us about the graver dangers of the new US-Russian Cold War, which now includes, we are informed, a uniquely fraught “digital Cold War”? Not so long ago, mainstream liberal Democrats, and the Times itself, would have been outraged by revelations that defense and intelligence officials were making such existential policy behind the back of a president. No longer, it seems. There have been no liberal, Democratic, or for the most part any other, mainstream protests, but instead a lawyerly apologia justifying the intelligence-defense operation without the president’s knowledge.

The political significance, however, seems clear enough. The leak to the Times and the paper’s publication of the article come in the run-up to a scheduled meeting between President Trump and Russian President Vladimir Putin at the G-20 meeting in Japan on June 28–29. Both leaders had recently expressed hope for improved US-Russian relations. On May 4, Trump again tweeted his longstanding aspiration for a “good/great relationship with Russia”; and this month Putin lamented that relations “are getting worse and worse” but hoped that he and Trump could move their countries beyond “the games played by intelligence services.”

As I have often emphasized, the long historical struggle for American-Russian (Soviet and post-Soviet) détente, or broad cooperation, has featured many acts of attempted sabotage on both sides, though most often by US intelligence and defense agencies. Readers may recall the Eisenhower-Khrushchev summit meeting that was to take place in Paris in 1960, but which was aborted by the Soviet shoot-down of a US spy plane over the Soviet Union, an intrusive flight apparently not authorized by President Eisenhower. And more recently, the 2016 plan by then-President Obama and Putin for US-Russian cooperation in Syria, which was aborted by a Department of Defense attack on Russian-backed Syrian troops.

Now the sabotaging of détente appears be happening again. As the Times article makes clear, Washington’s war party, or perhaps zealous Cold War party, referred to euphemistically by Sanger and Perlroth as “advocates of the more aggressive strategy,” is on the move. Certainly, Trump has been repeatedly thwarted in his previous détente attempts, primarily by discredited Russiagate allegations that continue to be promoted by the war party even though they still lack any evidential basis. (It may also be recalled that his previous summit meeting with Putin was widely and shamefully assailed as “treason” by influential segments of the US political-media establishment.)

Détente with Russia has always been a fiercely opposed, crisis-ridden policy pursuit, but one manifestly in the interests of the United States and the world. No American president can achieve it without substantial bipartisan support at home, which Trump manifestly lacks. What kind of catastrophe will it take—in Ukraine, the Baltic region, Syria, or somewhere on Russia’s electric grid—to shock US Democrats and others out of what has been called, not unreasonably, their Trump Derangement Syndrome, particularly in the realm of American national security? Meanwhile, the Bulletin of Atomic Scientists has recently reset its Doomsday Clock to two minutes before midnight.

This commentary is based on Stephen F. Cohen’s most recent weekly discussion with the host of The John Batchelor Show. Now in their sixth year, previous installments are at TheNation.com.

Previous article by Stephen F. Cohen: How Did Russiagate Begin?