Walter Block, Ralph Raico, and I have founded a group called “Libertarians for Trump.” Its website, libertariansfortrump.org, designed and managed by Martin Moulton, seeks to advance Libertarian values and discussion in the 2016 Election and invites people to join the #LFT Movement.

I recount the beacons on the path I took to becoming a libertarian in “What Kerouac, Kennedy, Lincoln, and Practicing Medicine Have Taught Me About Liberty” for Why Liberty: Personal Journeys Towards Peace & Freedom, edited by Marc Guttman. [1] In Why Liberty, 54 people from all walks of life tell how they became libertarians. (Two particularly interesting ones are “The Significance of the Berlin Wall—an African Perspective” by Temba Nolutshungu and “From Political Apathy to Evangelist for Small Government” by Carla Howell.) 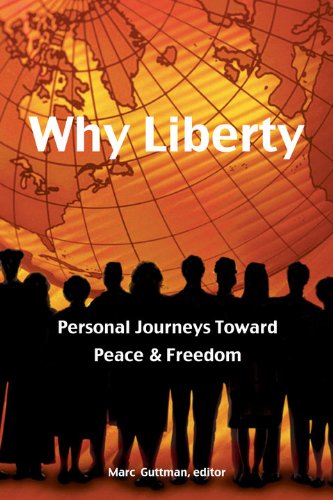 The Beat Generation was the first generation in American history to be subjected to peacetime military conscription. After World War II, seeing the ovens of Auschwitz and what atomic bombs can do, this generation of young Americans started a movement that rejected post-war statism. Led by Jack Kerouac, this movement championed freedom and individuality and shunned conformity to the established order. Libertarians at heart, the Beats, as Kerouac writes in his novel On the Road, sought escape and enlightenment through sex, drugs, bebop/hard bop jazz, and Eastern mysticism.

Young Americans today, the Millennial Generation (born 1982-2004), are different.  They are the products of a regimented, government-controlled school system. James Ostrowski, author of Progressivism: A Primer on the Idea Destroying America, observed a Donald Trump rally in Buffalo NY recently. He writes:

“Sanders attracts people who recently emerged from thirteen to seventeen years of progressive brainwashing in K-12 government schools or colleges.  They still believe that government will solve all human problems—that is all they ever heard.  They know little if any economics. Trump’s people are different, averaging maybe 45-50.  They have been out of school long enough to realize that most of the stuff they learned in school about government is bull.  They have worked hard for decades and have little to show for it but stress and debt.  They know in their bones that the system is rigged and they cheer wildly when their hero pronounces this obvious truth.”  [2]

Today, approximately 1 in 4 Americans could be characterized as holding libertarian views. Jeff Deist, president of the Mises Institute, estimates that perhaps 5 to 10 percent of the population, 10 to 30 million people, are true libertarians. These are, as he puts it, “people who agree to a large extent with the idea of serious reductions in the size and scope of government.” [3]

(A libertarian might be better called a “classical liberal.” In the past, a liberal was a person who believed in the system of liberty and minimal

government. A liberal now, however, is a person who believes in big government, one big enough to make just about every area of human activity its business. Libertarians are liberals in its classic sense.)

Libertarians advocate four things: individual liberty, private property, free markets (operated with sound money), and peace (following the non-intervention/non-aggression principle). They adhere to the two natural laws that make human civilization possible: Do All You Have Agreed to Do and Do Not Encroach on Other Persons or Their Property. Individual liberty and free markets cannot exist without these two laws. They safeguard contracts and property rights respectively. Political systems that reject them always eventually succumb to tyranny or chaos, one or the other. [4]

The path that the U.S. government has been following over the last 100 years began with the newly adopted Federal Reserve System (the country’s third central bank) and a personal income tax (that, among other things, helps fund its wars). Armed with these two money-printing and money-collecting acts, the country’s leaders continue on a redistributionist, “progressive” ideological path. Instead doing all they have agreed to do and not encroach on other persons or their property, progressives follow a different code, one in which “the end justifies the means” (i.e., a perceived good outcome excuses any wrongs committed to attain it.) Now, 103 years after the Fed was formed and an income tax enacted (in 1913) the American political system is becoming increasingly tyrannical.

Like how the Beat Generation saw it after World War II, it is becoming increasingly clear that government has made a mess of things. An increasing number of freedom-loving Americans are realizing that there must be serious reductions in the size and scope of government and are becoming libertarians.

The U.S. economy is falling apart. The middle class is shrinking, consumer sentiment is plummeting, consumer spending is slowing, and (inflation-adjusted) wages are dropping. In one out of five American families, no one in the family has a job. Debt is escalating—consumer, corporate, and especially government debt. More than half of American workers now make less than $30,000 a year; and nearly twice as many Americans work for the government, 22 million than are employed in the manufacturing sector of the economy, which is down to 12.3 million. [5]

Such is the case also with education and healthcare. With K-12 schools implementing Common Core and colleges providing “safe spaces” for students to shield them from unwelcome thoughts, American education is intellectually bankrupt. Its government-controlled schools teach unquestioning devotion to statism. And with the passage of the Affordable Care Act in 2010 government-controlled healthcare has become increasingly regimented and unaffordable. [6]

“Americans are very outraged at the total corruption of all forms so obvious at the top of our nation, especially in D.C. and on Wall Street. They are no longer submissive Party members scraping and bowing to the Super Robber Barons… Tens of millions of Americans are searching for ways out of the awful crises the government is forcing on them. They are agitated, moving, changing very rapidly. They are looking for new leaders who will put an end to the hated System.” [7]

Only 1/3rd of Americans supported the first American Revolution (according to John Adams), and a like percentage of freedom-loving Americans could effect a second, more peaceful one.

When a nation’s economy starts collapsing its rulers will turn to war, which provides a handy excuse and explanation for the economic illness ravaging their country. The U.S. is close to engaging in a war against Russia, and possibly China. Alone among the remaining Republican and Democratic candidates running for president in the 2016 election, the only one who can keep the U.S. out of what could turn out to be a nuclear World War III is Donald Trump. I address this concern in “Trump: Our Only Hope for Escaping World War III” [9], which spurred Walter Block, Ralph Raico, Martin Moulton, me and my wife, Linda, to form and manage #LFT.

1 – Miller DW.  “What Kerouac, Kennedy, Lincoln, and Practicing Medicine Have Taught Me About Liberty.” Available at: https://archive.lewrockwell.com/miller/miller34.1.html

5 – Zerohedge.com. “A Bird’s-Eye View of How The US Economy Is Falling Apart (In 4 Simple Charts).” Available at: http://www.zerohedge.com/news/2016-04-25/birds-eye-view-how-us-economy-falling-apart-4-simple-charts

6 – Miller DW. “Modern Medicine at the Crossroads,” available at: http://www.jpands.org/vol20no3/miller.pdf

7 –Douglas JD. On the LewRockwell.com Political Theater. Available at: https://www.lewrockwell.com/political-theatre/americans-revolt/

An Establishment Love AffairHealth Cometh Not From Healthcare