Review of David Vine’s Island of Shame: The Secret History of the U.S. Military Base on Diego Garcia (Princeton University Press, 2009)

Why should anyone care about 5,000 part-African, part-southern Indian Chagossians, who once inhabited Diego Garcia, a remote island in the Indian Ocean mid-way between Africa and Indonesia, who were exiled so the U.S. could build yet another military base?

Since the onset of WWII and its aftermath, tens of millions have been massacred by governments and assorted religious and secular fanatics. In that time, too, the U.S., the world’s most powerful military force, has quietly expelled indigenous populations on the too-little contested argument that the world’s "indispensable nation" possessing several thousand nuclear bombs has a moral duty to do as it wishes to defend its national interest, however ambiguously and broadly defined. Undeterred by Milton Eisenhower’s prophetic phrase in 1953 about a rising "military industrial complex" about which his presidential brother tried unsuccessfully to warn us, why, then, should anyone care about Chagossians?

David Vine, an anthropologist at American University hired by attorneys representing the Chagossians to tell their sad story, does care and with a heavy dose of revealing documentation, convincingly argues their case. His Island of Shame is filled with rage at how the British and U.S. governments stole a people’s home, sent them into foreign slums and then forgot about them. The purpose of this forced dislocation was to control the Indian Ocean, Central Asian oil fields, and help carry out American wars in the Middle East and Afghanistan. Today, Chagossian-free, isolated Diego Garcia is "the single most important military facility we’ve got," at least according to the military analyst John Pike. 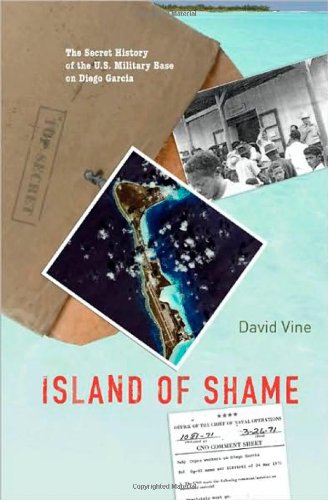 Between 1968 and 1973, in an act hidden from the world, ignored by the press and TV and Congress and Parliament (the British retain nominal control of Diego Garcia, but granted a long-term lease to the U.S.) the two countries threw out the dark-skinned Chagossians to develop a major U.S. air and naval base.

David Vine was never allowed to visit the island — very few are granted this privilege — but he did translate relevant documents and materials from the French, Mauritian Kreol, and Seselwa (Seychelles Kreol). His rage at what he rightly considers an injustice solely to service the American war machine is apparent in every chapter, perhaps best revealed in a striking and squalid but telling incident that occurred just before the final ejection of the remaining Chagossians.

"British agents and U. S. troops on Diego Garcia herded the Chagossians’ pet dogs into sealed sheds and gassed and burned them in front of their traumatized owners awaiting deportation" — yet another example of how imperial invaders exhibit their values.

Off-limits to all but a few very special visitors, Diego Garcia so top secret (more so than Guantanamo and Bagram Air Force Base) Vine suggests that, in addition to serving as a launching pad for bombing raids in Afghanistan and Iraq, it has been used for "rendition" of prisoners, citing, for example, British Foreign Secretary David Miliband’s admission to Parliament in February 2008 that the island has been used as a way station for shipping suspected terrorists to friendly nations (paid handsomely by U.S. and British taxpayers to treat prisoners as they wish) plus a Council of Europe report that the island has been used to lock away suspects. Verifiable details remain highly classified since the Bush administration said nothing and the Obama administration, eager to prove its toughness in national security, has thus far been silent about rendition, secret prisons, and Diego Garcia.

The displacement of local people is hardly new and Vine catalogs many defenseless people such as Greenland’s Inughuit of Greenland, the Bikini Atoll islanders, and 3000 Okinawans dispatched to Bolivia because of continuing American military expansion. Nowadays, U.S. military personnel are stationed in approximately 1,000 military bases outside continental U.S. at a cost estimated at more than $100 billion annually. In Hugh Gusterson’s wonderfully descriptive words, "The U.S. is to military bases as Heinz is to ketchup" (Bulletin of Atomic Scientists, 3/10-09). Said one critic in 2007 — who happens to be the leftist Ecuadorian President Rafael Correa unwilling to renew a U.S. base — when asked if he would renew an American base’s lease in his nation answered, only if "they let us put a base in Miami — an Ecuadorian base."

And finally there is the plaintive voice of the exiled Olivier Bancoult of the Chagos Refugees Group, its survivors still trying to return home: "We are the descendants of slaves. Our skin is black. We don’t have blue eyes…Whether we are black, whether we are white, whether we are yellow, we must all have the same treatment, …Stop all the injustices that have been committed against us."

It won’t happen, of course. The American Empire stands in their way. Vine’s seminal Island of Shame reveals just one of the multitude of injustices and cruelties always committed in the name of war and preparation for more war.

Of Course, Global Warming Is a HoaxThe World's Freest, Richest Country Is Under Attack