Dan Fleshler, an American Jewish "media and public affairs strategist" I’ve never met and a dove on Israel and American foreign policy, believes more and more American Jews have reached the conclusion that the Jewish establishment’s old line organizations, the heart of Israel’s American lobby, do not act or speak on their behalf.

In Transforming America’s Israel Lobby (Potomac Books), Fleshler’s incisive and thoughtful book I read during AIPAC’s recent annual meeting, he asks why American Jews, overwhelmingly liberal to moderate (e.g., 78% voted for Obama and at least 70% support a "two-state solution"), have permitted right-wingers, hawks and neocons to speak in their name on Vietnam, Iraq, Afghanistan and of course, Israel. The hundreds of thousands who protested against an invasion of Iraq in New York City on a frigid day in February 2003 included many Jews yet the pro-Israel establishment ("pro-Israel" is a bogus term so critics can be thought of as anti-Israel) remained and remain mute.

"Precisely where have all the Jewish doves been hiding all these years?" Fleshler asks. "What accounts for their collective tongue-biting"?

This was never more evident than in the nearly universal assault on a book, John Mearsheimer and Stephen Walt’s The Israel Lobby and U.S. Foreign Policy. Given the overwhelmingly negative response it received one would think latter day Cossacks had landed to pillage and rape Israel and its Jewish allies. Yet the authors are scholars associated with the "realist" school of foreign policy, Mearsheimer at the University of Chicago and Walt at Harvard. Their sin was asking if unquestioned support for Israel was always in the American national interest.

Oddly enough, Mearsheimer and Walt would agree with much of Fleshler’s criticisms save his contention that the power of the Israel Lobby is overrated. Though hardly monolithic, it behaves much like every other lobby in fighting for their client’s interests. AIPAC, for example, works the Congress, not that most members require much persuasion. It would be hard to find a national politician who dares tangle with them. At every one of AIPAC’s annual meetings politicians rush to declare their eternal love for Israel. 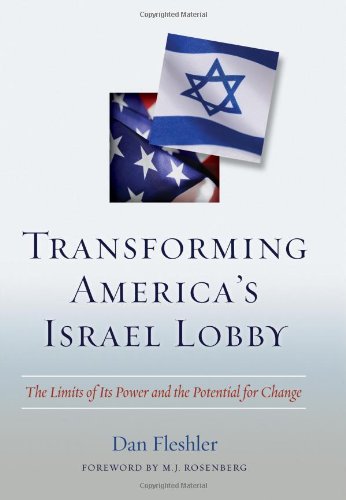 Transforming America’s Israel Lobby contends that things may be changing and points to several possible trends. Still, the election of Benjamin Netanyahu and the naming of Avigdor Lieberman as his Foreign Minister means that two authentic hardliners eager to attack Iran will never allow "two states for two peoples" if that means a truly independent Palestine, as U.S. policy allegedly favors. I wonder if the U.S. will be able to resist Netanyahu’s call to arms when the latter visits Washington this week. With the coming of Obama it’s possible we may see a reduction of the lobby’s influence and power but there is certainly no reason to be overconfident.

Fleshler, though, thinks the lobby appears more powerful than it really is, and cites an occasional denial of Israel’s requests, most recently Bush 2’s refusal to allow Israeli bombers the right to fly over Iraq to attack Iran. There are a few —very few — similar refusals, such as Bush 1’s insistence that either Israel cease building additional settlements in the occupied West Bank or else forego American money. Infuriated, more than one thousand lobbyists arrived in Washington and then-Israeli Prime Minister Yitzhak Shamir was "reassured by AIPAC and Likud operatives in Washington that Israel could win a fight in Congress." Bush 1 tried to fight back, but was overwhelmed, famously complaining in one his memorable press conferences, "We’re got one little guy [himself] over here. I think the American people will support me." But following strong protests he did back down.

There are, however, less publicized instances where efforts have been made to silence critics. NYU historian Tony Judt’s scheduled lecture (he’s Jewish and a critic of the lobby) at a Polish institute in Manhattan was abruptly cancelled when local lobbyists protested. Bishop Tutu’s talk at a Catholic college in Minnesota was called off and only restored after outraged faculty and students vigorously dissented. Fleshler mentions that Mearsheimer and Walt’s scheduled talk at a Chicago meeting was cancelled. No surprise there. But Jimmy Carter, who did more for Israel than any other President, was condemned as anti-Israel because he dared use the forbidden word "Apartheid" in the title of one of his books about Israel. When Carter’s speech and Q&A at Brandeis University ended, C-Span’s coverage showed the former President receiving a huge ovation from his Jewish audience, lending some credence to Fleshler’s belief that things are changing.

Still, there’s the more recent example of the lobby’s strength: The nomination of Charles Freeman, a thirty-year veteran of the diplomatic corps and the Pentagon to the National Intelligence Council which manages the National Intelligence Estimates (it infuriated Israel and its friends in November 2007 when it claimed Iran was not in the nuclear weapon business) was promptly shot down by the lobby and its allies and Freeman’s name was withdrawn by the new (and intimidated?) Obama administration.

The late Reform Rabbi and WWII veteran Alexander Schindler (he was awarded the Purple Heart and Bronze Star), one of the last fearless and liberal national Jewish leaders, once portrayed his generation’s loyalty as grounded on a "kidney machine," which he defined as the Holocaust and Israel. Newer generations are now more acculturated, more assimilated, and public anti-Semitism is at its lowest ebb in U.S. history. "Why should we care about all those old institutions? We need our own institutions" an anonymous (why anonymous?) young activist told Fleshler. And Tom Dine, an early leader of AIPAC who now rejects its approach and consults for the Israel Policy Forum, told Fleshler he rejects the leadership of the traditional organizations, "These people have to go. These people have stayed too long."

Where their predecessors Beira, New Jewish Agenda, and the Jewish Peace Lobby were excoriated as anti-Israel and driven to cover, the new groups are able to raise money (though not nearly as much as the older ones), lobby Congress, become involved in political races (as J Street does) and use the Internet to spread their messages. Their members tend to be younger, better educated and more secure than their parents and grandparents. They are the people who can build a different American Jewish community which can help shape a more realistic policy in the Middle East, oppose settlements, work for a sovereign Palestine alongside Israel, and avoid a war with Iran with its unpredictable consequences.

The last word is by M.J. Rosenberg in his Foreword. Rosenberg is an acute onetime congressional aide, a former editor of AIPAC’s "Near East Report" and is now working for the nonconformist Israel Policy Forum. Given the will and determination, he argues, "any president can pursue Middle East peace without fear of the lobby, because the overwhelming majority of American Jews are not hardliners, advocates of the lobby’s line, or single issue voters. American Jews are Americans and treating us as if our only concern were sustaining the status quo in Israel is both insulting and wrong. Few of us take our cue from the lobby."

If Fleshler, Rosenberg and the newcomers are right, then change may be coming. But — and it’s a real But — it’s a huge "if."

Audit the Fed Avoid the State, Seek No Popularity