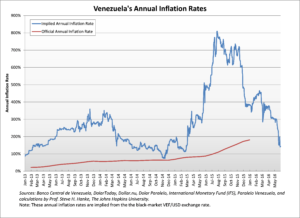 This picture shows inflation from 2013 to mid-2016. (Source.) There were two hyperinflationary episodes in which inflation rates reached over 300 percent and 800 percent per year. 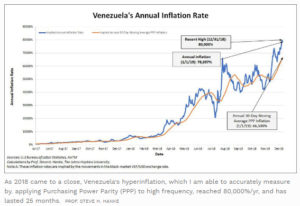 This graph shows inflation from April 2017 to the present. (Source.)

The Central Bank in Venezuela is not independent. The government of Venezuela controls the Central Bank and injects money directly into the economy. This creates the hyperinflation. Henkel Garcia, a Venezuelan instructor, says in 2016 “The government, to cover its expenses, what it does is create base money.” And “The monetary base is growing annually in Venezuela by more than 1,000 percent.”

The rates of increase in the monetary base have risen sharply since 2016. For a picture, see here.

Venezuela is in political-economic collapse brought about by socialist spending and related socialist policies of its Chavez-Maduro governments. U.S. sanctions didn’t cause the collapse, but it may have triggered its final stage and in that way contributed to it. The collapse is the culmination of about 20 years of socialist government policies. Numerous articles document the long-running disintegration of the economy and accompanying protests of Venezuelans that have been occurring for years and years, prior to any U.S. sanctions.

Blame for the Venezuelan collapse can’t be pinned on the drop in oil prices, which is not unusual for oil and other commodities. A prudent government that depends on oil revenues will not raise its spending when oil prices happen to rise substantially, because they typically fall back. Anyway, there are other oil-producing countries who also have been hit by the price drop and they are not experiencing hyperinflation.

Analysis of the contribution of U.S. sanctions on money-printing and the velocity of money in Venezuela is mostly beyond the scope of this blog. My main point is that even had there been no sanctions imposed, Venezuela already was experiencing severe economic stress, hyperinflationary episodes, a long-term trend of higher inflation, all accompanied by large protests, shortages of necessities and political unrest. All of this traces back to the policies of Chavez and Maduro. Up until mid-2017, the U.S. sanctions were against various individuals thought to be corrupt and stealing the country’s assets. The sanctioning of Maduro himself (7/31/2017) was a very serious signal of U.S. intent to overturn the regime; and inflation, already on an upward path as the first graph shows, kept rising to even greater heights. It could be that capital denominated in the local currency began to flee into more stable money once Trump’s targeting of Maduro became clear; however, we also know that the monetary base growth accelerated greatly. The government may have been going all-in to attempt to satisfy the public with its handouts and subsidies.