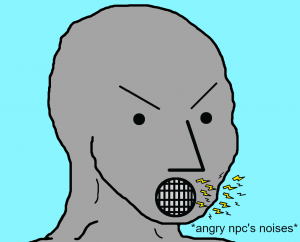 Just this morning, I was called both a “racist” and a “terrorist sympathizer” in two different forums.  While still working on the day’s first coffee.  Not bad, if I do say so myself.

A friend had posted “Happy Columbus Day” and was “corrected” by fellow who wrote “Indigenous People’s Day.”

I offered my own commentary:

“They should celebrate by Land O Lakes putting Mia the Ojibwe girl back on the package, and Washington and Cleveland sportsballers wearing retro uniforms.”

My new friend said, “Or you could just stop being racist!  It’s really up to you!”

“You have no evidence that I’m a racist – unless you’re redefining the word in some weird Orwellian way.

My take on it is that removing all the people of color from store packaging and cultural iconography is itself racist.

Walk through the aisles of the grocery store.  Now you see nothing but white folks on the packaging.  Remove the Indian, keep the land.  There’s another brand of butter right next to the now-genocided Land O Lakes with a white woman on the package.  Think!  What do you think just happened?  It’s Caucasians everywhere on every box.

They should call it Klan Mart or Wallace World: the Whites Only Superstore.

The NFL has the Vikings and the NBA has the Celtics.  They should call them the Aryan Leagues.  College football has the Irish.  The NCAA isn’t the NAACP.  And colleges are now promoting racial segregation like the old days.  What could possibly go wrong?

Maybe you should look at things from a new perspective.  It’s really up to you.”

I also shared this video with him called “When Wokes and Racists Actually Agree on Everything.”

Meanwhile, on a Facebook group about the War Between the States, I shared the story of the Rev. James Mullon, the wartime pastor of St. Patrick’s in New Orleans.  During the occupation, the repugnant military governor, Benjamin “Beast” Butler accused Fr. Mullon of refusing to bury a Yankee soldier.  Mullon quipped, “General, I would gladly bury the entire Union Army, including you.”

For sharing this amusing anecdote (which Butler himself seems to have found quite witty), I was treated to this response by a dour NPC: “Larry Beane wants to murder American soldiers.  Larry Beane is a terrorist sympathizer.”  You can almost hear the computer-generated monotone.

I replied: “I’m in good company.  Google these names: “Geronimo, Red Cloud, Chief Joseph, Sitting Bull.”  They all, of course, were Americans who took up arms against blue-coats.

Idiocracy is a Documentary

A further “discussion” ensued with a small gaggle of mouth-breathing simpletons reminiscent of the movie Idiocracy.  I had to explain that in a so-called “civil war,” both sides are of the same nationality.  Like North and South Vietnamese combatants were both, er, Vietnamese.  North and South Koreans are both Koreans.  Northern and Republican Irish are both… well, you get the picture.  Their response was the laugh react.  I suppose they find it strange to put water on crops, “You mean like out the toilet?  Ha Ha!”

So it is indeed a good day to be called both a “racist” and a “terrorist sympathizer.”

The movie Idiocracy was wrong about one thing: it depicts the passing of 500 years before we have reached the point of societal breakdown and intellectual decay to where a guy whose IQ is 100 is considered to be a genius.  I think we’re there.

This Boat Does Sail, And BeautifullyTexas Says 'No!'