Mask Rebellion…On The Floor of the US House! 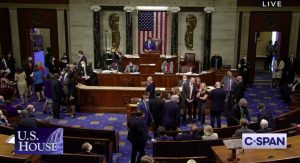 Leave it to Rep. Thomas Massie (R-KY) to take a stand for freedom and liberty! In open defiance of House Speaker Nancy Pelosi’s (D-CA) rule imposing a fine of $500 (second offense $2,500) for any Member appearing on the House Floor without a face mask, Rep. Massie has organized a maskless protest…right on the Floor of the House of Representatives!

As Rep. Massie Tweeted during a series of votes, where he and a group of Members could clearly be seen up front without face masks, at least ten other Members have joined his mini-rebellion right in front of the Speaker’s podium. Maskless, chatting up, fearless. Just daring Pelosi to strike back.

We’ve had enough. We are refusing to wear our masks on the floor during this vote in spite of Pelosi’s threat to take $500 from each of us.

Her rule is not based on science. All you need to know is the mask rule has only ever applied to members when they can be seen on TV !

RPI received word from a contact in one of the protesting Member’s offices that the maskless Members had received a verbal warning – which they have ignored. It remains unclear whether a written warning or a fine will follow.

In February, Texas Republican Louis Gohmert was fined $5,000 for using the restroom without passing through new metal detectors Pelosi had installed in the wake of the January 6th “insurrection.”

On Friday, 14 May, the CDC did a U-turn on its previous policy that vaccinated people should still wear masks indoors and outdoors, stating that the vaccinated could henceforth emerge from their masks in both settings.

Other Republican lawmakers celebrated the CDC’s about-face on masks, declaring “Freedom!” – but it was Massie (and allies) today who put that sentiment into action by openly defying Pelosi’s adherence to the previous CDC guideline.

Now that “the science” has determined that mask-wearing is no longer necessary, can we start claiming that Pelosi and the Democrats are “anti-science”?