The Spiritual Reawakening For Human Supremacy

A spiritual reawakening is occurring in America, one that supports human supremacy.

Looking at the demographics of those attending pro-liberty conferences, anti-mandate marches, pro-life protests, Second Amendment gatherings, and even Trump rallies, most are white and Christian, but there are Orthodox Jews, devout Muslims, even Buddhists, and there are blacks, Hispanics, Asians and Native Americans. What do they all have in common? They believe in a loving God opposing evil.

The imposition of the tyrannical global agenda by the .0001% on humanity is not possible if the technocrats and central bankers are unsuccessful at manipulating the planet’s people to fight among themselves. These diabolical authoritarians must divide and rule the masses to achieve their evil objective of enslaving, injuring and even killing most of the world’s population.

In addition to the 2nd Amendment, the reason why those who refused to close their businesses or churches, inject the clot shots or mask up are not yet in Covid camps like in China is a growing number of people are figuring out the agenda, are not complying and are fighting back. They are drawing on their faith or developing their faith to give them courage and strength.

Exposure of the Great Reset/Fourth Industrial Revolution agenda by independent web sites such as lewrockwell.com informed a lot of people and inspired many to take action. A spiritually-based populist uprising unifying libertarians, classical liberals, and other law-abiding Americans who love God, life and freedom, value independence, want to work, raise families, serve creation and preserve traditional values is the wrench in the gears of the machinations of these godless would be overlords.

A case in point is the Reawaken America Tour founded by devout Christian and business coach Clay Clark. The series of conferences have been effectively alerting and activating Americans by assembling up to 80+ prominent speakers at each of the 13 conferences held around the US since April 2021. Retired Gen. Michael Flynn, also an organizer, always appears and a who’s who of whistleblowers and truthtellers are featured. This includes doctors and scientists who have exposed the clot shots as unsafe, even deadly and promoted alternative effective treatments. Among these are Robert Malone, Peter McCullough, Sherri Tenpenny, the late Vladimir Zelenko, Rashid Buttar, Stella Immanuel; scientists Judy Mikovits and Andrew Wakefield; journalists – Dr. Jane Ruby, Alex Jones; political figures – devout Catholic Robert F. Kennedy, Jr. and born again Roger Stone. Pastors play a prominent role in the two day events speaking and leading prayers.

The attacks on the tour have intensified to where motivated saboteurs are getting venues scheduled to host the conferences to cancel when media or local politicians contact property managers and demonize the events as gatherings of white supremacists inciting violence and hatred. The cancellation by State Street Armory in Rochester only led to more interest and a booking into the larger Cornerstone Church in Batavia.

Clark explains the details to Infowars’ Owen Shroyer at 98:05:

I have been watching these conferences online since they began and attended the Reawaken America conference in Virginia Beach in July. These smears are ridiculous lies and attempts to divide the body of Christ and thwart potential political alliances. If supremacy of any kind is promoted it is that of God and His son, the Prince of Peace, Jesus Christ and humanity. Quite a few speakers and attendees are people of color. A key organizer, Pastor Leon Benjamin, is black. Race is simply not an issue. The satanic globalists know exactly what they are saying and want to provoke a confrontation with Christians.

The energy of the 5,000 audience members and speakers at the Rock Church in Virginia Beach was joyful and inspirational. The predominant shared messages were love of humanity, truth, liberty, and the ideals of America as enumerated in the Constitution and Bill of Rights. Some attendees were learning about the Great Reset, the World Economic Forum and transhumanism for the first time. Others, like me, are informed about the agenda, but understand there is always more to learn and savor the opportunity to network with like-minded souls including vendors selling pro-Christian, pro-America, pro-liberty products. His Glory TV interviewed many speakers which are now available to watch online.

Donald Trump, Jr. and Eric Trump spoke at the Virginia Beach conference. While neither discussed the globalist agenda – nor has their father at his recent rallies – it is interesting they have no problem being associated with these events. But these are not Trump events; they are more like revival meetings for God and the Constitution. It is likely that any attendees who may have cast a ballot for Biden most assuredly now have voters’ remorse.

If I had to sum up a point of view that would generally find agreement among speakers and attendees it is we are likely living in the end times; Bible prophecy is being fulfilled; the “mainstream” media constantly lies or fails to report on critical issues; massive corruption exists at the top of every institution in America and at every level of government; a merger of corporate-government power through public-private partnerships is endeavoring to enslave humanity; the debt money system is funding this power grab constructing world government; and while God is in control and wins in the end, we need to be courageous and take action or else we lose our freedoms.

Mike Lindell has spoken at many of the Reawaken America conferences. The MyPillow CEO and founder of the Frank Speech/Lindell TV media platform is leading the national drive to uncover the 2020 election fraud by getting rid of the electronic voting machines – “melting them down into prison bars” as he puts it – as well as ending “the 100 or more” other fraudulent tactics like drop boxes and mail-in voting used to rig the results. “If we don’t get rid of the machines, it’s over,” says Lindell. “We lose the American dream and we lose our country.” Frank Speech features programs hosted by Brannon Howes, Steve Bannon, Pete Santilli, Diamond & Silk, Stew Peters, and others. The network is extensively covering the now intensifying daily developments to expose and prosecute election fraud and restore honest elections. See this.

Clark, like so many others, has been sued by Dominion Voting Systems and says his legal fees are $3,000 a day. Yet the government itself – the Cybersecurity and Infrastructure Agency (CISA) under the Department of Homeland Security (DHS) – acknowledged in a June 3, 2022 report that these machines have nine vulnerabilities.

Nonetheless, Clark’s highly developed sense of humor remains intact. He is gifted with an unusual and remarkable ability to convey the most frightening information and somehow make it sound amusing without betraying his seriousness about his warnings regarding the threats to life and liberty now confronting humanity now. Clark posts many daily videos on his Thrivetime Show channel. Many recently feature Yuval Noah Harari, “spiritual” advisor to Klaus Schwab, Bill Gates who says humans are hackable animals and Jesus Christ is fake news:

Clark, Flynn and other speakers educate their audiences and lift their spirits but emphasize the importance that individuals must do what they can with the knowledge they possess. “Hope is not a valid strategy,” Clark says. “You’ve got to take action.” Three more events are planned. 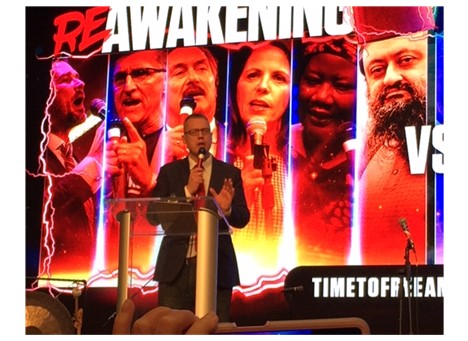 Ginny Garner is a writer, editor, researcher, and music lover. She took the red pill many years ago and has been an avid reader of Lew’s website for the last 22-23 years. Write her at [email protected] .