Monkeypox and the Bubble Boy 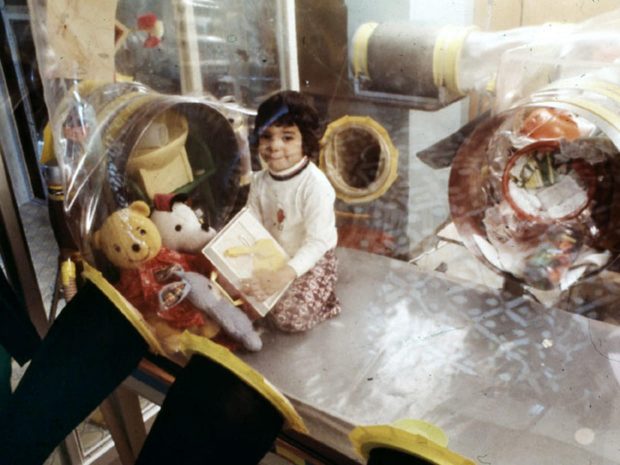 The W.H.O., C.D.C. and F.D.A. bureaucrats — especially head W.H.O. bureaucrat Tedros — are attempting to jawbone monkeypox into the next World Health Emergency.

Although Tedros’ advisory committee voted nine to six against declaring the Emergency, Tedros declared it anyway. As a measure of his legendary “honesty,” he called that “breaking the tie.”

With their handling of the COVID pandemic, the W.H.O., C.D.C. and F.D.A. bureaucrats proved beyond doubt that they are either nearly completely ignorant of human ecology and immune functioning or are unable to communicate coherently about them. Probably both.

Or maybe they were just lying. Which do you suppose?

1. Violating over 100 years of epidemiology and the C.D.C.’s own Medical Examiners’ and Coroners’ Handbook as well, the health bureaucrats humongously inflated their case, hospitalization and death figures by reporting them “with COVID” rather than the traditional and scientifically accurate “from COVID.”

This was clearly explained by propagandist Deborah Birx like this – – –

“So, I think in this country we’ve taken a very liberal approach to mortality. …Right now…if someone dies with COVID-19 we are counting that as a COVID-19 death.” SEE her confess — HERE.

“The way in which we code deaths in our country [Italy] is very generous in the sense that all the people who die in hospitals with the coronavirus are deemed to be dying from the coronavirus.” — telegraph.co.uk

Subtle but extremely effective if you want to mislead people.

For context, folks also died “with hospital,” “with nursing home,” “with doctor,” “with ventilator,” etc. One famous case: A Florida biker, killed in a crash, had COVID listed as the cause of death on his death certificate. This practice was as common as politicians and bureaucrats lying.

The result was at least an eight-fold (800%) inflation of the COVID figures reported by the M.S.M (Main Stream Media) including facebook, twitter, the Johns-Hopkins “WORLD SICK MAP“, etc.

And we didn’t even mention all the censorship of dissenting views.

It’s disheartening that most of the medical establishment went along with this ruse.

2. They also inflated the fear-factor by ignoring the 100 year old scientific practice of differentiating between “infections” (minor discomfort) and “cases” (with reported symptoms.) The numbers were further seriously inflated by comprehensive area-wide geographical testing with an unrealistically sensitive test.

Normally folks with, say, the sniffles, maybe a cough etc. would not seek medical attention nor, even if they did, would they necessarily be tested and counted as cases, let alone folks who were “asymptomatic,” that is, had no symptoms. Previously these asymptomatic folks wouldn’t have been tested and recognized at all. And as you’ll see, that’s good. 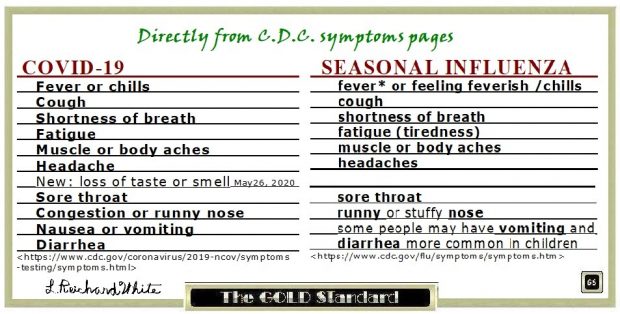 Si Is it COVID or Is it the Flu? Not Even Your Doctor Knows for Sure.

And since, as COVID cases increased, the seasonal flu all but disappeared all around the world, either COVID cured the flu or a LOT of the 206,000 yearly U.S. flu cases were counted as COVID instead and were likely another source of those 800% inflated COVID figures. Take your pick.

Did I mention that the numbers they feed us are NOT real hard-counts. They’re generated by computer algorithims, based on partial counts and programming assumptions, sort of like election results. And since 45% of FDA funding comes from the drug companies they’re ass-u-me__d to regulate — and it’s to the bureaucrats’ advantage to have health emergencies — how dependable are their algorithmic totals? We already have a warning from the at least 800% inflated COVID numbers.

To the extent it’s real, this so-called “pandemic” is largely a phenomenon created by unheard of levels of intensive testing uncovering previously unrecognized asymptomatic folks, calling them “cases” and then narrating it into existence.

But does this prove all those health bureaucrats at the W.H.O., C.D.C. and F.D.A. are ignorant of human ecology? Or maybe lying?

Once you begin to think about dis-eases, there’s an almost always neglected context – – – we are not alone in our bodies. We’re accompanied by an incredibly large array of microorganisms. In fact, current estimates suggest that the number of those companions significantly exceed the number of our own cells.

For the most part, we coexist peacefully and even aid each other. The microfauna in our lower intestinal tract are necessary for digestion for example. It’s to tune them up that some folks take those probiotic supplements.

Clearly we can’t get rid of these little guys.

The thing is, when some of that overwhelming host of fellow travelers get out of line — or we’re invaded by undesirable migrants — our millions-of-years-old immune system automatically takes care of things and we usually don’t even notice.

In fact, some of the undesirable migrants are always around. This was just verified again in what would be a disturbing discovery if we didn’t understand that our veteran immune system regularly keeps things under control.

A current reminder was the discovery, verified by the University of Florida, that some childrens’ COVID masks had trapped some rather nasty migrants. For example, organisms that can cause tuberculosis, Legionaires disease, peneumonia, meningitis, peridontal disease, strep throat, acne, and many others.

The good news is that none of the children had symptoms of any of these diseases. Although they were infected, they were “asymptomatic,” that is, showed no symptoms.

In fact, most of us are chronically, 24/7, infected with some of these bad boys but our veteran immune system is also on duty 24/7 and so we are “asymptomatic” and rarely notice. That’s as it must be or the human race wouldn’t have survived.

So when discussing any dis-ease, the question isn’t “Do you have dis-ease organisms in your body?” — you certainly do — but “Are there enough of these organisms, alive, well and strong enough to overcome your immune system, and cause symptoms, and can you pass enough of them on to infect others?” With that in mind, let’s take a look at the COVID tests we’ve all come to know and love – – –

Dr. Kerry Mullis — who won the Nobel Prize for developing the PCR test — said it’s too sensitive, especially when run at high amplification cycles, to be used to make primary diagnoses. None the less, that’s the way it’s usually being used.

The other thing is, the test is primed to look for one or sometimess two short DNA sequences and there’s a lot of dead cell debris in real-life samples, which sometimes match the PCR’s target sequence, thus giving a false positive, especially at high amplification cycles.

The C.D.C. and W.H.O. told folks to run the tests as high as 45 amplification cycles and later, 35 cycles, both extremely high. The problem is that a sample that tests positive for an organism above 25 amplification cycles can’t be cultured. That is, the virus, if it actually exists in that sample, can’t be coaxed to reproduce, even in favorable laboratory conditions.

And of course, if those bad boys try to infect us, they have our veteran immune system to contend with.

The logical conclusion is if the virus can’t even be cultured in favorable laboratory conditions, it won’t be able to reproduce in the hostile environment of the human body and clearly can’t be meaningfully transmitted.

In fact, that argument found its way into a French Court, which correctly asserted that if the PCR test was to be used as an excuse for lockdowns — which have been proven ineffective in most circumstances anyway (Peru, with the world’s strictest lockdown and world’s highest death rate is a good example) and often terminally damaging to large swaths of the world economy — the tests should be required to run at no more than 27 amplification cycles.

And remember, previously they wouldn’t be testing everyone anyway and so most of these benign infections didn’t come to anyone’s attention. Under the current non-scientific regieme and against Koch’s 100 years of epidemiological standards, however, they’re counted as “cases.”

With this kind of operation, if they wanted to, they could pick almost any micro-organism and turn it into a World Health Emergency.

Now keeping the tuberculosis, Legionaires disease, peneumonia, meningitis, peridontal disease, strep throat, acne, etc. in those kids masks in mind, the “pandemic” generating possibilities of the PCR test boggle the mind. They might even enable a highly unlikely-to-be-transmitted microbe like, say, monkeypox to be narrated into a World Health Emergency.

Not too far-out logic suggests that if we forget our 24/7 millions-of-years-old immune system and listen to the ecologically ignorant W.H.O., C.D.C. and F.D.A. bureaucrats, we should all emulate David Vetter, The Boy in the Plastic Bubble. 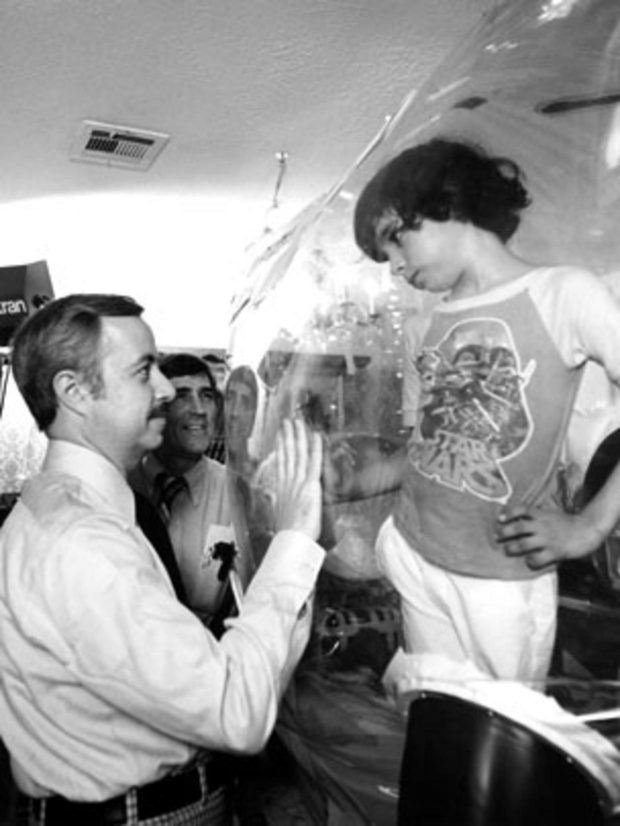 Previous article by L. Reichard White: How Our Elected Prevaricators Sidestepped the Constitution and Turned the American Dream into the American Nightmare