The End of Cryptocurrency Coming?

I warned ion the private blog that cryptocurrencies may end up being suspended. The excuse will be Russia and the news is out now that Biden will sign an Executive Order to regulate cryptos because Russia can use it to circumvent sanctions. Not only is Biden authorizing the regulation of digital currencies, but he is also instructing to move forward with a central bank cryptocurrency. Once that is done, all other cryptocurrencies will be seized and folded into the government’s crypto. There will be no competition. Money historically has also been the Divine Privilege of Kings and Tyrants.

Biden is now proposing to ban all Russian Energy sales to the West. Prices will rise sharply still and Biden is blaming Putin claiming this is the “price of freedom” for Ukraine which is all BS so governments can avoid responsibility for the collapse in the supply chain thanks to COVID and their shutting down fossil fuels for Climate Change.

Now it is time to blame Putin for the continued rise in gasoline which is their agenda to save the planet. Their clock in NYC that they were telling the world we had only 7 years left if we did not ban fossil fuels is being accomplished under the pretense of “freedom” for Ukraine.

Macron desperately needs this war to fulfill his agenda and role in the grand scheme. Macron has been arguing for a European Army and they need this war to justify not NATO, but a new EU Army that is not bound by NATO rules and treaties. The EU Commission has been working on its proposal to establish a joint budget for the Eurozone since 2017, which is the endgame of federalization. The aim was to cement the monetary union in place and thereby prevent any more BREXIT nonsense from their view. Now they are pushing to issue an EU Bond and they are now using this war with Russia as a power grab to federalize Europe. 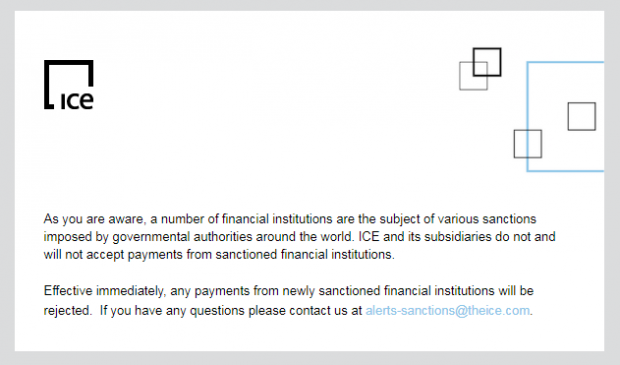 We now have private companies throwing Russians out in every possible context. The Russians have replaced the Jews of Germany. They are now regarded as swine and nobody should do any business with them whatsoever. This war is part of the Great Reset. They can no longer fund the governments and Keynesian Economics has collapsed. This is all part of the agenda and it is being carried out in sequence. 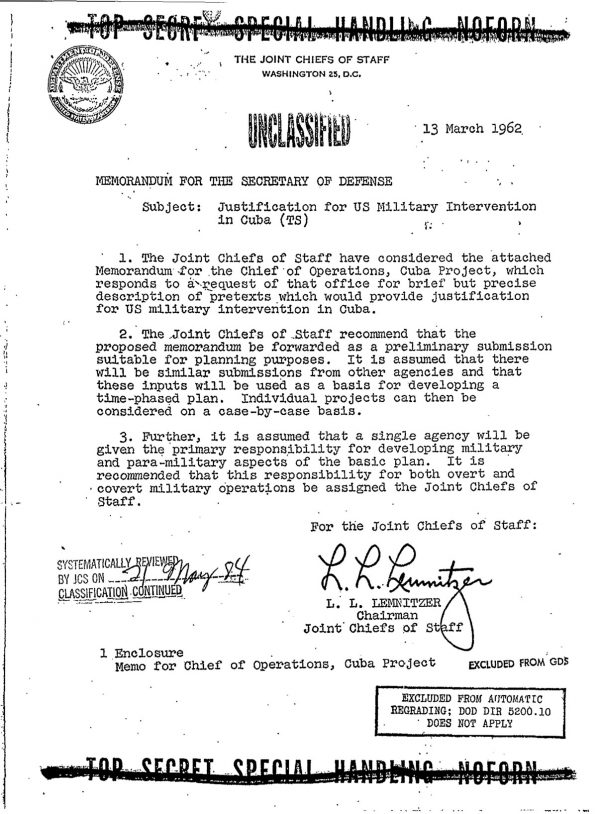 Just like Project Northwoods that President Kennedy rejected, they proposed killing Americans and then blaming it on Cuba to justify an invasion. They will now carry out a cyberattack and blame Russia. Putin offered peace terms that were reasonable. Let the two provinces become independent as they sought since the 2014 revolution, and relinquish any claims to Crimea. Zelensky takes his orders from the West and flatly rejected any proposal. Now Zelensky claims he is open to discussions. If he does not agree insisting that the only thing acceptable is total withdrawal by Russia which he knows is impossible, then this is a warning he is taking his orders from the West – not his people. This war is desperately needed to federalize Europe, default on national debts that can no longer be serviced, and end fossil fuels for the Climate Change zealots. Will they create a false flag and claim

Russia violates whatever agreement if it can be made?

The Ukrainian people are pawns in this political game for the Great Reset and the dream of a one-world government. They have made it very public. The US will no longer be a superpower, and democracy will be terminated. Already, the EU is the model. The head of state nor the European Commission stand for election – ever. Trudeau in Canada has even publicly committed Canada to Schwab’s Agenda 2030.

These sanctions and private aggression toward anything connected to Russia will drastically implode the World Economy. There are Russian private citizens who own gas stations who are being targeted. NJ Governor wants to shut down Lukoil gas stations. This is no different from the discrimination against blacks or the Jews. But it is now all perfectly OK – obedience to authority!

This is all shaping up as intentional. The same agenda I have warned about that, especially Europe can no longer fund its government because of perpetual negative interest rates. I have reported that the top US banks were not accepting European sovereign debt as collateral. The crisis of ver debt in Europe began with the REPO Crisis in August 2019 when US banks would not lend overnight to European banks. That spread to the Sovereign Debt.

This war is being deliberately orchestrated. There is nobody interested in calming the situation. Every excuse to raise the Iron Financial Curtain is being carried out. The sanctions imposed on Russia for Crimea are still in place. Once sanctions are imposed, they will NEVER be removed. China is now moving full-steam-ahead to replace SWIFT, which stood tall when Obama wanted to remove Russia and they refused to allow SWIFT to be used for politics. Now SWIFT has lost all integrity and the price we are witnessing is the collapse of the world economy.

The US and Europe will become isolated and the world is being torn in half. This is what our computer has been forecasting for post-2032. Our computer has never been wrong on its major forecasts for it is NOT biased like human analysts. Some are reporting that Russian businesses in Germany are being attacked with windows smashed. Instead of the Jews, this time it will be Russians. 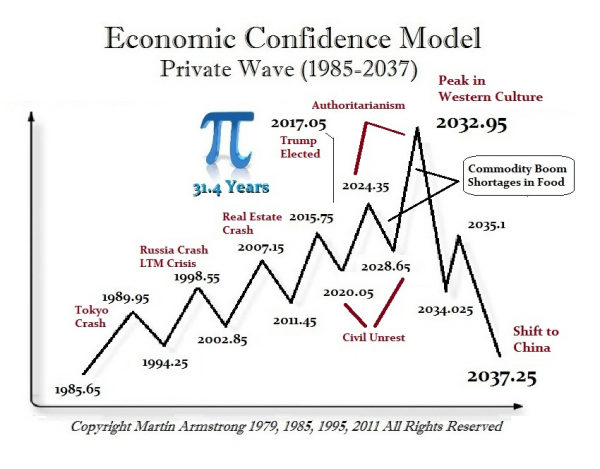 This forecast was made back in 1985. We reported that 2016 would be the first time a non-politicians would win and that turned out to be Trump precisely to the day of the Pi target. From 2020 we would see a commodity boon on shortages, rise in civil unrest, the disease cycle, and our war cycle were all coming together. We also warned that post-2032, China would emerge as the new Financial Capital of the World. These forecasts were not personal opinions. NOBODY can make correct forecasts for so many years based upon personal opinion. Anyone who claims to be so lucky is making that up. 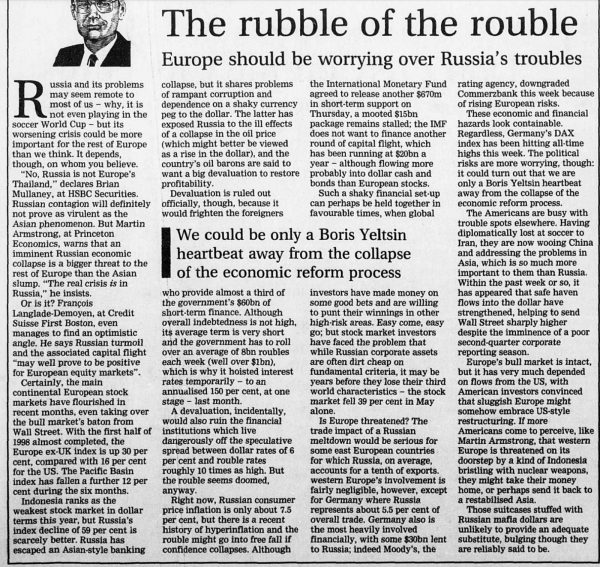 The government wanted our models when they saw they were even forecasting the rise and fall of governments. We forecast the fall of Russia in 1998 which led to the collapse of Long-Term Capital Management and the first bailout by the Federal Reserve. (Watch interview on Highwire)

For all of those who said Bitcoin replaced gold and the dollar, if they didn’t bother to look at a chart, it has been declining since last November when this plot to create a war was hatched.