Two recent examples show that scientific integrity is pretty much dead worldwide. There are only a few people left who support these principles and they've been marginalized by all mainstream leaders.

In this article, I am going to show two simple, but very important, examples that I believe prove, without any doubt, that scientific integrity is dead. I cannot explain the lack of outrage from the mainstream scientific community any other way.

The Journal of the College of American Pathologists published a shocking new report on Monday, Feb. 14, 2022 about the cases of two teenage boys who died following mRNA COVID-19 injections.

The report’s lead author is Dr. James Gill, the chief medical examiner for the state of Connecticut and the 2021 President of the National Association of Medical Examiners.

Both boys died in their sleep less than a week after the second dose, and neither had any known health conditions prior to death. In these cases, autopsies of the two teenagers found evidence of myocarditis.

“The myocardial injury seen in these post-vaccine hearts is different from typical myocarditis and has an appearance most closely resembling a catecholamine-mediated stress (toxic) cardiomyopathy. Understanding that these instances are different from typical myocarditis and that cytokine storm has a known feedback loop with catecholamines may help guide screening and therapy,” the report concludes.

This observation is confirmed in another recently published paper by Flavio Cadegiani, “Catecholamines are the key trigger of mRNA SARS-CoV-2 and mRNA COVID-19 vaccine-induced myocarditis and sudden deaths: a compelling hypothesis supported by epidemiological, anatomopathological, molecular and physiological findings.” Dr. Peter McCullough is familiar with Flavio’s work and told me he thought it was brilliant.

So the vaccine killed two kids in Connecticut which has around 1% of the population of the US.

Isn’t it odd that we are seeing multiple reports from one small state and complete silence from everywhere else?

Did Connecticut just get unlucky? It appears not.

Let’s extrapolate this to the US and estimate around 200 kids in the US have been killed by the vaccine.

Some people may say that that isn’t a valid extrapolation.

OK, then try this one for size: 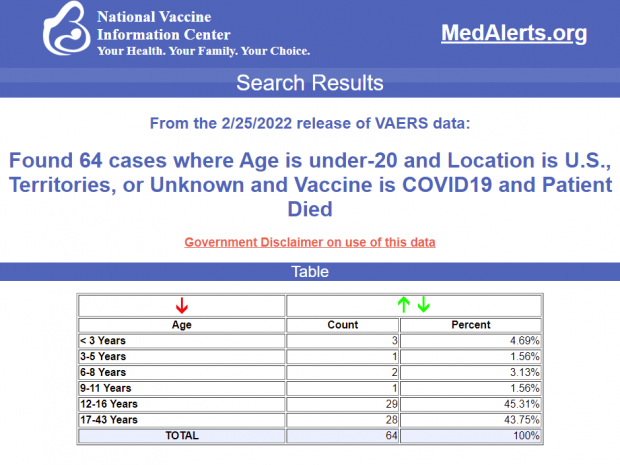 VAERS is underreported by a factor of 41 based on my calculations. This number was recently confirmed by Joel Smalley who analyzed the Massachusetts death data. He got 40.9 (from 1759 actual deaths/43 VAERS reported deaths) which I think is close enough to my estimate.

Even if you take a very low-ball estimate of the underreporting factor (URF) of 20, you still end up with 1,280 child deaths, a very troubling figure.

So our simplistic 200 estimate just from linearly extrapolating the known myocarditis deaths in CT was an underestimate (as we expected).

Is anyone publicly calling for a halt to these vaccines for kids? No way. Not a chance. They are nearly all pushing for giving it to even younger kids.

Is anyone calling for amending the label on the vaccine to note this new information? Are you kidding? No way. AFAIK, the label hasn’t been amended in over a year.

Timeline: The Crimean Referendum The End of Cryptocurrency Coming?