Forget the great teeming horde of anti-trust lawyers.  That is a beast better starved than fed.  And for the love of progress and prosperity, please, oh please, do not turn to federal regulators and their plague of unintended consequences.  In fact, the problem with the big internet censors, de-platformers, information monopolists, and enemies of free speech is much bigger than Section 230.

The power Facebook, Amazon, Twitter, Google, and Apple (FATGA) have amassed to shut down political speech and conceal the corruption of their political darlings can be traced directly to the Deep State Money Manipulators.

That is the name my co-author Bill Haynes and I have given to the Federal Reserve in our new book The Last Gold Rush… Ever!  It is a deep dive into the decay of the dollar standard and the convergence of accelerants that are about to inflict unimagined financial pain on the lives of the American people.

As we explain, The Deep State Money Manipulators have been hiding in plain site for over a hundred years.  During that time, they have been serial bubble blowers, inflating the dot-com and housing bubbles.  They have quietly overseen the destruction of the dollar’s purchasing power.  They have pumped unimaginable wealth to crony banks and played an essential part in America’s growing income inequality.  Their interest rate manipulations have encouraged the formation of debt and discouraged capital formation, which is the engine of growth.

The Deep State Money Manipulators have enabled the continuous expansion of the State and even provided means for the prosecution of the State’s undeclared wars. They have secretly provided trillions in loans to private banks and corporations—even to foreign ones.  They have desperately resisted auditing, even as they made “boom and bust” decisions for the entire nation with the sole aim of providing cheap liquidity to the banking cartel that created them.

That only begins to catalog their destructive works.  Few have also detected the hand of The Deep State Money Manipulators in Big Tech’s arrogance and accretion of power over the political landscape.  But the corruption of finance has enabled FATGA’s assault on free speech, as former Reagan budget director David Stockman points out.

The trillions of dollars the Money Manipulators have been stovepiped to Wall Street and Silicon Valley have unshackled “too rich millennials and thirty-something brats who are intoxicated by unearned wealth,” writes Stockman in his newsletter Contra Corner.  The flood of Deep State made-up money has freed Big Tech “from the job of profit maximization to indulge in political virtue-signaling and moral smuggery.” 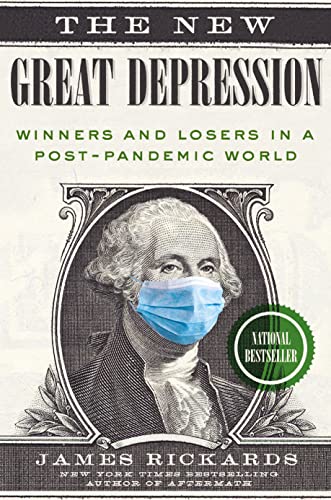 When the bubble pops, the masters of the tech universe will have to make money the old-fashioned way.  That mean no longer buying back shares with Fed-contrived credit that is the next-closest thing to free, or by cashing in stock options at inflated multiples that could not survive in a sound money environment

Instead, they will have to put out the welcome mat for new business, yes, even from companies like Parler.

Big Tech’s intensifying political meddling and aggression arises from a pervasive culture of self-indulgence that has been enabled by what is now the mother-of-all-speculative bubbles….

A rip-roaring stock market crash is all it would take to remind top management and boards that the business of business is business—not functioning as self-appointed guardians of politically correct speech and “safe” assembly by the public.

In the meantime, thanks to the Deep State Money Manipulators, Big Tech has vouchsafed us what looks to be the biggest-spending administration in history.  No one should be surprised – “Oh my god!  Biden is going to govern as Biden!” – when last year’s $3.1 deficit is surpassed.  Or when Uncle Sam’s creditors around the world realize as one that America’s problem is not liquidity.

The dollar price of gold is the world’s assessment of the quantity and quality of the dollar.  That is why we describe events that are now beginning to unfold as The Last Gold Rush… Ever!  It is about financial events that occur at the crossroads of history.  When a new global reality topples an old financial order.  When the State’s debts cannot be serviced. When the people realize they cannot trust the monetary system.

Some, the prepared few, will prosper during The Last Gold Rush… Ever!

Many will be impoverished.  They will have The Deep State Money Manipulators to blame for their woes.

Previous article by Charles Goyette: David Stockman on ‘The Last Gold Rush… Ever!’