Was Coronavirus a Biowarfare Attack Against China?

[The following is the republication of several long and very detailed comments by an unidentified purported expert on biowarfare that originally appeared on a recent thread of the Saker blogsite.]

I’ll throw my 2 cents in here. I have zero proof other than my gut feeling that this is a bioweapon. I do have 40 year of biodefense research experience behind me and worked at Fort Detrich on bacterial vaccines where I developed my own aerosol infection routes and developed multi-species models of pathogenesis to establish correlates of immunity. Because I was a one-stop shop doing everything including animal care, aerosol exposures, sample analysis, necropsy, and histopathology, etc. plus I had research programs in endemic areas studying the immunopathological response in human populations to establish immune correlates of protection for candidate vaccines all for the Biological Defense Research Program (BDRP).

I recall the early years when the Department of Homeland Security was stood up and they got the lion’s share of poorly performing ciivil servants un-fireable under the then OPMA policies. I was brought in as a technical expert as we were in dire straits for funding so I (and others) was lent out as a research prostitute. This is a little known problem with civil service employees. They are impossible to eliminate and generally rise to levels where they can cause the most damage. However, an opportunity arose whereby agencies in the Federal government had to contribute bodies to the new Department of Homeland Security (as no new vacancies were created when the agency was stood up meaning everyone had to sacrifice personnel) so most, if not all, employees sent to DHS were the worst of the worst. However, the DHS labs (specifically NBACC) also tied into some nefarious microbiologists working at the CIA (ostensibly part of DHS) and it is an understatement to say that what I saw being proposed horrified me. That work, I am certain was performed at Battle Memorial Institute in West Jefferson, Ohio under a DHS contract doing the work for the CIA under the auspices of NBACC. As I was very vocally opposed to this stuff I was removed from the secure access at DHS but not DoD to the offensive work which I had pointed out was not only illegal but unethical. I have since retired now more than 10 years and am far away from all of that. I won’t say more as they will reach out and seek retribution. But, if you look hard enough you can find still on the internet some references. There are some pissed off people out there should anyone care to actually do some leg work and try and figure this out. But, our news people no longer does this work so there is very little possibility of ever learning the truth. 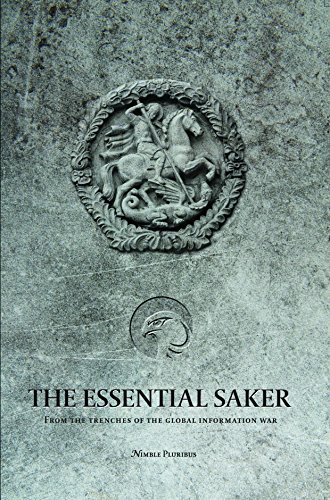 THE ESSENTIAL SAKER: f... The Saker Check Amazon for Pricing.

However, that said, I notice some interesting things with COVID-19, that perked my ears up a bit. Yes, it could be a natural infection jumping species from bats to humans with a probable intermediate host, under conditions of human encroachment into world habitats. It is actually most likely to have been that, except for the strain differences being observed. That leads one to believe if it is in fact true, and I have no reason to doubt the Chinese on this, that it originated outside of China and it seems likely to have originated in the US. If, in fact, the US has 5 strains currently and China only one then it must have been percolating in the US for some time before it arose in China. Likely, deaths in the US were attributed to other diseases such as influenza and only retrospective sampling will determine this. It would be interesting to do a combination GPS-Molecular biology tracking of strains over time and distance. Also, a definite genetic analysis of strains over time would also be beneficial and can be done easily on every isolated strain. This would have value in attributing the course of the disease over time as part of a natural history study of the virus. We would need access to all samples of every lung disease related death for the past 12 months to be certain to track all potential deaths. NBACC is the key to figuring out what nefarious stuff was being funded.

It is possible that this virus has mutated over time to become more virulent. In particular engineered strains are generally unstable over multiple passages through multiple hosts. In my experience when testing strains for pathogenesis and lethality it is wise to first passage a frozen isolate several times through a susceptible animal host to regain full strength. If you test a lab isolate (usually frozen or lyophilized) generally it is wimpy unless you passage it at least 3 passages through an animal model. The worst strains are always those recovered from humans who died from the disease and not field collected strains. If this was perceived to be a useful agent from the likes of Bolton or Pompeo, who are terrible and evil people, then it is conceivable this was thought to teach the Chinese a lesson in economics. You have to be a complete idiot to release a virus for which you have no effective countermeasures but this administration seems to be filled with complete idiots. So, expecting normal behavior from these people is futile.

It could have been released during the 7th CISM military games held in Wuhan October 18-27, 2019 and that fits perfectly into the time scale for the actual infections. Now interestingly enough, I was a participant in several CISM competitions in Europe for skiing (I was on active duty for 26 years) so I am very well versed in who these athletes are. In general the best are Olympic competitors who are ostensibly part of the National Guard of their states who pay for their training by extended military active duty periods where their sole job is sports training. I used to lose every year to one of these guys and generally I placed a distant second place in cross country skiing. I also participated in the biathlon competitions and our soldiers were the very top level because they were in fact Olympic athletes. Rumor is that the US participants at CISM were atrocious which is very atypical so one wonders who these “athletes” were. I am reminded of the US military mission in Brazil to help flood victims which coincidentally was the exact same time that all the power transmission stations in Venezuela were destroyed. So, again a hackle or 2 rise when I heard about that. However, it is the perfect opportunity to release a virus on a target population.

I will also like to add that not all biological warfare agents are lethal. In fact, the worst are non-lethal as it consumes vast amounts of resources in treatment and lost productivity. Deaths are actually cheaper. So, a high communicability, low lethality disease is perfect for ruining an economy. As Trump’s administration claims they are waging war against economic enemies (currently China heads the list) using all possible actions. This fits perfectly into that; however, it may end up destroying the American economy which would be ironic.

I believe the Chinese response was exactly what a country would do if they were attacked with a bioweapon which explains a lot of their actions. I do not believe it was an accidental release from the BSL-4 labs in Wuhan. In fact, this may have been an irresistible opportunity similar to the alleged Novichuk release just 8 k away from Porton Down laboratories (the UK Fort Detrich). Interestingly, the potential release from PDL was never put forward as a logical explanation. Anyway, it sticks me that the CIA seems to have developed a pattern over time. As long as I am pushing my gut feelings I will throw out there the potential for a bioengineered adenovirus with c-fos and c-jun over expression which would cause sarcomas. That work was all published at the National Cancer Institute located where? Fort Detrich. I am certain it is just a coincidence. I can imagine the cackling going on at the CIA when planning this operation and again the coronavirus operation(s). I believe there were at least two attacks with Iran being the second and perhaps North Korea as well. However, evidence against it being a bioweapon is Russia, Venezuela, and Cuba are minimally affected. This could mean effective countermeasures or botched attacks. It is inconsistent though with the way the CIA operates.

Adenovirus is another virus similar to coronavirus in usage and easily aerosolized. I have made my own for over expression of medical treatments for wound infections. Has anyone other than myself noted that so many enemies of the US have died from sarcomas particularly in South America? My point is perhaps this stuff has been ongoing for quite some time and with some fairly good results. So, familiarity breeds contempt so as they gin more experience and begin to think this is good stuff, it is not out of the realm of possibility that this is in fact a bioweapon. That Iran was hit so hard is another hackle rising. It is just simply too good (for the idiots in the US government) to be a coincidence.

So, we are left with some interesting problems about this virus. Where was patient zero in China. What will be the results if a natural history study is conducted correlating geolocation, strain identity, severity of disease over time? Will that work be prevented? If so, that is yet another reason to be suspicious. Will it continue to mutate and what will be the outcome of this? Lots of good stuff to examine here and it will keep a lot of people busy for years.

Nothing To Fear But Fear Itself (& the End of the World’s Existing Social Order) Detect, Deter, and Annihilate: How the Police State Will Deal With a Coronavirus Outbreak