The Elite Controllers Fear the Individual and Individual Intelligence

This once great country of America has gone through many changes, and these changes, while implemented by the design of its true rulers, are not understood by the huddled masses that have been taught to accept mediocrity as desired normalcy. The ruling class fully understands that the only way to control people, and to finally control the world, is to stifle individual excellence by creating a society that refuses to think. This has been accomplished through planned conflict, the instilling of fear, the total control of education by the puppet state, by building dependence through public welfare, and by dominating most all positions of power in a myriad of state, corporate, and important intellectual appointments.

“At its root, the logic is that of the Grand Inquisitor, who bitterly assailed Christ for offering people freedom and thus condemning them to misery. The Church must correct the evil work of Christ by offering the miserable mass of humanity the gift they most desire and need: absolute submission. It must “vanquish freedom” so as “to make men happy” and provide the total “community of worship” that they avidly seek. In the modern secular age, this means worship of the state religion, which in the Western democracies incorporates the doctrine of submission to the masters of the system of public subsidy, private profit, called free enterprise. The people must be kept in ignorance, reduced to jingoist incantations, for their own good. And like the Grand Inquisitor, who employs the forces of miracle, mystery, and authority “to conquer and hold captive for ever the conscience of these impotent rebels for their happiness” and to deny them the freedom of choice they so fear and despise, so the “cool observers” must create the “necessary illusions” and “emotionally potent oversimplifications” that keep the ignorant and stupid masses disciplined and content.”
~ Noam Chomsky, Necessary Illusions: Thought Control in Democratic Societies 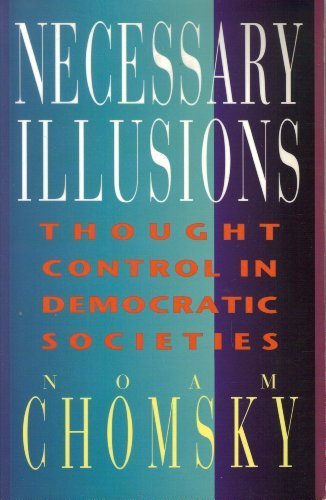 This quote by Chomsky is correct in that it describes the current condition of the general populace, but is incorrect in that it claims free enterprise is the problem. There is no free market in this country, and there has not been a free market for many years. We live in what is best described as a fascist oligarchy, one that relies on the premise of state and corporate partnership. Without that dynamic in place, the situation would not be as dire as it is today.

It is important to state that I believe the common people are not incapable of intelligent thought, but have given in to the pressure from their self-appointed overseers, and accepted a subordinate position in society. They have been programmed to suppress their curiosity, and therefore have chosen to hide from responsibility. I refer to this attitude as a fear of freedom, as freedom requires much work, a strong moral base, an active intellect, and constant defense of self-rule. It is difficult to achieve and even more difficult to keep, so most are willing to take the easy way. By doing so, tyranny of the masses is always the resulting societal structure.

In any society such as this, what the common people perceive as freedom is in realty a type of controlled servitude. While this should be easily recognized by most, it is not, and this is mainly due to a fear of the truth. So pretending that the threat does not exist allows the underclass to avoid conflict, but only temporarily. This avoidance is a natural protection measure, but in the case of a slave society, this hiding from responsibility by the people will eventually become deadly.

The monopoly of power that is held by the few over the rest of society is all consuming, and the ultimate control sought by these elites is getting ever closer to fruition. It has been affected over long periods of time through incremental measures. It did not happen overnight, but over centuries, and at this point, the final objectives desired are within sight.

This is the most dangerous time for man as I see it, as the elite design for future economic decision-making for all is to be placed in the hands of so-called chosen experts, with power over the entire world economy. All economic decisions are to be based on a controlled allocation for society, which is simply centrally planned socialism, with a top-down hierarchy of control by the few. This ruling system is known as Technocracy, and when implemented, it will be the end of liberty.

I do not make these assertions lightly, and this is not theory, it is the current state of affairs. Consider the division among the general population, and the hatred amongst the masses. This is not natural, but has been put in place purposely to achieve a particular outcome by those controlling the now ignorant and indoctrinated general population.

The new world order that is desired by the ruling class is getting ever closer to becoming reality. This is not conjecture or some wildly fantastic science fiction, but is a plan that is gaining momentum due to a society consumed by blind indifference.

In past history when a ruling class went too far, and exceeded all the bounds of accepted power, the people arose, and a new system emerged. But can that happen in this country in this time of extreme political change and concentrated power? The creation of conflict that is evident today is a driving force in bringing about a world run by the few. And the common people are already relegated to a position of cogs in the wheel of society, as opposed to thinking for themselves and taking control of their own lives. This phenomenon must change in order for freedom to survive, and a reversal of the power structure must be forthcoming, if Americans are once again to control their own destiny.