A review of Recarving Rushmore: Ranking the Presidents on Peace, Prosperity, and Liberty (The Independent Institute, 2014) by Ivan Eland

The annual veneration of American monarchy–“Presidents Day”–has passed again. While still officially called “Washington’s Birthday” by the general government, the American public has embraced the idea of honoring the executive branch by shopping for furniture, jewelry, or cars. George W. Bush encouraged us to shop after September 11, 2001. He might as well have issued a presidential bull.

This is a curious holiday for Americans, one that is so anti-republican that it would have been universally rejected by the founding generation. But we have grown to love our elected kings. They are supported for life after leaving office, command six figure speaking fees, and are showered with praise at official state funerals when they die. Some get their own action figure. Even our former colonial overlords in Great Britain don’t spend this much time worshiping a real monarchy. 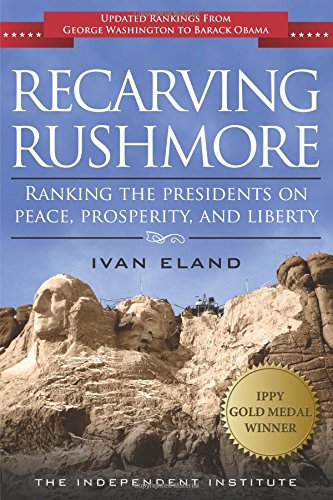 Foisting this much attention on the executive branch has led to an unhealthy and distorted understanding of American politics and government. Our collective history is dominated by presidential administrations, the “activity” of the executive office, and the cycle of presidential elections. It has also led to mountains of literature on American presidents, from the banal, pedantic, and trivial, to sweeping generalizations on presidential epochs. Anyone studying the middle of the nineteenth century has to wrestle with “The Age of Jackson.”  Most of these works are not worth the paper and ink used to print them, and few are groundbreaking or thought provoking studies that need to be taken seriously. Most modern historians are an incestuous and uncreative lot who simply regurgitate the fashionable opinions of the day. When they tell you to “read a book” as a retort to a serious question, they admit to not having an original thought. And that “book” is typically the one stamped “acceptable” by historical group-think.

“Presidential rankings” suffer from the same historical ignorance. Historians generally consider the “best presidents” to be those who did the most harm to the United States Constitution, the document each swears to uphold and defend before taking office. That doesn’t matter. The ends justify the means. Who cares if Franklin Roosevelt’s “Second Bill of Rights” would destroy every vestige of whatever is left of the original Constitution? Does it provide “social justice” or “equality” or “economic security?” More important, both parties often wonder if such a presidential edict can create an electoral advantage. Ideology trumps both restraint and the Constitution itself in the modern era.

Can there be a better way to grade the presidents? Ivan Eland argues absolutely in Recarving Rushmore. He judges forty-one of the forty-three men who have held office on a simple formula: how did they maintain or destroy peace, prosperity, and liberty? This is a unique measuring stick to determine effectiveness, one that flips “executive activity” on its head. If we are going to embrace executive government, we should consider what type of activity we want from the president.

Eland’s best presidents are not the typical top four. John Tyler, Martin Van Buren, Grover Cleveland, and Rutherford B. Hayes fare well in his study, while Lincoln, both Roosevelts, Jackson, and Wilson are kicked to the end of the list, joining longstanding bottom dwellers in James Buchanan, Andrew Johnson, and Franklin Pierce. Eland ranks Jimmy Carter better than Ronald Reagan, a move sure to elicit the ire of conservative readers, and even George Washington is criticized for his reckless (and unconstitutional) actions during the Whiskey Rebellion. Eland slaughters several sacred cows in the process, and his breezy writing and short chapters allow for a quick and punchy read. One must give him credit for simply venturing to take on establishment group think and for his determination to view the presidency through a different–and unfortunately controversial–prism.

Yet, while Eland’s tome is a worthwhile and refreshing departure from most presidential histories, the book suffers from some of the same problems as the “acceptable” studies. The good points of the books can at times be overshadowed by an ideologically driven form of presentism, so while Eland professes to define the presidency as ratified in the original Constitution, his critique of various administrations sounds more like a twenty-first century op-ed then a desire to understand the men and their times.

For example, Eland is critical of Zachary Taylor for doing nothing to “alleviate” the “shameful murder” of the American Indian tribes in California during the California Gold Rush, and he castigates Franklin Pierce for “stealing Indian land” and for his “slave based” foreign and domestic policies which he claims led to the “Civil War.” These are opinions best expressed in modern presentist textbooks authored by the deans of the historical establishment. Eric Foner could not have written a better description of the Pierce administration. He praises presidents for executive energy when in defense of “liberty” and criticizes them when they don’t, but fails to understand that these actions would have (and often did) violated their oath of office. Original restraint sometimes means doing nothing even if doing nothing is politically incorrect or out of step with modern libertarian ideology.