A large double-tap car bombing (vid) hit Idleb city in northwest Syria today. Some 20 to 30 people were killed and more wounded. Idleb governorate is controlled by the al-Qaeda aligned Hayat Tahrir al-Sham (HTS) but many other terrorist groups continue to exist within the area. All fight each other over the available resources.

In September the Astana agreement between Turkey, Russia and Iran was the basis of a ceasefire in Idleb governorate. Turkey was supposed to cleanse the area of HTS and other terrorist groups. It deployed soldiers to fortified observation posts around the region but did little else to fulfill the agreement.

Turkey is not only dragging its feet on Idleb but allows new foreign fighters to go there:

According to local sources in the province cited by Sputnik, around 1500 terrorists crossed the Turkish border into Idleb under the cover of the Turkish authorities supported by Turkish agents and directly supervised by the Turkish Gendarmerie (Jandarma) that is affiliated to the Turkish army.
…
The sources mentioned that the terrorists are of Western nationalities, in addition to others who hold nationalities of East Asian and Arab countries, who were transported towards Jisr al-Shughour area that is under the control of terrorists from China and Turkistan, while the other foreign terrorists were transported to camps of Jabhat al-Nusra and Hurras Eddin in the southern and southeastern countryside of Idleb.

It is likely that many of these new arrivals are ISIS terrorist who fled from east Syria to Turkey and were then routed towards Idleb. The terrorist in Idleb governorate continue to attack Syrian troops around them. They use up quite a lot of ammunition and must have supply lines from Turkey to sustain the fighting.

Another recent meeting in the Astana format with Russia, Iran and Turkey confirmed the basic agreement but did not achieve a common position on how to proceed.

At the recent security conference in Munich Russia’s Foreign Minister Sergej Lavrov also mentioned (vid @~15:00min) the situation in Idleb. He said that there would be common Russian and Turkish patrols in some areas of Idleb governorate but provided no details.

For now everyone waits for the U.S. to retreat from northeast Syria as Trump has ordered. Idleb will only be attacked when that proceeded.

The Islamic State as a territory holding entity is finished. It will continue to exist for some time as an underground terrorist movement in Syria and Iraq and as a brand that local groups elsewhere will use for their misdeeds.

Since the end of last week the last holdout of ISIS is down to a few thousand square meters. The U.S. is now again negotiating with the terrorists instead of finishing them off:

More than 300 Islamic State militants surrounded in a tiny area in eastern Syria are refusing to surrender to U.S.-backed Syrian forces and are trying to negotiate an exit, Syrian activists and a person close to the negotiations said Monday.
…
The DeirEzzor 24, an activist collective in eastern Syria, said several trucks loaded with food stuff entered IS-held areas in Baghouz in Deir el-Zour on Monday morning. The group also reported that ISIS released 10 SDF fighters Sunday without saying whether the supplies of the food stuff were in return for the release.DeirEzzor 24 said that the truce reached between ISIS and the SDF last week has been extended for five more days as of Sunday.

A French colonel who led an artillery group in the fight against ISIS criticized the U.S. way of fighting that war:

Colonel Francois-Regis Legrier, who has been in charge of directing French artillery supporting Kurdish-led groups in Syria since October, said the coalition’s focus had been on limiting its own risks and this had greatly increased the death toll among civilians and the levels of destruction.”Yes, the Battle of Hajin was won, at least on the ground but by refusing ground engagement, we unnecessarily prolonged the conflict and thus contributed to increasing the number of casualties in the population,” Mr Legrier wrote in an article in the National Defence Review.

“We have massively destroyed the infrastructure and given the population a disgusting image of what may be a Western-style liberation leaving behind the seeds of an imminent resurgence of a new adversary,” he said, in rare public criticism by a serving officer. 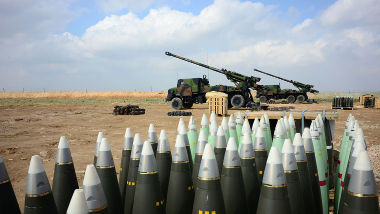 Note the mix of LU107 high explosive and LU214 white phosphorus grenades (Nexter catalog)
which together can be used to “shake ‘n bake” the enemy forces. The tactic is highly controversial.
bigger
Several times during the last months bad weather prevented the use of aerial bombing and artillery fire against ISIS. The terrorists always used these pauses to counterattack. The poorly armed and led Kurdish/Arab SDF suffered a lot of casualties because of these. The colonel opines that a well armed professional ground force would have shortened the conflict with less casualties and much less damage.

The original essay by the soon to be former colonel was taken down from the web. It is available in French on page 65 of this pdf.

It is still not clear if or when the U.S. forces will leave northeast Syria. President Trump had asked Turkey to take over the area but Syria, Russia, Iran and the Kurdish forces the U.S. used as proxies against ISIS are against this. A U.S. attempt to recruit British, German or French forces to occupy the area failed.

The Syrian ground must obviously be turned back to the Syrian government. The Kurdish forces, controlled by the anarcho-marxist PKK/YPG which Turkey and others designate as terrorists, use their current position to demand political autonomy in the area they now control. The Syrian government is strongly against this. Any federalization of Syria would be the beginning of its end.

Yesterday the Syrian President Bashar al-Assad offered a compromise to the Kurds. In a speech in front of the heads of local councils he announced local council elections and the decentralization of some political decisions. The required law 107 is already in place but its implementation was held up by the war:

[Assad] said that the essence of the local administration law is achieving balance in development across all areas by giving local administrative units the authority to develop their areas in terms of economy, urban development, culture, and services, thereby improving citizens’ living conditions by launching projects, providing job opportunities, and providing services locally, particularly in remote areas.President al-Assad said it is no longer practical to manage the affairs of the society and state and achieved balanced development in the same centralized way that had been used for decades, noting that the population of Syria in 1971 when the previous law was issued was around 7 million, while the population in 2011 when law 107 was issued had reached around 22 million.

That the implementation of elected local administrations is offered now is a clear sign to the Kurds that they can get some autonomy but not the wide ranging one that they ask for. While they can have local elections, councils and administrations as all other areas will have, there will be no separate armed force, police of judicative in Kurdish majority areas.

Several times over the war the Kurds overreached, made too large demands and lost because of it. Turkey took the Afrin area and the Kurdish population had to flee because the Kurdish leadership did not want the Syrian army to take over control. In a later part of the speech Assad again addressed the Kurds without specifically naming them. He warned:

“The Americans will not protect you… you will be a bargaining chip in their pocket along with the dollars they have, and they have already started bargaining. If you don’t prepare yourselves to defend your country, you will be mere slaves for the Ottomans. Only your state will protect you and only the Syrian Arab Army will defend you when you join it and fight under its banner.“When we stand in one position and in the same trench, face a single enemy, and aim in the same direction instead of aiming at each other, there will be no worry of any threat no matter how big, His Excellency said.

President al-Assad said the time has come for those groups to decide how history will judge them, and that they have a choice: to be masters in their own land, or slaves and pawns in the hand of occupiers.

The offer is quite clear and the consequences of not accepting it would be harsh. The Kurds and the area they hold must come back under Syrian government control or Turkey will grab it and will put the Kurds under its boots. The pigheadedness of their leadership could easily lead to that. In his speech Assad already predicts that they will reject his offer before – maybe – accepting it.

“As you noticed, I will not name these groups, but as usual, for a few hours or maybe for a few days, they will issue statements attacking this speech, then you will know who I’m talking about,” he added.

A few hours after Assad’s speech the Kurdish commander of the SDF was again begging the U.S. to keep 1,500 of its troops there.

Mazloum Kobani, commander-in-chief of the US-backed Syrian Democratic Forces (SDF), called on international coalition allies to keep 1,000-1,500 troops in Syria.
…
“We would like to have air cover, air support and a force on the ground to coordinate with us,” Kobani told reporters at an undisclosed airbase in northeast Syria, Reuters reports.

It is very unlikely that Trump will change his position. The U.S. troops will leave. Only the Syrian government can give the Kurds the protection they need.

How many more Kurds will have to die until their leadership finally accepts that?