The Global Financial System Is Unraveling, And No, the U.S. Is Not immune

Currencies don’t melt down randomly. This is only the first stage of a complete re-ordering of the global financial system.

Take a look at the Shanghai Stock Market (China) and tell me what you see: 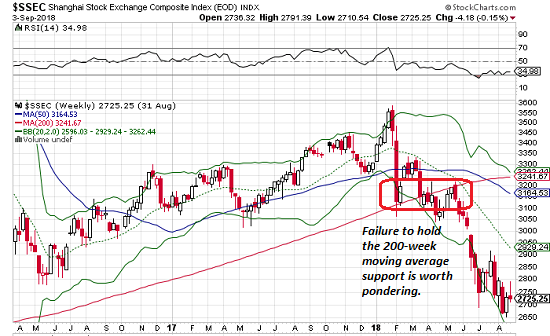 A complete meltdown, right? More specifically, a four-month battle to cling to the key technical support of the 200-week moving average (the red line). Once the support finally broke, the index crashed. 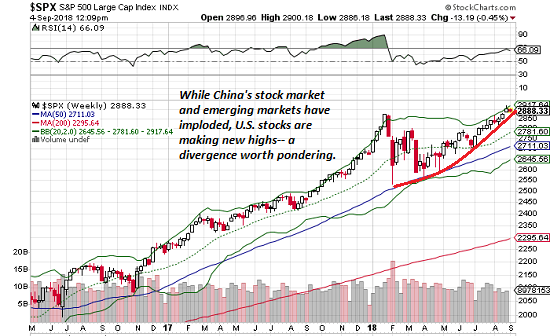 SPX is soaring to new highs, not just climbing a wall of worry but leaping over it. So the engine of global growth–China–is exhibiting signs of serious disorder, and the world’s consumerist paradise–the U.S.– is on a euphoric high (Ibogaine in the water supply?)

This divergence is worth pondering. How can the two economies that have powered a 28-year Bull Market in just about everything (setting aside that spot of bother in 2008-09) be responding so differently to the global economy and global financial system’s woes?

There’s a rule of thumb that’s also worth pondering. While the stock market attracts all the media attention–every news cast reports the daily closing the Dow Jones Industrial Average, the SPX and the Nasdaq stock index–the bond market is larger and more consequential. And larger still is the currency market–foreign exchange (FX).

As the chart below illustrates, a great many currencies around the world are in complete meltdown. This is not normal. Nations that over-borrow, over-spend and print too much of their currency to generate an illusion of solvency eventually experience a currency crisis as investors and traders lose faith in the currency as a store of value, i.e. the faith that it will have the same (or more) purchasing power in a month that it has today.

The fact that so many currencies are melting down at the same time is telling us the global financial system is unraveling, and unraveling fast. This is a symptom of a fatal disease. Currencies reflect all sorts of financial information; they’re akin to taking an economy’s pulse: trade balances, debt levels, interest rates, central bank policies, fiscal policies, and so on.

The global financial system is inter-connected, but this is not a viable excuse for the meltdown. The general explanation floating around is that currency weakness is like the flu: one currency gets it, and then it spreads to other weak currencies.

Fixing vs. BuyingNapoleon Was Defeated by Volcanoes