When you’re out in the wild, there’s always the risk of encountering dangerous animals. Whether it’s a omnivore like a bear, a carnivore like a wolf, or even an herbivore like a moose, wild animal encounters are always a potential threat on the homestead, wilderness bug-out, or even just a run of the mill hike or camping trip.

Thankfully, even predators generally want nothing to do with humans and would much rather avoid us altogether. However, if they are especially hungry, agitated, diseased, or have learned to associate humans with food, they are more likely to engage you. Sometimes, of course, we don’t know exactly why an animal became aggressive in any given case, so it’s important to learn the basics.

Even if you only take a single camping trip, you’ll want to keep at least a few basic items on hand in case of an encounter with an aggressive animal. We’ll outline these first: 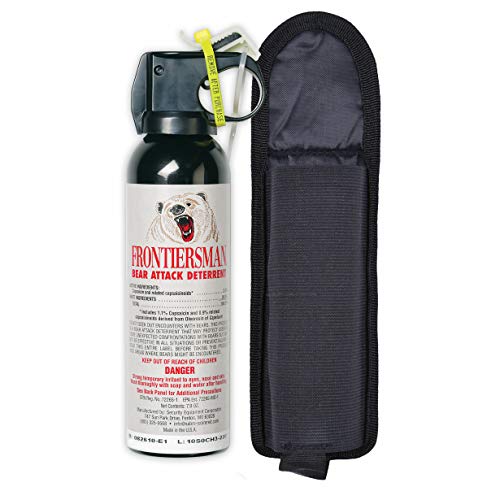 Bear spray is basically a highly concentrated, high-velocity form of pepper spray that can be fired further than pepper spray meant for humans. When a bear charges you, it may be the last thing keeping you from being tackled—or worse. It’s affordable and easy to clip onto your gear.

Here’s the Frontiersman Bear Spray with Chest or Belt Holster priced at $34.99.

This stuff is a potential life-saver, but is powerful and has definite drawbacks, making it not ideal for every situation. For example, it may backfire if you’re dealing with strong winds, there are trees for the spray to ricochet off of, or if you’re in close quarters like a tent.

Regardless of animals, every hiker and camper should have a good knife—and bring it with them on every trip. Hopefully you never have to use it to defend yourself against a bear or other animal, but with so many practical uses, a versatile knife should be one of the mainstays of every gear load-out.

Like a good knife, rain gear is another basic item that every hiker and camper should have from the get-go. The weather-related reasons are obvious , but when it comes to handling encounters with wild animals, a big rain poncho or jacket has an important use as well. We’ll get into this in more detail in the next section.

What to Do in an Animal Encounter

When an animal is becoming aggressive, it usually displays clear signs. These often include grunting, scratching, hair standing up, scratching the ground with antlers, and “bluff” charges where the animal begins to charge, but then stops short. However, animal may not necessarily show aggression right away. The first step if you see an animal out in the wild is to get it to notice you.

This may seem like the opposite of what you want, but the key is identifying yourself non-threateningly, and never startling the animal. This helps keep the animal calm and helps prevent you from being identified as prey. If an animal has already begun aggressive postures, it is already in an agitated state. When out in the wild you’re also much better off in a group, even a small one, than being alone. Being alone greatly increases the potential likelihood of being targeted for attack.

Obviously you want to make your presence known to the animal from a distance, but may not always have this liberty. If you have a surprise, close-distance encounter, you’re already at the stage where you may have to ready your bear spray and/or knife. Otherwise, follow these steps to get an animal to notice your presence and identify you as a non-threatening human rather than a prey animal:

SocialismKeep Your Hands Free and Your Pants Up