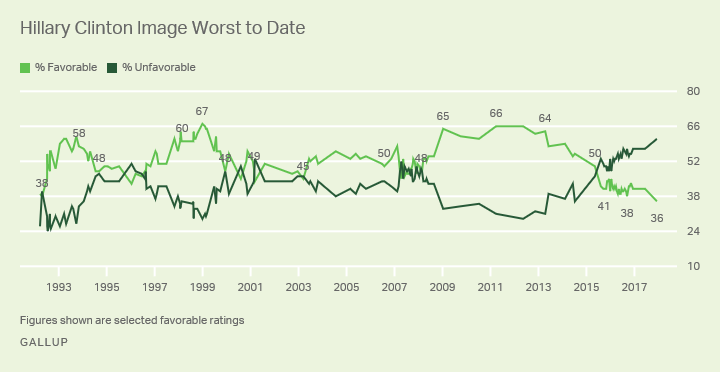 The current results are based on a Dec. 4-11 Gallup poll. Clinton’s favorable rating has varied significantly in the 25 years Gallup has measured opinions about her. Her personal best was a 67% favorable rating taken in a December 1998 poll just after the House of Representatives voted to impeach her husband, then President Bill Clinton. She also had favorable ratings in the mid-60s during her time as secretary of state between 2009 and 2013. 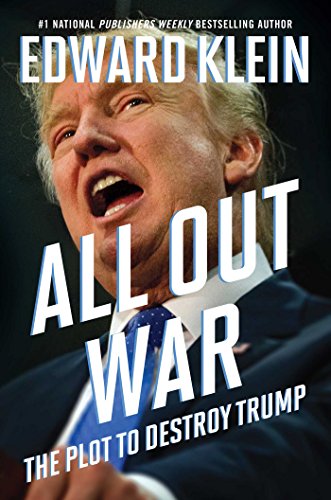 At times when she assumed a more overtly political role — during attempts to reform healthcare in 1994, in her years as a U.S. senator, and during her 2007-2008 and 2015-2016 campaigns for president, her ratings suffered. Her favorable ratings were near 50% when she announced her second bid for the presidency in the spring of 2015, but fell in the summer of 2015 amid controversy over her use of a private email server while she was secretary of state. Throughout 2016, her favorable ratings were generally around 40%, among the worst ever measured for presidential candidates but more positive than Donald Trump’s ratings.

Since losing to Trump, Clinton’s favorable ratings have not improved, in contrast to what has happened for other recent losing presidential candidates. In fact, her image has gotten worse in recent months as Democratic leaders, political observers and Clinton herself have attempted to explain how she lost an election that she was expected to win. Meanwhile, controversy continues to swirl around Clinton given continuing questions about the fairness of the 2016 Democratic nomination process and her dealings with Russia while secretary of state. There has also been renewed discussion of Bill and Hillary Clinton’s handling of past sexual harassment charges made against Bill Clinton in light of heightened public concern about workplace behavior.

Democrats’ Image of Hillary Clinton Stable in Past Six Months

In the past six months, Hillary Clinton’s image has declined among Republicans and independents but not among Democrats.

From a longer-term perspective, Hillary Clinton’s favorability among Democrats has not held at the level seen during the 2016 election. She had 87% favorable ratings among Democrats both at the beginning (based on a May 2015 poll) and end (based on a November 2016 poll) of her 2016 campaign for president.

The campaign and its aftermath took the greatest toll on independents’ views of Clinton. She began with a 51% favorable rating among this group, which fell to 33% in November 2016 and now sits at 27%.

Bill Clinton’s image has also slipped over the past year, with his current 45% favorable rating down five points since Gallup last measured Americans’ opinions of him in November 2016. Given his 52% unfavorable rating, more U.S. adults now have a negative than a positive opinion of the former president.

His current rating is his lowest since March 2001, when it hit 39% after his rocky exit from the White House that included a series of controversial pardons as well as the Clintons taking, but later returning, gifts intended for the White House. At that time, 59% of Americans had an unfavorable view of Bill Clinton, his highest in Gallup’s trend. He did have favorable ratings lower than 39%, but those were measured early in his 1992 presidential campaign when a substantial proportion of Americans were not familiar enough with Clinton to offer an opinion of him. 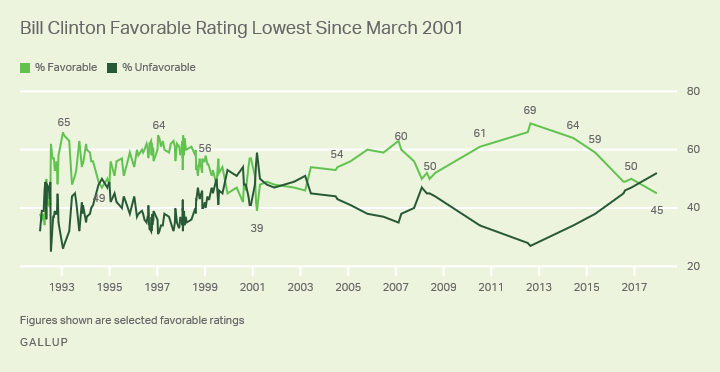 Bill Clinton’s image recovered in the years after he left the White House, as is typical for most ex-presidents. In August 2012, 69% of Americans had a favorable opinion of him, the highest Gallup has measured for him. His ratings began to fall after that, particularly after he began actively campaigning to support his wife’s presidential campaign.

In contrast to what has occurred for Hillary Clinton, Bill Clinton’s favorable rating is lower among his fellow Democrats than it was in Gallup’s prior measurement. Currently, 76% of Democrats have a positive opinion of him, down from 81% in 2016. Independents’ positivity has decreased even more — seven points — while Republicans’ views are steady.

Many political experts, and likely the Clintons themselves, thought Bill and Hillary Clinton would be residing in the White House in 2017. But Hillary Clinton’s surprise defeat in the 2016 election ended their careers as elected officials. The year away from politics has not caused Americans to view either in a more positive light; in fact, the opposite has occurred with Bill Clinton’s ratings the worst in 16 years and Hillary Clinton’s the worst Gallup has measured to date.

Rather than looking favorably upon their more than 25 years of public service, the past year has been filled with second guessing of the 2016 Clinton campaign strategy and continued allegations of unethical or illegal behavior on Hillary Clinton’s part during her time in public service and as a presidential candidate. In addition, the focus on sexual harassment this year has caused some, including Democrats, to question the way Bill Clinton’s supporters responded to past allegations that he mistreated women.

In the past, both Bill and Hillary Clinton’s ratings improved when they were in less overtly political roles — she as first lady and secretary of state, and he as a former president and philanthropic leader. For Bill Clinton, though, it took more than two years for his image to recover after his controversial exit from the White House in 2001. Thus, if their ratings are to improve, it may take more time for the political wounds from the 2016 campaign to heal.

Results for this Gallup poll are based on telephone interviews conducted Dec. 4-11, 2017, with a random sample of 1,049 adults, aged 18 and older, living in all 50 U.S. states and the District of Columbia. For results based on the total sample of national adults, the margin of sampling error is ±4 percentage points at the 95% confidence level. All reported margins of sampling error include computed design effects for weighting.