By Larry Kummer
Watts Up With That?

Summary: To boost our fear, activists and journalists report the weather with amnesia about the past. Ten-year records become astonishing events; weather catastrophes of 50 or 100 years ago are forgotten. It makes for good clickbait but cripples our ability to prepare for the inevitable. California’s history of floods and droughts gives a fine example — if we listen to the US Geological Survey’s reminder of past megafloods, and their warning of the coming ARkStorm.

” A 43-day storm that began in December 1861 put central and southern California underwater for up to six months, and it could happen again.”

— “California Megaflood: Lessons from a Forgotten Catastrophe” by B. Lynn Ingram (prof of Earth Science, Berkeley) in Scientific America, January 2013.

Lithograph of K Street in Sacramento, CA during the 1862 flood. From Wikimedia commons.

One of the key events in California history has disappeared from our minds. For a reminder see this by the US Geological Survey.

“Beginning on Christmas Eve, 1861, and continuing into early 1862, an extreme series of storms lasting 45 days struck California. The storms caused severe flooding, turning the Sacramento Valley into an inland sea, forcing the State Capital to be moved from Sacramento to San Francisco for a time, and requiring Governor Leland Stanford to take a rowboat to his inauguration. William Brewer, author of Up and Down California in 1860-1864

, wrote on January 19, 1862, ‘The great central valley of the state is under water — the Sacramento and San Joaquin valleys — a region 250 to 300 miles long and an average of at least twenty miles wide, or probably three to three and a half millions of acres!’ 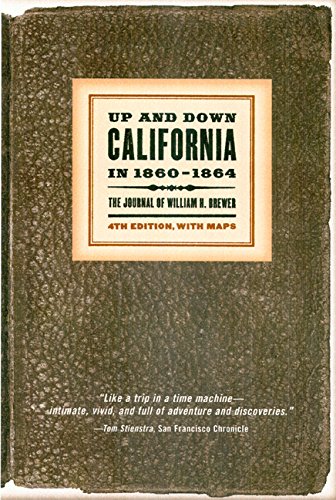 ‘In southern California lakes were formed in the Mojave Desert and the Los Angeles Basin. The Santa Ana River tripled its highest-ever estimated discharge, cutting arroyos into the southern California landscape and obliterating the ironically named Agua Mansa (Smooth Water), then the largest community between New Mexico and Los Angeles. The storms wiped out nearly a third of the taxable land in California, leaving the State bankrupt.

“The 1861-62 series of storms were probably the largest and longest California storms on record. However, geological evidence suggests that earlier, prehistoric floods were likely even bigger. There is no scientific evidence to suggest that such extreme storms could not happen again. However, despite the historical and prehistorical evidence for extreme winter storms on the West Coast, the potential for these extreme events has not attracted public concern, as have hurricanes. The storms of 1861-62 happened long before living memory, and the hazards associated with such extreme winter storms have not tested modern infrastructure nor the preparedness of the emergency management community.”

For an account of the flood from that time see this by J. M. Guinn; an excerpt from Exceptional Years: A History of California Floods and Drought (1890). Red emphasis added.

“The great flood of 1861-62 was the Noachain deluge of California floods. During the months of December 1861, and January, according to a record kept at San Francisco, 35 inches of rain fell, the fall for the season footed up nearly 50 inches {average is 24 inches/year}. As in Noah’s the windows of heaven were opened, and the waters prevailed exceedingly on the face of the earth.

“The valley of the Sacramento vast inland sea; the city of Sacramento was submerged and almost ruined. Relief boats on their errands of mercy, leaving the channels of the rivers, sailed over inundated ranches, past floating houses, wrecks of barns, through vast flotsams, made up of farm products farming implements, and the carcasses of horses, sheep, and cattle, drifting out to sea.

“…To the affrighted vaqueros, who had sought safety on the hills, it did seem as if the fountains of the great deep really been broken up, and that the freshet had filled the Pacific to overflowing. The Arroyo Seco, swollen to a mighty river, brought down from the mountains and canyons great rafts of drift-wood …{that} furnished fuel to poor people of the city for several years.

“It began raining on December 24, 1861, and continued for thirty days, with but two slight interruptions. The Star published the following local: ‘A Phenomenon – Tuesday last the sun made its appearance. The phenomenon lasted several minutes and was witnessed by a great number of persons.’

“…After the deluge, what? The drought. It began in the fall of 1862 and lasted to the winter of 1864-65. The rainfall for the season of 1862-63 did not exceed four inches, and In the fall of 1863, a few showers fell, but not enough to start the grass. No more fell until March. The cattle were of gaunt, skeleton-like forms, moved slowly of food. Here and there, singly or in small weak to move on, stood motionless with of starvation. It was a pitiful sight. …

“The loss of cattle was fearful. The plains were strewn with their carcasses. In marshy places …the ground was covered with their skeletons, and the traveler for years afterward was often startled by coming suddenly on a veritable Golgotha — a place of skulls — the long horns standing out in a defiant attitude, as if protecting the fleshless bones. …The great drought of 1863-64 put an end to cattle raising as the distinctive industry of Southern California.”

For a more detailed account see “California Megaflood: Lessons from a Forgotten Catastrophe” by B. Lynn Ingram (prof of Earth Science, Berkeley) in Scientific America, January 2013 (PDF here).  The risk of such megafloods remains today as shown in the video “Central Valley Flood Risk” by the California Department of Water Resources and the Corps of Engineers, July 2011.

JFK’s Murder The Longest Airline Flights in the World