No man can serve two masters: for either he will hate the one, and love the other; or else he will hold to the one, and despise the other. Ye cannot serve God and mammon. ~ Matthew 6:24

He is a captain in the U.S. Army. He is an ordained minister. He is a chaplain stationed at Joint Base Lewis-McChord near Tacoma, Washington. He is a veteran of both the Iraq and Afghanistan wars. He is a West Point graduate. He holds a degree in mechanical engineering. He also holds a Master of Divinity degree. He “served” over 10 years in Airborne and Ranger assignments. He made more than sixty-five parachute jumps into seven countries on four continents. He is “Army Smart.” But he is deluded. 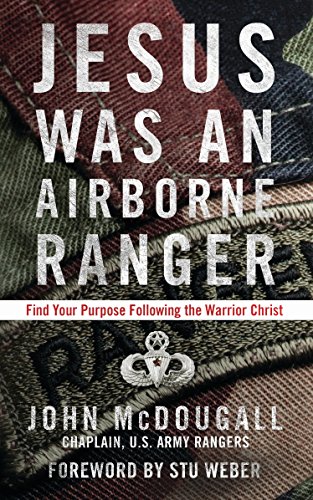 He is so deluded that he told Army Rangers at a recent 2nd Battalion, 75th Ranger Regiment award ceremony that  they were being used by God “to fulfill the mission on earth to rid the world of evil.”

He is so deluded that he told a reporter for NorthwestMilitary.com that Rangers “remove evil from the world” because they are “on God’s side.”

He is so deluded that he claims he was inspired to write Jesus Was an Airborne Ranger: Find Your Purpose Following the Warrior Christ (Multnomah Books, 2015) while returning from a training mission with the Army Rangers. He got the title of the book from what he says was “an old cadence” that “was sung in the Army for many years” that says in its first two verses, to the tune of “Do Lord”:

He then wrote the book while deployed in Afghanistan with a Ranger battalion.

He is so deluded that while deployed to Afghanistan for the fourth time he recently did an interview about the book with a deluded radio talk show host named Janet Parshall on her “In the Market” program. “Blessings to you, thank you, thank you, thank you for your service to our country,” began the deluded talk show host. “We appreciate your service more than we could possibly articulate.” At the end of the show, Parshall said that McDougall’s book was “wonderful,” before she again thanked him for his “service to the country.” “Blessings to you chaplain,” she gushed. “Thank you for all that you have done and are doing.”

He is so deluded that he told Parshall that while shaving one morning in Kirkuk, Iraq, in 2003, God told him: “I want you to be a soldier and a pastor. I want you to be an Army chaplain.” McDougall is saying that God wanted him to serve two masters.

McDougall says he wrote Jesus is an Airborne Ranger “to show a different kind of Jesus.” That sure is an understatement. He likes to refer to Jesus as “the Warrior Christ.” He says that “Jesus was a badass” who “calls us to vigorously advance his kingdom—as spiritual badasses—in our homes, communities, and world.” McDougall wants to help the reader find in Christ’s story “his own life-defining mission.” He uses “a military analogy throughout the book to accomplish that.” He puts “the picture of a Ranger” in front of the reader “as a helpful illustration of who Jesus was, how he lived his life, and what he calls his followers to do.” He thinks “the Ranger analogy can help us get a fresh view.” His imagery in a nutshell he gives as this: “An Airborne Ranger executes daring missions to rescue humanity at the cost of his own life. That’s exactly what Jesus does for us.”

experiences and something about Christ’s “mission” and how something done by Airborne Rangers relates to it. For example, in the chapter on the Incarnation, McDougall talks about how the U.S. Army Airborne forces originated during World War II and his experiences as a young second lieutenant at the U.S. Army Airborne School. Regarding Jesus and Airborne Rangers he writes: “Airborne Rangers infiltrate enemy-occupied territory by descending from the air and then heading straight to where they are needed. In a way, this is what Jesus did too. In Jesus, God did the unthinkable—he came to the earth and became one of us.”

There is just one problem with McDougall’s thesis: It is blasphemy to compare the Lord Jesus Christ to an Airborne Ranger. He did good, they do evil. He was holy, they act unholy. He was just, they commit unjust deeds. He was on mission from God, they are on a mission from the U.S. government.

Here is McDougall’s description of what Airborne Rangers do:

If U.S. soldiers need to enter a hostile area to secure key terrain, seize critical equipment, or neutralize a hostile enemy, then Rangers would likely be the first on the president’s list to call. Modern Rangers have demonstrated this capability during large-scale Airborne assaults in Grenada in 1983 and Panama in 1989. Furthermore, since the start of the global War on Terrorism in 2001, Rangers have conducted thousands of platoon-sized raids to capture hostile personnel or seize enemy equipment. Almost daily for more than a decade—in the mountains of Afghanistan and deserts of Iraq—these men-at-arms received their missions, donned their equipment, and complete their assignments under cover of darkness.

that are not enemies. Rangers unnecessarily make widows and orphans.

Please tell me how is it that Airborne Rangers are like Jesus Christ?

Previous article by Laurence M. Vance: Ye Shall Be as Gods