There came out of the woodwork after George W. Bush’s immoral, unjust, and unnecessary invasion, occupation, and destruction of Iraq certain groups of Christians—many of whom wear cross and flag lapel pins or American flag lapel pins in the shape of a cross.

With the advent of the book American Sniper: The Autobiography of the Most Lethal Sniper in U.S. Military History in 2012 and the movie American Sniper in 2014—both about Chris Kyle, “deadliest sniper in American history”—there has arisen another class of Christians that many in the previous groups have joined as well: sniper theologians. 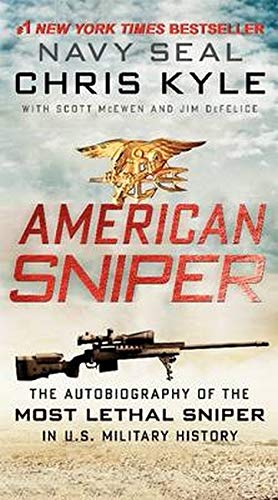 Typical is Richard Phillips, the “senior minister of Second Presbyterian Church in Greenville, S.C.,”  who, “prior to entering the ministry,” “commanded tank units as an officer in the U.S. Army and later served as an assistant professor of leadership at the U.S. Military Academy at West Point.”

“Rick” Phillips writes articles and blog posts for Reformation21, the online magazine of The Alliance of Confessing Evangelicals. One of his recent blog posts is “Should Christians Praise Snipers?”

Phillips “decided to go see the movie American Sniper because by all accounts it thoughtfully delves into the moral contours of warfare and killing.” By all accounts? I beg to differ.

But what really caught my eye was his “balanced biblical view” of snipers:

Given the popularity of the movie, the question is raised as to whether or not Christians should celebrate snipers. That is, should we approve not merely of faithful military service in general but also the brutal specialization of killing humans one deliberate and well-aimed shot at a time?  In short, my answer is Yes. In my view, a balanced biblical view calls us to praise snipers for their courageous and skillful service in defending us from evil.

Phillips then worked through his answer in five points:

Phillips thinks that soldiers are like Christ: “Military service against blood-thirsty enemies” is akin to “Jesus’ own violent actions in cleansing the temple from those who were exploiting the poor in Jerusalem.”

Phillips believes it is “quite in line with the Bible to believe that Jesus gives a positive verdict to faithful Christian snipers: ‘Well done, good and faithful servant.’”

Phillips maintains that since Jesus paid “his taxes to the wicked Roman government,” it is hard to see how he “would condemn an American citizen who faithfully answered his country’s valid call to military service.”

Phillips concludes that since “the day has not yet come when our swords and sniper rifles should be beaten into plowshares,” we should for now “gratefully praise the faithful soldiers who have defended us as snipers, and as tank crewmen, fighter pilots, and artillerymen.” But even that is not enough, for Phillips wants God to “send us many more snipers to defend us with courage and skill until Jesus finally comes and relieves of us the terrible burden of war.”

Since Phillips is not alone in his “balanced biblical view” of snipers, I thought I would list some of the characteristics of sniper theology in general rather than just focusing on his article.

Sniper theology glorifies long-distance murder, as long it is committed by American snipers.

Sniper theology considers it the duty of American snipers to kill whomever the current occupant of the White House says to kill.

Sniper theology pleads falsely that American snipers kill in self-defense even though they are the invaders and occupiers.

Sniper theology ignores what American snipers say about killing because they enjoy it.

Sniper theology considers the killing of women and children by American snipers to be necessary.

Sniper theology condemns as cowardly the killing of U.S. soldiers by snipers from other countries.

Sniper theology denies that American snipers who get killed reap what they sow.

Sniper theology feels that foreigners who resist U.S. invasions and occupations deserve to be killed by American snipers.

Sniper theology supposes that Jesus will tell American snipers: “Well done, thou good and faithful servant for dispatching another jihadist to the lake of fire.”

Sniper theology violates the First Commandment when it encourages the hero worship of American snipers.

Sniper theology accepts without reservation whomever the U.S. government designates as “the enemy.”

Sniper theology applauds movies about American snipers even though they are laced with gore and profanity.

Sniper theology deems it a great thing when Christian young people “surrender” to join the U.S. military to become a sniper.

Sniper theology thinks that American snipers who kill in U.S. wars of aggression are heroes instead of murderers.

Cursed be sniper theology. This unholy, anti-biblical heresy is pervasive in too many American churches. Stamp it out wherever and whenever you can.

Put Universities Out of Business A Criminal Year