My Encounter with the Connallys - 1992

At the 1992 version of ASK (The Assassination Symposium on John F. Kennedy), the final event of the weekend was to be ‘The Dealey Plaza Walk About’. That was to run from 2:00 until 4:00 p.m. and there were maybe ten of us ‘tour guides’ who would take groups of interested symposium attendees—as well as members of the general public who happened to find themselves there—on a tour of Dealey Plaza.

It was perhaps 3:45 p.m. and all the other tour guides were either back at the hotel, on their way back or wrapping up their last group when I glanced up towards Old Elm Street. That part of Elm that ran right in front of the Texas School Book Depository Building and led to the parking lot which is behind the picket fence atop the infamous ‘Grassy Knoll’.

A black Cadillac stretch limousine had pulled up and had parked. Getting out on the curbside was former Texas Governor John Connally wearing a white Stetson hat. Moments later, his wife Nellie

also appeared. They had been invited by the ASK organizers for the 2:00 p.m. ‘walk about’ but hadn’t shown up. I hustled up the hill towards the Governor and his wife, held out my hand and introduced myself.

The Governor apologized that his aide had written down the time of the ending of the event instead of the start and he wondered if it was too late. I explained that all the other guides as well as the organizers had already headed back to hotel but that I would be honoured to take them for a brief tour, until it got dark. While it was warm, and it was Texas, it was still the end of November and the thousands of birds that call Dealey Plaza home during the evenings were coming in to roost.

As we strolled slowly across Old Elm and then around the east end of the triangular block and began walking down the gentle slope of Elm Street, I could see that the Governor seemed a bit ill-at-ease.

“I guess,” I said, “That every time you come back to this place, the memories are not at all pleasant.”

“Actually,” replied John Connally, “This is the first time that we’ve been here since…since…that day.”

He hesitated and I could see that even 29 years later, the events of ‘that day’ were a part of John Connally’s daily life…and always would be.

“Nellie and I didn’t live here,” he said. “Austin is where the Governor’s mansion is and then there were the years in Washington. Sometimes I’d have to be here in Dallas for a dinner or an event, but I never allowed the car to come anywhere near here.”

Nellie Connally said, “Al, you don’t know how tough it was for me to get John to agree to come here today.”

She squeezed his arm and they looked at each other and I could see genuine affection that only a combination of years together and crises weathered can produce.

We continued down Elm Street until we were right below the concrete pedestal on which Abraham Zapruder and his secretary Marilyn Sitzman stood while filming the assassination. I pointed it out to the Connallys, pivoted and turned to face east, directly at the County Records Building. As I pointed up to the roof of that building, I said, “That is where the shooter was who shot you. The bullet entered your back and exited your chest.”

Now I turned to face north and looked up at the sixth floor of the Book Depository and said, “The top floor of windows is the seventh, so the next floor down is the sixth. Way over on the east end is where the Warren Commission said that Lee Oswald was…but we all know he wasn’t. However someone was in that window.

“The shooter who shot you a second time, was in the…”

“Yes sir,” I responded. “That shooter was on the same floor but in the far west window. While your wife was pulling you towards her, a bullet went through your right wrist and ended up in your left thigh.”

When I said this, I saw Nellie Connally elbow her husband in the ribs gently and say,”See, John, I told you that I felt something hit you when I was pulled you over. Now I have proof.”

“Mrs. Connally,” I said. “This isn’t proof, it’s just my take on who was where on that day. I looked at the wounds on both the Governor and the President as well as the spectator who was hit way down there by the underpass on Commerce Street. I just did what a ballistics person would do at any other shooting scene. Work backwards. Don’t let yourself be swayed by what other people have said happened. Work it out for yourself.”

“For years,” said Nellie Connally, “I have believed that John was struck by two shots, but he has insisted that he felt only one.”

I said, “I think that by the time the second shot hit, maybe two seconds after the first one, that the Governor was already in shock and that he wasn’t capable of feeling anything. He also would have had a loud rushing noise in his ears, so until he was down in your lap and the car was on its way to the hospital, he probably couldn’t hear anything either.”

The Governor was silent for a moment and then asked, “Al, how many shooters do you think were firing at us?”

John Connally chuckled a bit and said, “That’s what shoots you conspiracy buffs down in the press. You always over-reach. How could that many people keep a secret for almost thirty years?”

“Governor?” I asked, “Do you remember the armoured car robbery in Boston in the early fifties?”

“Imagine that you and I are just chatting about what we’ve done in our lives and I say that I was part of that armed robbery. Do you honestly think that anyone involved in that case would say anything to anyone even forty years after the fact?”

“Probably not,” the Governor said after thinking for a few moments.

“Well,” I said, “At the centre of this event, when you put aside all the theories, trajectories, reports, obfuscations, misdirections and even outright lies, there is one simple fact: a homicide occurred. John Kennedy was killed and the statute of limitations never runs out on murder. So why would anyone risk coming forward even thirty years later?”

The Governor said nothing but I could see him formulating a reply. “So how many people who were involved, know everything?” 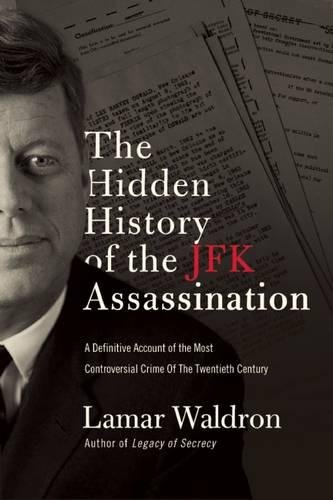 The three of us laughed at that and I felt that if I could get John and Nellie Connally to laugh at a place where one of them was shot and both of them scarred forever, then I did my job.

“How long have you been interested in the case?” Nellie Connally asked.

“Early on,” I replied. “I guess I really became interested when I saw Jack Ruby shoot Lee Oswald on live television from ABC Buffalo, while I watched from Toronto.”

“Toronto?” the Governor exclaimed. “You mean you are Canadian?”

“Then your early interest in the assassination is even more interesting,” said Nellie Connally.

“So,” said the Governor, “You said that you thought there were six people involved. Where were they?”

“I said that there were six people shooting at you,” I corrected, “And they were everywhere. My scenario has the first shot hitting the President in the throat fired from behind the picket fence. The second, third and fourth shots were almost simultaneous. One was the shot that hit you, fired from the roof of the Country Records Building. Another was from the so-called ‘Oswald window’ or

‘sniper’s nest’ which hit the President in the back. The third of these three shots was fired from the second floor window of the Dal-Tex Building, went through the limousine’s windshield and then hit the curbstone down by the triple underpass and Commerce Street. A fragment either of the bullet or the curbstone that it hit flew up and slightly wounded a spectator named James Tague. The next shot was the second shot that hit you in the wrist and ended up in your left thigh, fired from the west window on the sixth floor. The final shot is controversial. I believe that it was fired from this storm drain.”

By then I had slowly walked the Connallys down Elm Street until we were at the base of the stairs that led up the ‘grassy knoll’. I moved them gently to the curb, without stepping into traffic.

“In 1963,” I began, “This opening was a full eight inches high. Plenty of room for a person to fire a handgun and the shot was very close. When I first spoke to Bill and Gail Newman—who were just up Elm Street from here on that day—about eight years ago, I mentioned to Bill that I had heard a radio interview with him done on the afternoon of the assassination and that he had said the last shot ‘sounded different’. When I said this to him, I could see him replaying the assassination in his mind—as I’m sure that both you and Nellie, uh, sorry, Mrs. Connally…”

“I kinda liked being called ‘Governor’ again, dear,” said John Connally and smiled at his wife.

“Why so many people?” asked Nellie Connally.

“If each shooter fired only once, he didn’t need to re-acquire his target and re-aim. It was just pull the trigger and then get the hell outta here. I bet that the gunman who fired the first shot that hit you was already off the roof and down the stairs before the limousine went under the triple underpass. By the time anybody would have thought to look, the shooters were all long gone. Each one in a different direction. I also believe that they didn’t even know where the other shooting locations were either.”

During our little stroll a few people had recognized the Connallys and had come over, some asking for autographs, but most just watching from a distance.

In all, I spent perhaps thirty to forty minutes with the Connallys and when it was over and I walked them back to their limousine, John Connally shook my hand and said. “Son, you’ve given me a lot to think about today and I thank you for that.”

Nellie Connally also shook my hand and gently kissed my cheek. “Thank you, Al,” was all she whispered.

They got into the limousine which during our tour had turned around so the it was now heading east on Old Elm. As the limousine slowly pulled away I thought about my little brush with history. The first time the Connallys had been back in Dealey Plaza since the assassination. I wondered if any of my fellow researchers would believe me when I got back to the Hyatt Reunion Hotel, but some attendees had seen me with the Connallys and others had come up for autographs.

When I got back to the hotel, a few of the researchers had already heard that the Connallys had finally arrived and that I had been their tour guide and I got some good-natured ribbing. When I got back to Toronto a few days later, I roughly wrote down most of the conversation that we shared as best as I could remember it.

But it wasn’t until 14 years later, with the help of those notes, that I finally put together this little narrative.

Law by Consent, Not Compulsion.Gold as an Investment