Revisionism and the Historical Blackout

The First World War and American intervention therein marked an ominous turning point in the history of the United States and of the world. Those who can remember "the good old days" before 1914 inevitably look back to those times with a very definite and justifiable feeling of nostalgia. There was no income tax before 1913, and that levied in the early days after the amendment was adopted was little more than nominal. All kinds of taxes were relatively low. We had only a token national debt of around a billion dollars, which could have been paid off in a year without causing even a ripple in national finance. The total federal budget in 1913 was $724,512,000, just about 1 percent of the present astronomical budget. 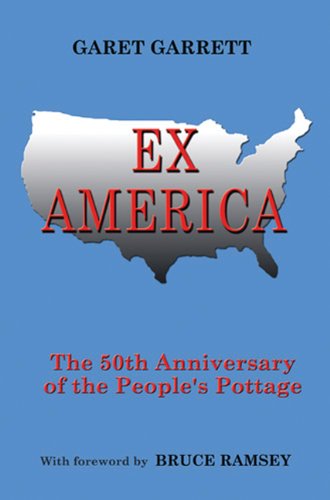 Ours was a libertarian country in which there was little or no witch-hunting and few of the symptoms and operations of the police state which have been developing here so drastically during the last decade. Not until our intervention in the First World War had there been sufficient invasions of individual liberties to call forth the formation of special groups and organizations to protect our civil rights. The Supreme Court could still be relied on to uphold the Constitution and safeguard the civil liberties of individual citizens.

Libertarianism was also dominant in Western Europe. The Liberal Party governed England from 1905 to 1914. France had risen above the reactionary coup of the Dreyfus affair, had separated church and state, and had seemingly established the Third Republic with reasonable permanence on a democratic and liberal basis. Even Hohenzollern Germany enjoyed the usual civil liberties, had strong constitutional restraints on executive tyranny, and had established a workable system of parliamentary government. Experts on the history of Austria-Hungary have recently been proclaiming that life in the Dual Monarchy after the turn of the century marked the happiest period in the experience of the peoples encompassed therein.

Enlightened citizens of the Western world were then filled with buoyant hope for a bright future for humanity. It was believed that the theory of progress had been thoroughly vindicated by historical events. Edward Bellamy’s Looking Backward, published in 1888, was the prophetic bible of that era. People were confident that the amazing developments in technology would soon produce abundance, security, and leisure for the multitude.

In this optimism in regard to the future no item was more evident and potent than the assumption that war was an outmoded nightmare. Not only did idealism and humanity repudiate war but Norman Angell and others were assuring us that war could not be justified, even on the basis of the most sordid material interest.

In our own country, the traditional American foreign policy of benign neutrality and the wise exhortations of George Washington, Thomas Jefferson, John Quincy Adams, and Henry Clay to avoid entangling alliances and to shun foreign quarrels were still accorded respect in the highest councils of state.

Unfortunately, there are relatively few persons today who can recall those happy times. In his devastatingly prophetic book, Nineteen Eighty-Four, George Orwell points out that one reason why it is possible for those in authority to maintain the barbarities of the police state is that nobody is able to recall the many blessings of the period which preceded that type of society.

A significant and illuminating report on this situation came to me recently in a letter from one of the most distinguished social scientists in the country, a resolute revisionist. He wrote,

I am devoting my seminar this quarter to the subject of American foreign policy since 1933. The effect upon a Roosevelt-bred generation is startling, indeed. Even able and mature students react to the elementary facts like children who have just been told that there is (or was) no Santa Claus.

While the First World War headed the United States and the world toward international disaster, the Second World War was an even more calamitous turning point in the history of mankind. It may, indeed, have brought us – and the whole world – into the terminal episode of human experience.

It certainly marked the transition from social optimism and technological rationalism into the Nineteen Eighty-Four pattern of life, in which aggressive international policies and war scares have become the guiding factor, not only in world affairs but also in the domestic, political, and economic strategy of every leading country of the world. The police state has emerged as the dominant political pattern of our times, and military state capitalism is engulfing both democracy and liberty in countries which have not succumbed to Communism.

The manner and extent to which American culture has been impaired and our well-being undermined by our entry into two world wars has been brilliantly and succinctly stated by Professor Mario A. Pei, of Columbia University, in an article on "The America We Lost" in the Saturday Evening Post, May 3, 1952, and has been developed more at length by Caret Garrett in his trenchant book, The People’s Pottage.

Perhaps, by the mid-century, all this is now water under the bridge and little can be done about it. But we can surely learn how we got into this unhappy condition of life and society – at least until the police-state system continues its current rapid development sufficiently to obliterate all that remains of integrity and accuracy in historical writing and political reporting.

The readjustment of historical writing to historical facts relative to the background and causes of the First World War – what is popularly known in the historical craft as "revisionism" – was the most important development in historiography during the decade of the 1920s. While those historians at all receptive to the facts admitted that revisionism readily won out in the conflict with the previously accepted wartime lore, many of the traditionalists in the profession remained true to the mythology of the war decade. In any event, the revisionist controversy was the outstanding intellectual adventure in the historical field in the 20th century down to Pearl Harbor.

Revisionism, when applied to the First World War, showed that the actual causes and merits of that conflict were very close to the reverse of the picture presented in the political propaganda and historical writings of the war decade. Revisionism would also produce similar results with respect to the Second World War if it were allowed to develop unimpeded. But a determined effort is being made to stifle or silence revelations which would establish the truth with regard to the causes and issues of the late world conflict.

While the wartime mythology endured for years after 1918, nevertheless leading editors and publishers soon began to crave contributions which set forth the facts with respect to the responsibility for the outbreak of war in 1914, our entry into the war, and the basic issues involved in this great conflict.

Sidney B. Fay began to publish his revolutionary articles on the background of the First World War in the American Historical Review in July, 1920. My own efforts along the same line began in the New Republic, the Nation, the New York Times Current History Magazine, and the Christian Century in 1924 and 1925. Without exception, the requests for my contributions came from the editors of these periodicals, and these requests were ardent and urgent. I had no difficulty whatever in securing the publication of my Genesis of the World War in 1926, and the publisher thereof subsequently brought forth a veritable library of illuminating revisionist literature.

By 1928, when Fay’s Origins of the World War was published, almost everyone except the die-hards and bitter-enders in the historical profession had come to accept revisionism, and even the general public had begun to think straight in the premises.

Harry Elmer Barnes (1889–1968) was a pioneer of historical revisionism, meaning the use of historical scholarship to challenge and refute the narratives of history promulgated by the state and the political class, or as Barnes himself termed it, “court history.” Long regarded as a progressive intellectual leader of the American Left, Barnes became associated with the Old Right for his opposition to the New Deal and to American entry into World War II. His work has had a profound influence on New Left historians such as William Appleman Williams and Gabriel Kolko, as well as on the historical writings of Murray Rothbard and other libertarians. See Murray Rothbard’s editorial in Left & Right, “Harry Elmer Barnes, RIP.” See Harry Elmer Barnes’s article archives.

Are Progressives Entirely Useless? Jefferson vs Lincoln: America Must Choose