Jefferson vs Lincoln: America Must Choose

Over the course of American history, there has been no greater conflict of visions than that between Thomas Jefferson’s voluntary republic, founded on the natural right of peaceful secession, and Abraham Lincoln’s permanent empire, founded on the violent denial of that same right.

That these two men somehow shared a common commitment to liberty is a lie so monstrous and so absurd that its pervasiveness in popular culture utterly defies logic.

After all, Jefferson stated unequivocally in the Declaration of Independence that, at any point, it may become

necessary for one people to dissolve the political bands which have connected them with another and to assume among the powers of the earth, the separate and equal station to which the Laws of Nature and of Nature’s God entitle them…

And, having done so, he said, it is the people’s right

to institute new Government, laying its foundation on such principles and organizing its powers in such form, as to them shall seem most likely to effect their Safety and Happiness.

Contrast that clear articulation of natural law with Abraham Lincoln’s first inaugural address, where he flatly rejected the notion that governments derive their just powers from the consent of the governed.

Instead, Lincoln claimed that, despite the clear wording of the Tenth Amendment,

no State upon its own mere motion can lawfully get out of the Union; [and] resolves and ordinances [such as the Declaration of Independence] to that effect are legally void…

Furthermore, Lincoln claimed the right of a king to collect his federal tribute, by violence if necessary. Without even bothering to pretend such authority existed in the Constitution, Lincoln offered (and eventually carried out) a thinly veiled threat that

beyond what may be necessary for [collecting taxes], there will be no invasion, no using of force against or among the people anywhere.

In the words of Tony Soprano, pay up and nobody gets hurt.

But perhaps, as some have said, Jefferson intended his Declaration merely as a political tool to justify American independence from Britain. He surely would never have acknowledged or defended an individual state’s right to secede from the very union he helped to found. Except that he did, in his own first inaugural.

Upon assuming the presidency in 1801, amidst severe political and sectional turmoil, Jefferson said

If there be any among us who wish to dissolve the Union or to change its republican form, let them stand undisturbed, as monuments of the safety with which error of opinion may be tolerated where reason is left free to combat it.

In light of these facts, no serious student of history or politics could believe that Jefferson and Lincoln possessed similar visions for America. Or that Jefferson would have condoned the violent subjugation of a single sovereign state (let alone 11 of them), or thought Lincoln’s disregard for the Constitution in any way legal or justified.

Rather, he would have known at once that what Lincoln spawned through his belligerence was a government capable of violating its own fundamental law at will; of using illegal force to prevent the governed from withdrawing voluntary consent (regardless of their motivation), and thereby destroying consent altogether.

Such a government is incapable of liberty, and antithetical to the very existence of Jefferson’s America.

For that reason, it is not possible to truly understand, and yet still admire, the words and deeds of both men. Despite his occasional use of the Declaration’s language, Lincoln himself despised Jefferson; demonstrating by his policies that they occupied polar opposite ends of the ideological spectrum, as do their political descendants today. 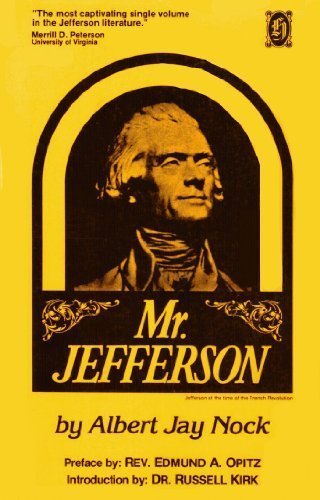 But, after decades spent trying to ignore or deny the irreconcilable disconnect between these two figures, the political class has succeeded only in perpetuating the contradictory and inherently dishonest character of modern American government. Though our system is ostensibly rooted in the rule of law and the ideals of liberty, its current nature is really embodied much more accurately by the lawless despotism of our 16th president.

We cannot continue to have it both ways. The preposterous dichotomy between America’s founding principles and the actions of her government, from the War Between the States to the War on Drugs, has predictably eroded that government’s moral standing at home, and its credibility around the world.

As a society, we cannot both revere a man whose fierce dedication to the right of political self-determination formed the philosophical foundations of our republic, and at the same time worship a dictator whose arrogant and bloody denial of that right transformed our republic into an empire.

It is time to choose. If Americans truly are heirs to the Jeffersonian legacy, than it has always been and must always be, not only our right, but our duty as citizens to withdraw consent from any government that becomes destructive of life, liberty, or the pursuit of happiness.

If, however, We the People believe ourselves incompetent to judge when that line has been crossed, then we will continue to find no shortage of political masters eager to carry on Lincoln’s legacy of contempt for our Constitution, and violent suppression of self-government.

Either way, one thing is certain: America will never regain the principles of her founding until her people muster the courage and clarity to finally separate liberty’s friends from its foes.

This is reprinted from the Tenth Amendment Center website.

Josh Eboch is a proud “tenther,” freelance writer, and activist originally from the Washington, D.C. area. He is the State Chapter Coordinator for the Virginia Tenth Amendment Center.

The Best of Josh Eboch