Seven Reasons to Invest in China I'm with Jim Rogers on This One...

By Jim Rogers and Christian A. DeHaemer

Recently by Jim Rogers: Dow 1 Million? Sure, Why Not?

I’ve been reading a lot of nonsense lately making the case for a China bubble. The reports saying that the 10.7% GDP growth cannot continue, and that the property market is overvalued and set to pop when the government cracks down on lending…

Poppycock, I say. I’d like to point out that Xie is best-known for calling 10 of the last three bubbles… meaning he calls a lot of bubbles, and occasionally one actually happens.

The truth is that the generals are fighting the last war. Just because the U.S. economic decline was based on a real estate collapse does not mean that China’s economy will do the same. There are very real differences.

Seven Reasons to be Bullish on China

For one, China is being driven by cash — not credit. (You may remember this thing called "cash" from back in the day…)

If you count public and private sources, China has 5% to 6% of global GDP in cash; if you count the broadest measures, China has almost three trillion dollars in foreign reserves. And the economy and tax revenues are growing — not shrinking — as they are in other parts of the world.

The first time I met Jim Rogers — the guy who wrote the quintessential Investment Biker — I was at a small speaking engagement in New York that took place at one of those English-sounding hotels along Central Park. I’m sure he has no recollection of me.

Jim had just gotten back from a trip around the world with his very young wife. The two of them had driven a yellow, custom-made, 4WD Mercedes over every continent… while pulling a trailer, no less. He wrote about that trip in the book Adventure Capitalist.

Mr. Rogers said a lot of things at that event, but one thing stuck with me. When asked about the housing bubble (this was back in 2006 or so), he said to short the investment banks. When asked which ones, his reply was, "all of them." 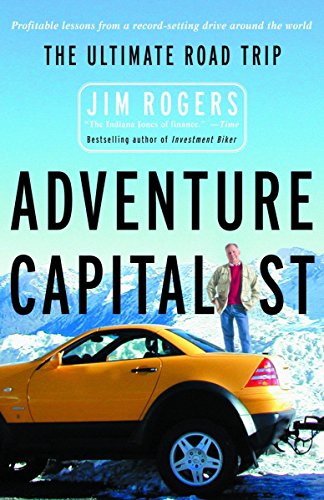 He was absolutely right.

Right now, Rogers is saying that China’s economy is not in a bubble. But he says there are certain areas where real estate is overvalued. Bloomberg quoted him as saying, "property prices should decline in Hong Kong and Singapore. But China’s economy as a whole isn’t in bubble territory."

3. China will soon have the largest transportation network.

When I was a schoolboy in the 1970s, every civic class I took touted the Eisenhower highway system as being one of the greatest growth engines ever produced. The textbooks claimed that because the United States had more highways — of superior condition — than any other country, goods could flow from coast to coast with ease.

I don’t know if they still teach this, but I do know that the U.S.’s lead on its road network is about to end.

China just spent $586 billion (plus additional trillions in loans) on a stimulus package. And a lot of this money is going towards highways, railroads, and airports.

According to the Malaysian Insider, "[China’s] infrastructure spending had been increasing by an average of 20% annually for the past 30 years — a tried and true engine that has helped power the Chinese economy’s explosive growth."

There was a time when Americans could build an airport on a volcanic island in three days. Now we spend 10 years bickering over the rebuilding of the World Trade Center. I’ve yet to hear a date on the grand opening…

4. China is now the number one auto market.

Naturally, if you build roads… people want to drive on them.

In 2009, a total of 10.3 million passenger cars were sold in China — up 52.9 percent from just a year earlier. Domestically-branded cars accounted for 30 percent of this total.

Nick Hodge of Alternative Energy Speculator says, "The Chinese auto industry is growing in an exponential fashion. And it’s not all old fashion gas engines. There are 50,000 taxi cabs in Shanghai that run on natural gas. But the fastest growing company makes a battery-powered car. The stock is up 400% already, and it’s going to quadruple again."

The Dead Hand of Foreign Aid Did King George III Deserve To Be Overthrown?