The Dead Hand of Foreign Aid

Dambisa Moyo has a Bachelors degree in Chemistry and an MBA in Finance from the American University in Washington D.C., a Master of Public Administration in International Development from Harvard University’s Kennedy School of Government, and a PhD in Economics from Oxford University. She worked at the World Bank, then at Goldman Sachs for eight years.

All this training and experience has led her to the conclusion that foreign aid is killing Africa. Her book, Dead Aid, proposes that government-to-government aid to Africa should simply be eliminated entirely.

As she points out, real per capita income, lifespan, and other measures have actually fallen in Africa while the continent has absorbed over a trillion dollars in "aid." Between 1970 and 1998, poverty in Africa rose from 11 percent to 66 percent. (The developed world suffered too; imagine if that trillion dollars had been left in the private sector to be invested!)

Aid to governments builds up governments, not economies. Most African governments stay in power by deliberately wrecking their own nation’s economy, leaving the faction in control of the aid flow as the only source of wealth (or even sustenance).

There are exceptions, success stories which are rarely reported. Botswana has grown faster than most developed economies since it adopted relatively free-market policies in the 1960s. Botswana now has a per capita income comparable to a typical Latin American country, ten times the pathetic levels in most of the rest of Africa. Of course this growth has been due to trade, not aid.

Since the 1990s, another positive trend has been African trade with China and the rest of Asia. Afro-Asian trade has grown at 30% per year. China is now Africa’s third-largest trading partner. Moyo also praises the Chinese government’s aid programs… they have a record of actually building railroads and roads to facilitate trade, not just buying weapons and Swiss bank accounts for the dictators.

The rest of the world has not been so helpful to Africa’s poor farmers. While spending massive amounts to build up Africa’s dictators, US and European tariffs have practically blockaded Africa. The barriers to agricultural trade are estimated to have cost Africans hundreds of billions in trade per year. (Of course tariffs cost the developed countries’ economies as well, something the author does not point out.)

A figure quoted in many recent books on aid policy is that European agricultural subsidies give each European cow over two dollars a day… twice what the average African lives on.

The World Bank is actually pretty good at reporting on the disastrous effects of Aid To Dependent Dictators. The conclusion of their economists is that "aid only works when there is a good institutional structure." Ms. Moyo’s comment is that if a nation has a "good institutional structure" then it doesn’t need aid. The government can borrow for infrastructure projects on the world capital markets, and private investors can supply the private economy with all the capital it can use. 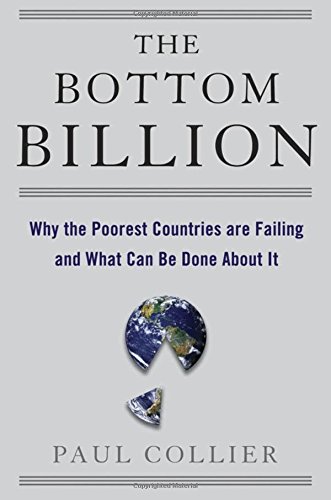 Paul Collier is the Director of the Center for the Study of African Economies at Oxford. He sounds more supportive of aid in The Bottom Billion… at first. But as the book progresses, he agrees with the World Bank and Dambisa Moyo that aid only works in countries that already have a good institutional structure. He claims to have calculated that 40% of the military expenditures in Africa are paid for by foreign aid. Both he and Moyo agree that aid causes coups and civil wars, as factions fight over the aid spoils. And when a faction succeeds in capturing the aid flow, it can then exterminate its ethnic rivals. Foreign money and military technology can be an insuperable advantage in a genocidal war, as in Darfur, Nigeria, Angola, and so many other examples over the last five decades.

Foreign Aid Should Be a Primary Conservative Issue

So even aid academics and World Bank employees are calling for an end to Aid To Dependent Dictators, coupled with a drive for worldwide free trade. What has been the Obama Administration’s response? To double the US aid budget from the Bush era, to $48.764 billion. (Official US foreign aid in 2006 had totaled less than $23 billion.) Of course, all of this money is borrowed from the Chinese and other foreign taxpayers, as the US is broke. And this doesn’t count the surge in military expenditures for Afghanistan, Pakistan, Yemen, or three draft picks to be named later.

We are burdening our children with debt beyond endurance in order to maintain kleptocracies around the world. We are heading into the worst Depression in US history while keeping up economy-destroying tariff barriers and agricultural subsidies just as FDR did in the 1930s. Isn’t it about time this became a major issue?