'Race To The Top' Is Fixed: Just Say No!

When the federal government decides it’s too risky to usurp the powers reserved to the states respectively, or to the people with outright force or fraud, it often employs a softer approach involving bribery. It should surprise no one that the Department of Education (DOE), under President Obama, is at it again.

The Obama administration’s “Race To The Top” (RTTT) stimulus grant program should really be called the “Race to Nationalize Education.” Like the Bush administration’s “No Child Left Behind” program, it is nothing but another measure designed to enable the central government to take over control of our local schools and establish a government of occupation in the territory that exists between our children’s ears.

According to a DOE press release, the “centerpiece of the Obama administration’s education reform efforts,” in its “$4.35 billion RTTT program, “..will include adopting internationally benchmarked education standards.”

The question immediately arises, “What are internationally benchmarked standards?” The word “international” often sends shivers down the spine of many conservatives who understandably worry about the loss of American sovereignty. 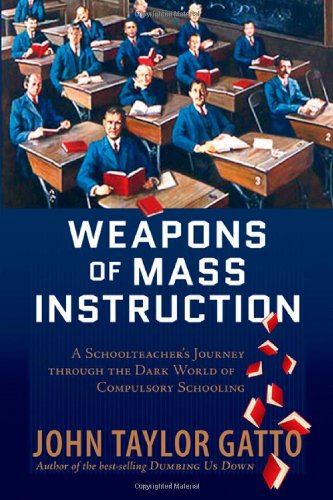 It turns out that the former Governor of my state, Janet Napolitano, now turned Homeland Security overlord, was one of the Co-Chairs of the International Benchmarking Advisory Group. However, I must admit that after reading, “Benchmarking for Success: Ensuring U.S. Students Receive a World-Class Education,” which was a 2005 joint report published by the International Benchmarking Advisory Group, my level of concern was actually reduced from what it was initially.

Besides having a lot of nice pictures of children holding globes and smiling at the spherical representation of the earth, there was a lot of bad news about how far American kid’s lag behind those of other developed countries in math, science, reading and problem solving. But the report didn’t state that we needed to teach more about global warming, population control, world government, or the United Nations. In fact it seemed like a very reasonable appeal for states in the U.S. to adopt basic educational standards that would match those of other developed countries.

What all people should all recognize, however, is the failure of large-scale central planning when it comes to meeting our economic needs or our educational needs. In fact, if there was one thing that caught my attention when looking at the countries in the report that consistently outranked the U.S. in academic performance, it was the fact that nearly all of them were small, both geographically and in terms of population. Canada was the most notable exception in terms of geography, but as of 2009, it had under 34 million people compared to over 308 million that live in the U.S. today.

So what does this point to in terms of human scale as it relates to academic excellence? With the sole exception of Canada, the world’s best performing students have their schools run by people who live closer to and are probably more accountable to their parents. The difficult and controversial decisions, such as what kind of education our children should receive, how many hours per day and how many days per year our children should attend school are best made close to home.

Lots of people in their own areas have met their Superintendent of Public Instruction. Few have met Obama’s Education Czar.

The result of accepting RTTT funds is described by Prof. Allen Quist, Professor of Political Science at Bethany Lutheran College. He writes, “This [RTTT program] will create a de facto federal curriculum. The Department of Education will financially reward those states that teach what DOE wants [to be] taught.”

Although it shouldn’t come as any great surprise, Arizona Governor Brewer chose to go after the carrot on a stick placed in front of her by our central planners in Washington. In fact, she and Dr. Duvall, Mesa School District Superintendent and Special Advisor to the Governor, wasted no time in creating a plan to apply for and comply with the terms of the RTTT grant.

According to the Arizona Education Network, “In order to apply for a Race to the Top grant, local education agencies (LEA’s) – public school districts and charter schools–have to fill out a participation agreement outlining specific actions to be taken under the four reform areas, as well as a memorandum of understanding. Arizona plans on meeting the January 15, 2010 federal deadline for funding. The winning states will be announced in April and if Arizona is chosen, school districts and charter schools would have to submit a written plan within 90 days. Implementation would take place in August/September 2010. If Arizona is not chosen in the first round, the state can reapply in June, 2010.”

The Best of Derek Sheriff

How to Disappear The Return of the Neocons