The Return of the Neocons

For all his eminence – or maybe because of it – the funeral for Irving Kristol this past September was an understated affair. Some thought Dick Cheney might show up, but neither he nor any other Republican leader did; it seemed almost ungrateful, given Kristol’s extraordinary contribution to the GOP – how he’d brought intellectual legitimacy and heft to what he himself had once called “the stupid party.” None of the Republican congressional leadership was there, nor any of the would-be candidates for 2012 – not even Sarah Palin, whom Kristol’s ubiquitous son, Bill, had helped turn into a political phenomenon.

The assemblage of about 200 people wasn’t exactly small, but in the gargantuan sanctuary of Adas Israel Congregation, built at a time – 1951 – when American Jews of Irving Kristol’s generation wanted to proclaim they’d finally arrived and planned to stick around awhile, it was dwarfed by its surroundings; the burgundy back benches were empty. Adas Israel is Washington’s most powerful Conservative congregation, the one to which every Israeli ambassador to the United States in history has belonged. Instead of the usual parade of celebrity eulogists, though, only two people – the rabbi and Bill Kristol – spoke, and briefly at that. In 40 minutes or so it was over.

But the strength of neoconservatism, the intellectual and political “persuasion” (as he once called it) that Irving Kristol launched and led, has never been in its numbers but in its firepower and ferocity. And had the elder Kristol – whose shrouded coffin sat inconspicuously below the stage, nestled between the American and Israeli flags – been able to survey the crowd, he’d have been pleased. For filling the pews were his progeny, not just biological but intellectual, and they were an impressive lot.

They came from the publications that neoconservatives either run, like Bill Kristol’s Weekly Standard, or work for, like The Washington Post and The Wall Street Journal. Others came from the think tanks where neocons congregate, particularly the American Enterprise Institute (AEI). There were faces from the Iraq War, with which the neocons are inextricably linked, like former deputy secretary of defense Paul Wolfowitz (making a rare public appearance) and the former civilian administrator of Iraq, Paul Bremer. Charles Krauthammer, the impassioned and highly influential neoconservative columnist at The Washington Post, and the political scientist Francis Fukuyama (a rare lapsed and repentant neocon) hadn’t spoken to each other for several years – ever since Fukuyama had taken exception to the roseate view of the Iraq War Krauthammer had offered in the American Enterprise Institute’s 2004 Irving Kristol Lecture – but Kristol’s death had briefly brought them back together, albeit in different parts of the synagogue. The more traditional wing of the Republican Party, the one the neocons had arguably routed, also paid homage: George Will, who’d come to view the Iraq War as an enormous mistake, took his seat respectfully. In his uncharacteristically apolitical, even gentle, eulogy, Bill Kristol couldn’t help but gloat over the proliferation of neocons: “scores, legions – hordes they must seem to those who disapprove of them,” he said.

Like Bill Kristol, some of those on hand had inherited their right-wing beliefs rather than adopted them (as Irving Kristol, a longtime Democrat, once had). Technically, there is nothing “neo” about conservatives like Robert Kagan, the historian and another Washington Post columnist, or John Podhoretz, the editor of Commentary; each is a son of one of neoconservatism’s founding fathers. Indeed, no strain in American politics is so dynastic. It is akin to the right-wing Likud Party in Israel, whose religion and politics, world view, and succession rituals the neocons often share. The definitions, and analogy, are inexact, but both groups have recent ties to Europe and are haunted by the Holocaust, which has left them feeling wounded, suspicious, and sometimes bellicose, determined never again to be naive or to trust the world’s good intentions. Both spent decades in the political wilderness before miraculously acquiring power; both begat “princes” who defied the normal generational tensions and allied themselves with their kingly fathers. When Bill Kristol rose to praise Irving that morning, he was really picking up his scepter.

Had you Googled “neoconservative” and “death” that day, four days after the 89-year-old Kristol expired, you’d have found lots on their long-rumored – and for some, much-anticipated and savored – demise. On both the left and right, neoconservatism was deemed a spent force. Its ideas, Foreign Policy magazine had pronounced, “lie buried in the sands of Iraq.”

But obituaries can be premature. At the moment, in fact, the neocons seem resurrected. One of their own, Frederick Kagan of AEI (Robert’s younger brother), helped turn around the war in Iraq by devising and pushing for the surge there. More recently, President Obama – whose foreign – policy pronouncements (nuanced, multi-lateral, interdependent) and style (low-key, self-critical, conciliatory, collegial) were a repudiation of neoconservative assertiveness – has swung their way, or so they believe. First, he’s sending an additional 30,000 troops to Afghanistan, nearly as many as leading neocons had sought. Then came his Nobel Prize acceptance speech, which, with its acknowledgment of the need for force, its nod to dissidents in Iran and elsewhere, and its talk about good and evil, was surprisingly congenial. 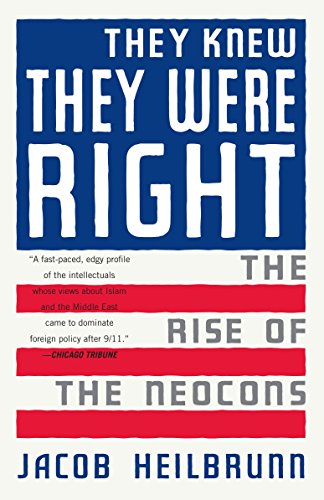 As if on cue, a Nigerian man with explosives in his crotch nearly brought down an American airliner over Detroit on Christmas Day, leaving the neocons feeling further vindicated and energized. Obama, who’d ratcheted up his rhetoric after an initial response that Bill Kristol and other neocons considered too tepid, had been “mugged by reality,” Kristol declared. It was an obvious homage to his father, who’d long ago defined “neocon” as a liberal to whom just that had happened. “Whether they praise or denounce Obama, the neocons are winning,” says Jacob Heilbrunn, a senior editor at The National Interest and author of They Knew They Were Right: The Rise of the Neocons (2008). “They’ve got him embracing the surge in Afghanistan and on the run for being ‘soft on terrorists.’ Either way, he ends up catering to them.” With Obama further weakened by an electoral repudiation in Massachusetts, that process might only intensify.

Such persistence is not surprising. For, as historians note, the impulses the neocons represent – the Manichaean world view, the missionary zeal, the near-jingoistic view of America, the can-do spirit and impatience with nuance – are as old as the country itself, dating back to John Winthrop and running through Abraham Lincoln, Woodrow Wilson, and John F. Kennedy. Yes, their brand has been tainted, and they may now need to call themselves something else. (Some of the most prominent among them, like Wolfowitz and Richard Perle, have always rejected the designation.) But the one issue on which they and their harshest critics (who, it must be said, seem obsessively, even morbidly, fixated on them) agree is that they are not about to go away.

All those would-be obituaries recalled the life story of the movement: its origins in the alcoves of the cafeteria at City College of New York in the late 1930s, when young Jewish intellectuals split hairs over their various versions of Trotskyism; how, as fascism threatened the free world, they’d become New Deal Democrats; and how, as they grew disillusioned with Great Society policies on welfare and race in the 1960s, they moved rightward. Of them all, Irving Kristol was the one who kept on going, eventually reaching Reaganism. Around the same time, prodded largely by another neoconservative titan, Norman Podhoretz of Commentary, the movement came to concentrate largely on foreign affairs, opposing dtente with the Soviet Union, championing Israel, targeting Arab despots and Islamic terrorists – taking on internationally, as George Will has noted, the very aggressive brand of interventionism it had disparaged domestically.

In this last iteration, neoconservatism touted “American exceptionalism”: the idea – actually more liberal than classically conservative – that the United States occupies a higher moral plane than any other nation, and should act accordingly. It disdained what it deemed the amoral, cynical realpolitik of Richard Nixon and Henry Kissinger, and promoted a muscular, aggressive foreign policy, anticipating and preempt-ing problems worldwide (by military means if necessary), unencumbered by corrupt or pusillanimous international organizations like the United Nations. “Delivering democracy out of the back of a Humvee” is how Stefan Halper – a former Reagan administration State Department official and senior adviser to George H.W. Bush who now teaches at Cambridge – disdainfully defined it.

'Race To The Top' Is Fixed: Just Say No!English Instruction: Where? When? Who Says?