Yes, the Kleins Were Fined for Not Baking a Cake 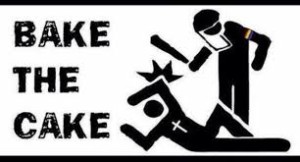 Josef Stalin’s Soviet Union was described as a society in which yesterday’s weather could be changed by decree. Collectivist spin-doctors have gone full-Stalinist in revising the story of Aaron and Melissa Klein, the Oregon couple who lost their wedding cake business — and stand to lose their home — because of a vindictive discrimination complaint filed by a same-sex couple who actually found a less expensive vendor because the Christian couple declined their business.

That claim is directly refuted by the text of the Final Order itself, which made it explicit and undeniable that the Kleins were being punished solely because of their refusal to provide the “service” sought by the same-sex couple (see page 41, lines 8-10):

“In this case, the ALJ [Administrative Law Judge] proposed that $75,000 and $60,000 are appropriate awards to compensate Complainants RBS and LBS, respectively, for the emotional suffering they experienced from Respondents’ denial of service.” (Emphasis added.) The same bloated and melodramatic document connects the various symptoms of “emotional suffering” directly to the discrimination claim and the resulting publicity — but no honest or rational person can deny that the latter was directly caused by the former.

Raw Story points out that a few hours after Aaron Klein exercised his property rights by declining the couple’s business, Laurel Bowman-Cryer “filed her complaint [with the Oregon Department of Justice] by smartphone, which prevented her from seeing a disclaimer notifying her that her full name and address would be sent to the bakery owners — and Aaron Klein shared that information, along with the complaint, on his personal Facebook page.”

That complaint was a public document, and the information contained therein was not privileged in any way. Klein and his wife, who had done no injury to the couple, faced a lengthy, costly, and potentially ruinous legal battle with the Oregon state government. The Kleins had every legal and moral right to publicize what was being done to them, and to enlist whatever help and support they could find. The aggrieved couple claims that they were vilified and threatened, which — if true — would be inexcusable. The Kleins suffered exactly the same treatment, in addition to losing their business and being targeted for official persecution by a totalitarian-minded bureaucrat collaborating with a collectivist pressure group.

Such considerations matter not at all to those who embrace Lenin’s dictum that the only significant question is “who does what to whom.” As officially designated “victims,” the couple who filed the complaint are entitled to everything the State can provide to them; as officially designated “bigots,” the Kleins supposedly deserve everything the State can inflict on them.