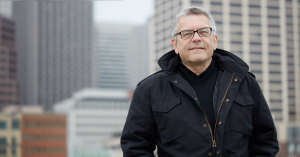 It is with great personal sadness and a profound realization of the intellectual loss to the cause of liberty that I announce the death of our dear friend Robert Wenzel, publisher of the Economic Policy Journal and Target Liberty. Robert Wenzel’s two outlets, for the many in the know, were among the first websites to visit each and every morning. His Target Liberty was as eclectic and iconoclastic (when it comes to the statist status quo) as it was didactic and, yes, even entertaining. Every day, readers were left with a challenging mental lesson and also a great chuckle. Shaking our heads with Bob at the absurdities of the new “woke” movement.

Bob was as great at pointing out the comical absurdities of post-modern life as he was at explaining complex economic concepts. He was a rarity in that he was a serious intellectual but he was also always able to see the comical and absurd nature of our current times. He was a brave man, often writing about challenging people on the streets of his native San Francisco on their wearing of masks and other things he found absurd in our steady descent into authoritarianism. He would very often share some of the tricks and turns of phrase he would use on people under the spell of the state.

He was a thinker, to be sure, but he also was a doer!

I had the sad task this evening of informing Dr. Paul (and Lew Rockwell) of Bob’s passing, which Bob’s close friend Chris Rossini had earlier passed on to me. Dr. Paul made one excellent observation about Bob – something rare in the world of intellectuals and thought leaders: though Bob rigidly adhered to the ideas of freedom and liberty, though he was very settled in the philosophy, he was also not unwilling to change his mind about certain things as circumstances warranted. While a vocal critic of Rand Paul the presidential candidate, for example, he later became of the most ardent supporters of Senator Paul as the most libertarian Member of the US Senate. Only the very smart and most confident are willing to factor in new inputs and adjust accordingly.

I started reading Bob’s Economic Policy Journal way, way back while working for Ron Paul on the Hill. I have a distinct memory of driving back from a little jaunt with our then very young children while living in Springfield VA and reading my wife, who was driving, some particularly amazing post from Bob’s Journal (Target Liberty was launched several years later). “Can you believe this??? Wow!!”

Bob and I had a kind of running joke as Dr. Paul and I did our daily Liberty Report: Hardly a week would pass without Dr. Paul and I bringing in something from Target Liberty, giving him full credit, and all of a sudden in the afternoon I’d get an email from Bob with the subject line “I’m watching!” and a link to where we mentioned him.  He was also generous in promoting our Liberty Report. It was the best kind of symbiosis.

I only met Bob in person one time. He was in DC while I was working for Dr. Paul and he suggested we meet for drinks at an open air pub in the city. The conversation was rapid-fire and sharply intellectual (at least on his part!!!), as I remember it. Strangely I know nothing about Bob’s personal life – which in these days of “letting it all hang out” is quite refreshing – but he kind of struck me as a New Yorker. May have been. I had no idea. He kept his privacy, which I admired.

The death of Robert Wenzel has not really begun to sink in. But the entire movement of pro-liberty people and free-thinkers has suffered what feels like a devastating loss.

I cannot imagine waking up tomorrow morning and not having Target Liberty to visit. The world is a darker place without Robert Wenzel. Rest in peace, liberty warrior!