Precisely When Did Trump Plunge and Biden Surge?

This time can be found accurately by using the charts on the Lott Stossel election market site. The link brings up a chart. One must then click on Last Day to get a more precise graph. This is inserted next: 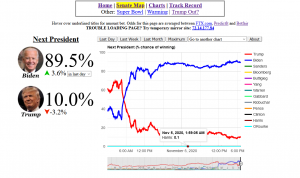 The critical period in which the prediction market altered its forecast surely began at about 4:33 AM and by 7:34 AM, the election odds had completely reversed.

One way to look at this is that we are looking at two samples of votes. Sample 1 is before 4:30 AM, and it is a sample that contains many many millions of votes, and it favors Trump (70.8 to 28.7). This isn’t just some small sample. It’s the vast majority of all votes, and Trump is the expected winner. After 4:30 AM, we get a much much smaller sample that has all the uncounted ballots, but is still much smaller. This has to be very one-sided in favoring Biden in order to lead to a complete reversal of the expected winner, and it must be in critical swing states. These statistical facts make the switch seem extremely suspicious. Why should the mean outcomes of these two samples be so drastically different, as they apparently are? The odds of choosing a red winner and a blue loser (or vice versa) that differ as between these two samples must be extremely low. This is not a probable event if the sampling is fairly drawn from the underlying population of all voters. The fact of their being different, and so much so that the roles are reversed raises a lot of questions about the actual sampling in the late-arrival votes. It suggests that it’s been engineered (fraudulently) rather than being the result of two samples drawn from the population. It’s extremely likely that at a very high level of confidence, one can reject the hypothesis that these two samples have the same sample proportions of blue or red, as the case may be.

It is my view that the prior political behavior of the Democrats for the past 4 years has been so bad in so many ways that this shifts the prior null hypothesis of no fraud toward a prior in which voting fraud is to be expected from them, and there is already evidence that is consistent with this hypothesis.