If We Don’t Nationalize the Police, How Can We Ban the Muslims? 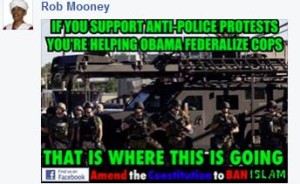 Without a militarized federal police force, how could the U.S. Government enforce a constitutional ban on Islam? (Click to enlarge.)

The anti-war Left fell silent on January 20, 2009. If a Republican is elected in November 2016, we can expect a similar volte-face from that element of the collectivist Right currently warning about Obama’s plans to nationalize police. After all, that same constituency loudly supported George W. Bush’s efforts to create a unitary Homeland Security State, and denounced the administration’s critics as part of a terrorist-loving Fifth Column.

One splendid specimen of that kind of thinking — assuming that word applies — was offered by Marxist retread David Horowitz in a CNN interview with Glenn Beck, in which he claimed that American libertarians — and LewRockwell.com by name — were “totally in bed with the Islamofascists and [have] turned against this country”:

Obama’s successor will inherit an expanded version of the same apparatus Bush helped to build. If the next occupant of the White House is a Republican, the Punitive Populist Right will inevitably demand that he unleash the militarized, federalized police against the “Internal Enemy,” and castigate him for timidity if he fails to do so.