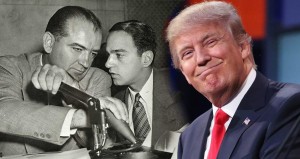 Veteran investigative journalists Robert Parry and Glenn Greenwald, both unabashed progressives, document the sordid and scurrilous McCarthyite smear attacks upon Donald Trump by the deep state’s anointed surrogate Hillary Clinton, her Democratic Party apparatchiks, and the craven regime media. As with “Tail Gunner” Joe, they will do anything to destroy him, his reputation, and his credibility.