Every Facet of Government Is in the Censorship Business

Between the documentation obtained through a recent lawsuit against the White House and the Twitter files released by Elon Musk, it’s become quite clear that every facet of the U.S. government, including its intelligence agencies, are involved in illegal and unconstitutional censorship.

In the video above, Fox News host Tucker Carlson interviews independent journalist Matt Taibbi, who has spent weeks sifting through the released Twitter files and reported on the contents.

FBI Has Gone Off the Rails

Importantly, we now have proof that the FBI has been acting as the key instigator and implementer of the government’s illegal censorship of Americans’ political and medical views. The agency has also, on a regular basis and for unknown purposes, asked Twitter to reveal the location of specific Twitter users, such as actor Billy Baldwin.

What’s more, internal Department of Homeland Security (DHS) memos, emails and documents show the DHS has worked on expanding its influence over tech platforms for years, so, government censorship is not something that came about in response to the COVID crisis. Nor is the censorship limited to COVID or public health information in general.

Evidence shows the FBI has actively interfered in multiple elections — all while inventing the narrative that foreign nations were doing the interfering.1 As noted by Sen. Josh Hawley, R-Mo., these kinds of activities are “the biggest threat to our constitutional democracy today.”2

As just one example, we now know the FBI plotted to quench the Hunter Biden laptop story well before the first report about it was published. In collaboration with Twitter, Facebook and the Aspen Institute, the FBI held a tabletop exercise to practice the shaping of the media’s coverage of a potential “hack and dump” operation involving Hunter Biden material.3,4 As reported by the New York Post:5

“[The] drill was put into practical use weeks later, when The Post broke the news about Hunter Biden’s infamous laptop — which was either ignored or downplayed by most mainstream news outlets and suppressed by both Twitter and Facebook.”

There’s also evidence showing the FBI has been shielding Hunter Biden and working with social media to censor bad press about him as far back as 2018.6 That job was probably made easier by the fact that reportedly former FBI agents work at both Twitter and Facebook.

For example, Jim Baker spent three decades with the FBI before becoming Twitter’s head lawyer,7 and Facebook employs no less than 115 “former” employees of the FBI, CIA, NSA and other intelligence agencies, most of whom now work in Facebook’s content moderation department.8

Twitter Paid to Censor Americans and Promote US Propaganda

Disturbingly, we now also have evidence showing that while Twitter insisted it was cracking down on covert government propaganda accounts, they only tracked down and banned foreign government-affiliated propaganda while working hand in hand with the U.S. Department of Defense to aid U.S. intelligence agencies in their efforts to influence foreign governments using fake news, computerized deepfake videos and bots.9 As reported by The Intercept:10

“Behind the scenes, Twitter gave approval and special protection to the U.S. military’s online psychological ops. Despite knowledge that Pentagon propaganda accounts used overt identities, Twitter did not suspend many for around two years or more. Some remain active …

In 2017 a U.S. Central Command (CENTCOM) official sent Twitter a list of 52 Arab language accounts ‘we use to amplify certain messages.’ The official asked for priority service for six accounts, verification for one and ‘whitelist’ abilities for the others.”

Whitelisted accounts have a “validated” status similar to that of the blue check mark, which ensures they are promoted in searches. These accounts also don’t get shadow-banned or limited by other means. Adding insult to injury, the FBI has been using taxpayer dollars to pay Twitter for their censorship and propaganda services — more than $3.4 million between October 2019 and February 2021 alone.11

The FBI has not acted alone, however. Far from it. The Twitter files reveal members of Congress have a direct line to Twitter and have had accounts suspended on their behalf and content removed at their whim. As reported by MSN:12

“… Taibbi … reported that Twitter ‘received an astonishing variety of requests from officials asking for individuals they didn’t like to be banned.’ An example he shared was one sent in November 2020 by [Rep. Adam] Schiff’s office, who contacted Twitter hoping the tech giant would take action regarding ‘alleged harassment from QAnon conspiracists’ against Schiff’s staff, including aide Sean Misko.

‘Remove any and all content about Mr. Misko and other Committee staff from its service — to include quotes, retweets, and reactions to that content,’ the request to Twitter read. ‘Suspend the many accounts, including @GregRubini and @paulsperry, which have repeatedly promoted false QAnon conspiracies.'”

Other government leaders have been less clandestine in their censoring operations. Sen. Elizabeth Warren, for example, wrote an open letter to Amazon demanding they ban my book, “The Truth About COVID-19.”

Government Has Been Weaponized Against the People

Discovery documents from a lawsuit against the White House13 filed by the attorneys general of Missouri and Louisiana (Eric Schmitt and Jeff Landry) show at least 6714,15 federal employees across more than a dozen agencies are engaged in these kinds of illegal censorship activities. This includes officials from: 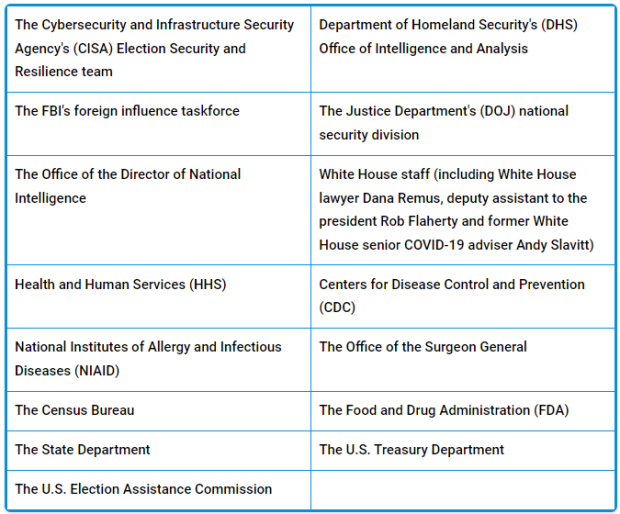 Consultants from the strategic communications and marketing firm Reingold16 were also hired to manage the government’s collusion with social media in this intentional effort to violate our Constitutional right to free speech.

A Look Inside the White House Censorship Machine

In a January 8, 2023, op-ed for The Wall Street Journal, Jenin Younes and Aaron Kheriaty reviewed a series of emails between White House digital media director Rob Flaherty and a Facebook executive, illustrating how the White House pressured the company to censor and remove vaccine content even though Facebook itself characterized the material as “often-true content:”17

“Newly released documents show that the White House has played a major role in censoring Americans on social media. Email exchanges between Rob Flaherty … and social-media executives prove the companies put COVID censorship policies in place in response to relentless, coercive pressure from the White House — not voluntarily.”

Flaherty also demanded Facebook limit the spread of viral content on WhatsApp, a private messaging app with broad reach among “immigrant communities and communities of color.” In the end, Facebook acquiesced to all of Flaherty’s demands to prevent the spread of vaccine hesitancy and control political speech. As noted by Younes and Kheriaty:18

He replied, ‘They’re killing people.’ Mr. Biden later claimed he meant users, not platforms, were killing people. But the record shows Facebook itself was the target of the White House’s pressure campaign.”

White House Pressured Google and YouTube to Do Its Bidding

Flaherty also had Google in his crosshairs, and accused YouTube of “‘funneling’ people into vaccine hesitancy,” adding that this concern was “shared at the highest (and I mean the highest) levels of the White House.”

“These emails establish a clear pattern,” Younes and Kheriaty write. “Mr. Flaherty, representing the White House, expresses anger at the companies’ failure to censor COVID-related content to his satisfaction. The companies change their policies to address his demands. As a result, thousands of Americans were silenced for questioning government approved COVID narratives.

Two of the Missouri plaintiffs, Jay Bhattacharya and Martin Kulldorff, are epidemiologists whom multiple social-media platforms censored at the government’s behest for expressing views that were scientifically well-founded but diverged from the government line — for instance, that children and adults with natural immunity from prior infection don’t need COVID vaccines …

Defenders of the government have fallen back on the claim that cooperation by the tech companies was voluntary, from which they conclude that the First Amendment isn’t implicated. The reasoning is dubious, but even if it were valid, the premise has now been proved false.

The Flaherty emails demonstrate that the federal government unlawfully coerced the companies in an effort to ensure that Americans would be exposed only to state-approved information about COVID-19. As a result of that unconstitutional state action, Americans were given the false impression of a scientific ‘consensus’ on critically important issues around COVID-19.”

Taken together, the revelations from the Twitter files and this lawsuit clearly demonstrate that most, if not all, aspects of the U.S. government have been secretly weaponized to undermine and circumvent the Constitutional rights of the people.

It’s much more serious than what I thought at the beginning. ~ Matt Taibbi

As noted by Taibbi in his Fox News interview:

“This is not a partisan story. It’s a story about the architecture of the intelligence community and law enforcement getting its hands on speech, and on the ability of people to communicate with one another through platforms like Twitter and Facebook. And they’re doing this in a very profound way — it’s much more serious than what I thought at the beginning …”

While the danger we’re in as a nation is far more dire than anyone suspected, there is some good news. A new select committee, chaired by Rep. Jim Jordan, has been launched to investigate the weaponization of government, the politicization of the FBI and the DOJ’s investigation into and harassment of parents who spoke out against COVID mandates, critical race theory and the sexualization of their children at school board meetings. As reported by The Post Millennial:19

“This investigative panel will demand emails and correspondence between the Biden administration and big tech companies, and follows the massive revelations that came to light through the recent release of the Twitter files. Newly minted House Speaker Kevin McCarthy … was asked to form the committee as part of the negotiations that brought him to power …

The probe into communications between tech giants and President Biden’s aides will look for government pressure that could have resulted in censorship or harassment of conservatives — or squelching of debate on polarizing policies, including the CDC on COVID …”

While it’s likely that government personnel and agencies will try to ignore the committee’s requests for information, the committee does have subpoena power, and hopefully will not be too timid to use it.

Unfortunately, since the GOP does not control the Senate, it’s unlikely they’ll be able to pass any new laws based on the committee’s findings. That said, legislation to penalize government censorship has already been introduced, and you can help push it forward by asking your representatives to support it.

The Protecting Speech from Government Interference Act20 (HR.8752), introduced by three Republican House Representatives on the House Oversight and Reform, Judiciary, and Commerce committees, including Jordan, is specifically aimed at preventing federal employees from using their positions to influence censorship decisions by tech platforms.

While the U.S. Constitution clearly forbids government censoring and restricting free speech, HR. 8752 could be a helpful enforcement tool — and we clearly need enforcement, seeing how more than a dozen agencies are flouting the Constitution and have done so for years. People might tend to think twice, though, when they know there’s a personal price to pay.