Before we get into the midterms, here’s something odd.

Yesterday’s email had one of the lowest open rates of the entire year.

It was about what to do during inflationary times (and no, the answer wasn’t just to buy gold and sit there). We’re all suffering from this, so I thought this one would have general appeal.

Well, here’s a link to that email if you’d like to give it another shot:

Now on to business:

The results of the midterms were rather a surprise to many people.

The Democrats ran on a bizarre, anti-human, anti-science, pro-impoverishment platform, in the wake of two years of useless voodoo against COVID. Any sensible country would have beaten them back brutally, such that they would never be heard from again.

That isn’t what happened.

In the old days, progressives claimed to be trying to improve the standard of living of the ordinary person. Everything they advocated would have had the opposite effect, but at least they claimed to be making his life better.

Now they’re not even claiming that.

You will be poorer, they’re telling you. Your electricity bills will be higher. The price of your car will be higher. And according to them, higher prices are in fact a good thing, because they’re supposedly a sign of a strong economy.

At one of Gene Epstein’s Soho Forum debates, someone asked a “climate change” hysteric what his prescriptions would mean for a country like Bangladesh, where the per capita income is between $2000 and $3000 per year. Do they all need to buy electric cars that cost 20 to 30 times what they earn in a year?

Yes, I’m sure the international community will fork over $4 trillion to subsidize electric-car purchases in Bangladesh.

Bangladesh simply will not be able to develop, period.

Back to U.S. politics:

Imagine having more than two years of your life taken from you, for what you now have to know was no good reason and which accomplished nothing, and not even caring. Imagine not wanting to repudiate the people who did this to you and your children as vigorously as possible.

That’s evidently half of America. 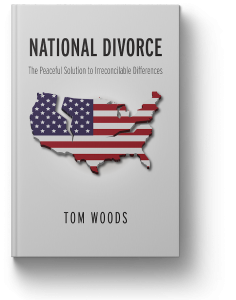 Tomorrow on the Tom Woods Show Dan McCarthy, editor of Modern Age, joins us to discuss what happened, what lessons should be learned, and why he thinks it isn’t grounds for utter despair.

We should start the discussion about national divorce.

We have contending parties that view the world altogether differently. We can continue the low-intensity civil war in perpetuity, or we can give up trying to build the Tower of Babel.

Auron MacIntyre has the correct response:

I’ve just released a free eBook on this very subject.

Read chapter one, at least. You’ll never look at the world the same way again.

Paxlovid Is a Fraud, When Will It Be Taken Off the Market? Balkanized Future: Midterms Deliver Victories For Both Free State Americans and Security State Americans