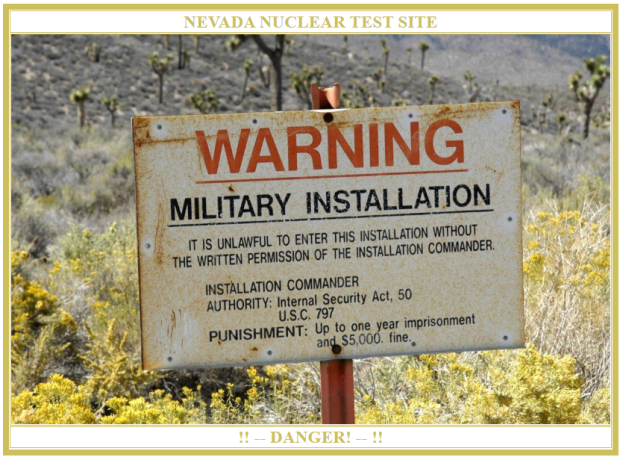 Girl George and I are speeding up highway 93 from Vegas, headed for a card-counting stint in Reno. There’s a section of highway 93 that skims the edge of the notorious Nevada Test Site where a lot of the nuclear weapons testing in the world has been done — and Area 51 which conceals – – – SOMETHING!! – – –

Normally, since we don’t usually carry a Geiger counter, we hardly even notice. All you can really see is a fence with hanging signs that give dire warnings against trespass on a Federal facility. As above.

The FEDS still claim ownership of about 87% of the land in Nevada, so such signs aren’t that unusual. The FEDS also claim like proportions of Arizona, Alaska, Colorado, etc. and even 45.77%% of California.

Perhaps the FEDS should sell that off to help pay the humongous bills they’ve run up instead of foisting them off on the kids, grand kids and the yet unborn as the so-called “National Debt” — and the unfunded liabilities from Social Security and Medicare, etc. Vin Suprynowicz and others appropriately call the I.O.U.s used to fund this “extortion futures,” A.K.A. (Also Known As) “U.S. Treasurys.”

But this time, there’s something different. On the opposite side of 93, there’s some sort of encampment with a lot of husstle, bustle, and purposeful activity. And, by the multitude of tent shapes, colors, and their erratic arrangement, it’s clear it isn’t military — or even directly FED connected.

Usually on this boring trip, nothing short of the call of nature would even slow us down. But somehow this is different. George and I look at each other. Something about the incongruity of a bunch of “civilians” camped across from a semi-super-secret government site in the middle of barren desert says firmly to both of us, “Stop! See what the heck is going on!”

We turn around and go back. We pull off the road next to some of the other vehicles parked helter-skelter around the area and dismount. Almost immediately a smiling well mannered guy in bluejeans and plaid shirt appears.

Proffering a handshake, “Glad you could make it,” he says, as if he was expecting us.

“Happy to be here,” says George, stepping forward and shaking his hand.

The mannerly guy smiles even wider. “To help us protest nuclear weapons and tests, of course,” he answered. “You’re just in time. We’re about to do a civil disobedience.”

He turns, motions us to follow, and heads across the uneven caliche toward the encampment. There are dogs, cats, children playing, women sitting and embroidering, knitting, etc.. People are even reading – – –

A fairly large group is gathering. Perhaps three hundred folks are purposely if chaotically coalescing around a small raised platform. There’s a lot of earnest face-to-face palaver. The impression is enthusiasm for the completion of an important project they’ve all been working toward.

We wander into the slo-mo melee. Two women look up as we approach. “What’s going on?” I ask.

“Oh, this is the Quaker encampment,” one says.

Apparently noting my quizzical look, the other one explained a bit: “Some of us have been here for a week. Today we’re going to do it.”

“There are more than just Quakers,” explains the other.

“Quaker!” That jarred my memory. This was the protest the RJ (Las Vegas Review Journal) had mentioned on page 2 a couple of times. The American Peace Test.

I look at George. She looks at me. “Sounds subversive,” I say. “Good, I certainly hope so,” she responds.

About then a relative hush interrupts the cacophony around us.

People are turning to the platform. Mr.-smiley-with-the-plaid-shirt had just assumed position on it.

“Ah, please leave some room up front here,” he says, gesturing with the bullhorn.

“OK, as many of you know, we’re here to do a little more than just make noise against the war establishment. We’re going to remind them that a lot of the people they serve don’t like what they’re doing. AND we’re going to cost them a little money too. And maybe some day, change history.”

“Now those of you who are ready to do the disobedience please step forward.”

Somewhere between thirty and forty people, about half women, step forward into the space we’d cleared around the platform.

“These are the people who are going to cross the fence-line,” he says.

“They’ve decided to take this action on their own, and we’ve helped them ready themselves for what will happen. They’ve all pledged non-violence and learned how to do it. They won’t resist at all. Not this time.”

Muted but enthusiastic cheers erupt from the group.

I’m ambivalent about the non-violence part. They’re protesting one of the most violent things a government can do, and this one has already done it twice in three days: Once to Hiroshima and, three days later, to Nagasaki. And, as President, Eisenhower admitted later, “It wasn’t necessary to hit them with that awful thing.“

“Now don’t any of you feel left out or ashamed that you haven’t decided to join these brave people. There are other important things that need to be done too.

“One of those things is to act as support for these folks. Since they will be held for at least 48 hours, they may need someone to feed their pets, etc. Some are from Las Vegas and may need to have newspapers picked up so not to attract burglers. So, any of you who are interested in helping that way, please step forward and pair-off with someone in the first group.”

Almost twice as many step forward and most of the fence-crossers end up with two helpers.

He turns back to the rest of us.

“And all the rest of you, you’re performing a very important service by being here. You are bearing witness. I’m not saying that to make you feel good. We Quakers understand the importance of bearing witness.

“Perhaps you’ll tell your friends what you see here today, maybe some day give a talk or write an article about it. Maybe this will help people in the future know how to resist evil.

As you can see, in my case at least, he was correct about writing that article – – –

“And now a moment of silent prayer for our brothers and sisters who are our front line,” he suggests.

Even I bow my normally recalcitrant head.

“Thank you for coming,” he says. “Maybe we’ll see you next year.”

Mr.-smiley-with-the-plaid-shirt unceremoniously steps off the platform. No one says anything that I notice, but he and the rest of the line-crossers begin to drift across 93 toward the fence with those scary warning signs.

The rest of us follow. The crossers hesitate till everyone gets to the fence. Then, nearly coordinated, they all duck and step through the fence-wire and walk slowly forward, almost but not quite in cadence.

By this time, there’s a whole herd of Wackenhut security ciphers waiting for them. Apparently the Feds are already out-sourcing.

As the line-crossers walk toward the Wackenhut herd — which outnumbers them perhaps three to one — they all hold their hands out in front.

It only takes me a long ten seconds to realize that was so they could be handcuffed which proved they were non-violent to anyone with more than two brain cells operating. Apparently that hands-out-in-front posture had been part of their preparation.

But, apparently, the herd had also been prepared. Clearly to be much more brutal than necessary.

They yank the proffered hands behind the non-violent protestors’ backs — women included — and bind them with what looks like giant nylon zip-ties, you know the things used to keep bundles of wires and tubes together, the things that when the end is pulled, rachet tighter and tighter.

Now ubiquitous, this is the first time I’ve seen or heard of such a use for zip-ties. The Wackenhut temps pull the ends. Hard, and several times. The protestors wince and several of the women beg to have the zip-ties loosened but to no avail.

Clearly the Wackenhut temps have less than three brain cells in operation. Or maybe they’ve been chosen for their natural tendencies.

Here’s how to break these ties should you find yourself in need of that skill. And there’s a similar tactic to escape duct-tape handcuffs.

How to break cable-tie handcuffs

As they are shoved away over the brow of a hill, apparently to busses or something, a bunch of the witnesses — likely the Quakers — kneel and begin to silently pray. Although an avowed agnostic, I’m strongly tempted to join them.

I remember sitting around Jim Gilbert’s dining room table for lunch during the Cuban Missile Crisis and contemplating a radioactive future in the Connellsville limestone quarry caves. And Missile Command.

And particularly this meticulous re-creation from the movie “War Games.”

How to fix the population explosion – – –

Are the M.A.D. bastards still at it??

Still M.A.D. After All These Years?

Clearly, YES THEY ARE!!

M.A.D. is the acronym for Mutually Assured Destruction — which is exactly what it sounds like. Following this plan, governments nearly nuked-out all life on earth multiple times, and still risk doing it today. Unfortunately, as you can see, I’m NOT making this up.

Someone handed me a booklet. It was “American Peace Test. Nonviolence Trainers’ Manual.” The successor is probably Trainers’ Resource, Manual, 1st Edition, May 2005. Since you’ve been “bearing witness,” perhaps you’ll need it one day?

But there’s a blockade to ending M.A.D. — and to peace. It’s a genetic throw-back existing in about 1% of us — and that genetic type has managed to hi-jack nearly all large “modern” cultures. As of 2022, this is poorly understood but it’s the key to realizing any significant improvement.

Here is that missing key – – – and it answers a very perplexing question:

What Went Wrong With The Worldwide Socialist Revolutions?

Unexpectedly educated — and oddly chastened by our previous ignorance — and with visions of non-violent rebellion dancing in our heads, George and I resume our trip to Reno.

Previous article by L. Reichard White: If Trump Had Been Sworn-in Instead of Biden, Would There Be a War in Ukraine?