The Most Inflation-Resistant Money the World Has Ever Known

Hardness is the most important characteristic of a good money.

Hardness does not mean something that is necessarily tangible or physically hard, like metal. Instead, it means “hard to produce.”

By contrast, “easy money” is easy to produce.

The best way to think of hardness is “resistance to inflation,” which helps make it a good store of value—an essential function of money.

Would you want to put your savings into something that somebody else can create with no effort or cost?

Of course, you wouldn’t.

It would be like storing your life savings in Chuck E. Cheese arcade tokens or airline frequent flyer miles.

Unfortunately, putting your savings into government currencies isn’t that much different.

What is desirable in a good money is something that someone else cannot make easily.

The “stock” part refers to the amount of something available, like current stockpiles. It’s the supply already mined. It’s available right away.

The “flow” part refers to the new supply added from production and other sources each year.

A high S2F ratio means that annual supply growth is small relative to the existing supply, which indicates a hard asset resistant to inflation.

A low S2F ratio indicates the opposite. A low S2F ratio means that new annual supply can easily influence supplies—and prices. That’s not desirable for something to function as a store of value.

In the chart below, we can see the hardness of various physical commodities. 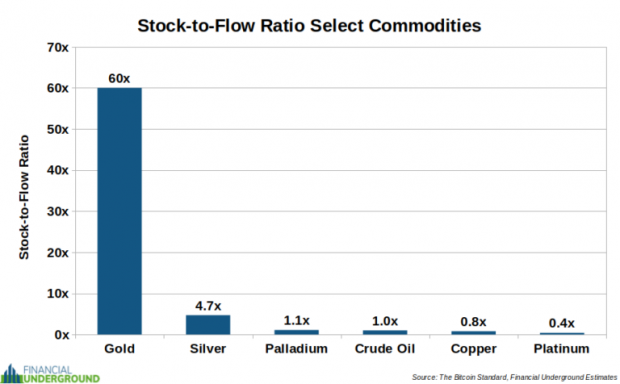 Monetary commodities such as gold and silver have higher S2F ratios. Industrial commodities have low S2F ratios, typically around 1x.

With an S2F ratio of 60x, it would take about 60 years of the current production rate to equal the existing gold supply.

Another way to think of it is to look at the inverse of the SF ratio, which is the annual production rate relative to existing stockpiles.

So, for example, gold’s yearly production is about 1.7% of its existing stockpiles.

In short, no other physical commodity comes close to gold’s hardness or resistance to inflation.

Unlike silver, gold doesn’t decay or corrode. That means that most gold people produced even thousands of years ago is still around today and contributing to current stockpiles.

Second, unlike other metals, gold has a history of thousands of years of production.

That means nobody can arbitrarily increase the gold supply, which helps make it a neutral store of value. It’s what gives gold unique and unmatched monetary properties among other metals.

Hardness is the most important characteristic of a good money. All other monetary characteristics are meaningless if the money is easy for someone to produce.

But now gold has a serious competitor…

Today, Bitcoin’s S2F ratio is about 57x, slightly below gold’s.

According to its immutable protocol, we know precisely how Bitcoin’s supply will grow in the future.

A key feature is that the new supply gets cut in half every four years, which causes Bitcoin’s hardness to double every four years. It’s a process known as the “halving”—or what I like to call “quantitative hardening.”

The next time Bitcoin’s supply growth will be cut in half will be in May 2024.

When that happens, Bitcoin’s hardness will be almost twice that of gold. 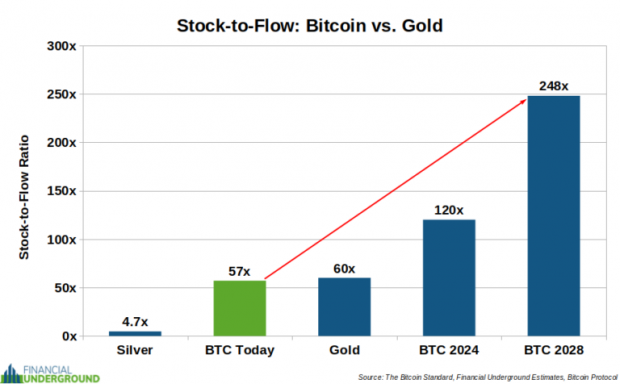 That’s how Bitcoin could become the hardest money the world has ever known in May 2024. And it will keep getting harder.

The one resource that has been most influential on my thinking about Bitcoin and money is The Bitcoin Standard: The Decentralized Alternative to Central Banking. The author, Saifedean Ammous, is a sound Austrian economist and an old friend from when I lived in Beirut, Lebanon. I consider his book to be essential reading.

Scarcity is Not Hardness

It’s important to clarify that hardness is not the same as scarcity. They are related concepts but not the same thing.

For example, platinum and palladium are scarcer than gold, but they are not hard assets. Current production is high relative to existing stockpiles.

Unlike gold, stockpiles of platinum and palladium have not built up over thousands of years. It’s the primary reason why new supply can easily rock the market.

Because of their low S2F ratios, platinum (0.4x) and palladium (1.1x) are even less suitable as money than silver. Their low S2F ratios indicate they are primarily industrial metals, which corresponds to how people actually use them today.

Bitcoin’s current and future supply is finite and known to all.

There will never be more than 21 million Bitcoins, and there is nothing anyone can do to change that—not even Elon Musk, Jeff Bezos, the Chinese government, the US government, or any of these powerful entities combined.

Even if Satoshi Nakamoto—Bitcoin’s anonymous cypherpunk creator—came back after disappearing in 2011, he would not be able to alter Bitcoin.

That’s what gives Bitcoin genuine scarcity and credibility as a neutral money.

The supply of Bitcoin won’t grow much at all from here.

The current supply is over 19 million, which means more than 90% of the total Bitcoin supply has already been created.

The remaining 10% will come on to the market at a preset, ever-decreasing rate until the last Bitcoin is created around 120 years from now, in 2140.

By the end of this decade, over 98% of all Bitcoins will have already been created. 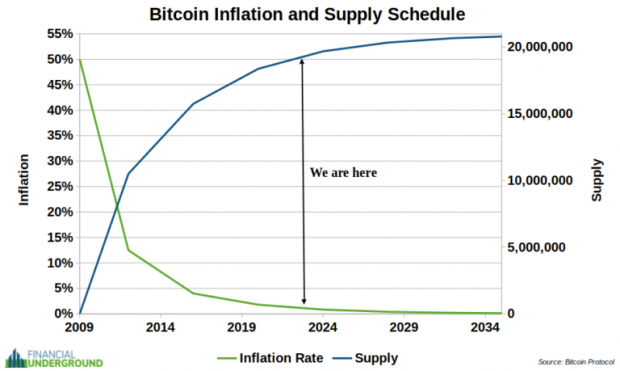 No other monetary asset has this kind of certainty of future supply.

The closest comparison is with gold.

That much is what is known.

However, we don’t know how much gold will be discovered and mined in the future.

For example, how many mined ounces of gold will be available on June 1, 2031?

We can probably make a pretty accurate projection, but nobody can know.

According to the immutable protocol, it will be around 20,589,121 Bitcoins.

Bitcoin has another unique scarcity attribute.

It isn’t just scarce. It is absolutely scarce.

For example, imagine the price of copper going 5x or 10x.

You can be sure that would spur increased production, eventually expanding the copper supply. Of course, the same is true of any other commodity.

The dynamic of higher prices incentivizing more production and ultimately more supply, bringing prices down, exists with every physical commodity. However, gold is the most resistant to this process.

That supply response is why most commodity prices tend to revert around the cost of production over time.

However, Bitcoin totally defies this dynamic because its supply is perfectly inflexible. It’s the only commodity where higher prices cannot induce more supply.

In other words, Bitcoin is the first—and only—monetary asset with a supply that is entirely unaffected by increased demand.

That is an astonishing and game-changing characteristic.

Gold and other commodities are scarce, but only Bitcoin is absolutely scarce.

Unlike every other commodity, increasing the supply in response to increased demand is not an option.

That means the only way Bitcoin can respond to an increase in demand is for the price to go up.

Data Justifying the Claims I Made on Fox News on Aug 10 Ideology, Abstractions, and Terror