Both Sweden and Finland have applied for membership within the North Atlantic Treaty Organization this week, with both countries ending their long-standing policy of neutrality. On Wednesday, several NATO members announced they would immediately extend NATO-like military defense to both Finland and Sweden. In a joint statement, Denmark, Iceland, and Norway announced: “Should Finland or Sweden be victim of aggression on their territory before obtaining NATO membership, we will assist Finland and Sweden by all means necessary.”

The Biden administration made an identical pledge, noting in a White House statement that while Sweden’s and Finland’s:

applications for NATO membership are being considered, the United States will work with Finland and Sweden to remain vigilant against any threats to our shared security, and to deter and confront aggression or the threat of aggression.

Although neither statement mentions Russia, it is clear that both statements were aimed at Moscow in terms of communicating that—regardless of what the formal membership process may be—both Finland and Sweden will immediately become de facto members of NATO.

Also within the Biden statement was the often-repeated—and false—claim that the expansion of NATO benefits Americans overall:

NATO guarantees the security of one billion people in Europe and North America…. By joining NATO, [Sweden and Finland] will further strengthen our defense cooperation and benefit the entire Transatlantic Alliance.

But there are numerous problems with this claim. NATO membership has nothing to do with enhancing the defense of ordinary Americans. The American elites love NATO, of course, because it expands regime spending and influence in Europe. But when it comes down to actual military defense, expanding NATO only increases the odds that Americans will be pulled into a major conflict while offering Americans nothing in return.

Moreover, the Russian regime’s inability to overrun Ukraine has demonstrated that Moscow presents no threat to Europe that the Europeans cannot quite thoroughly counter themselves.

But there’s one way to make the addition of Sweden and Finland to NATO a good deal: NATO can add whatever countries it wants so long as the United States leaves as part of the bargain.

Back in March, we examined the extent to which the US taxpayer overwhelmingly covers the costs of NATO.

For example, the total military spending of all NATO members combined is more than $1 trillion. So how much of this total is provided by US taxpayers? In the first graph, we see that the US’s share of this is 70.5 percent, and that the top ten contributors constitute 95.0 percent of all military spending. That is, the US contributes 70 percent of all NATO defense dollars while the next nine states contribute an additional 25 percent. The other twenty NATO member states contribute a meagre and forgettable 5 percent of all spending. 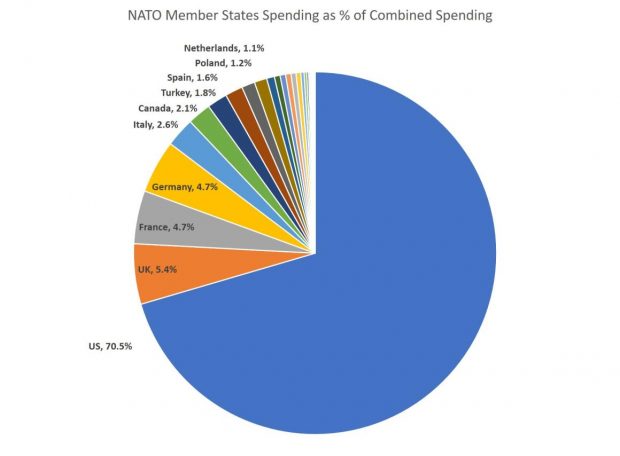 With the addition of Finland and Sweden, those countries that contribute negligible amounts to NATO’s defense spending will increase to twenty-two. But the situation will remain essentially the same.

According to the Stockholm International Peace Research Institute, Sweden’s total military spending in 2020 was $6.2 billion, which places it between Romania and Norway. Finland’s total spending of $3.9 billion places it between Portugal and Denmark. These tiny numbers aren’t surprising. Finland has a gross domestic product about the size of Missouri’s, while Sweden’s GDP is about the size of Massachusetts’s. 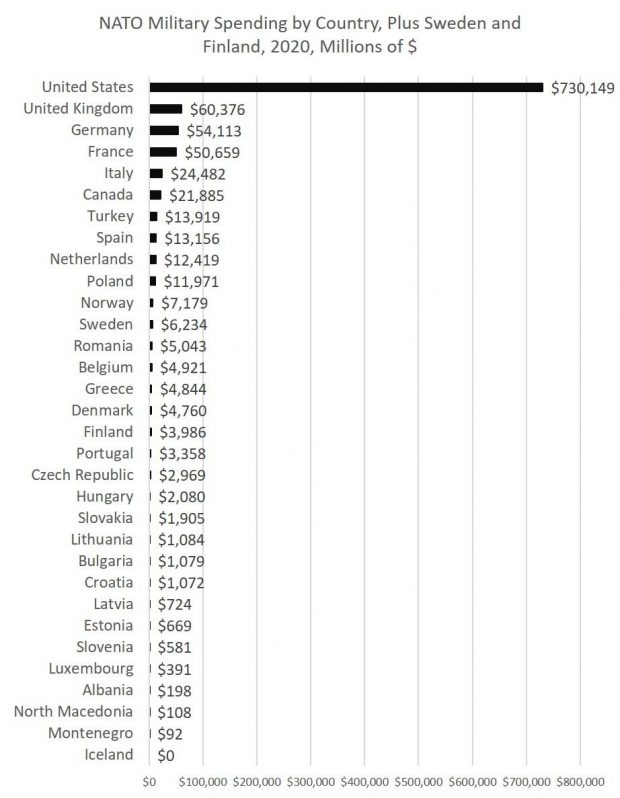 It’s possible that adding Finland and Sweden into the mix could drop the US share of total NATO defense spending to 70.0 percent or 69.0 percent. In any case, Europeans can continue to milk the US taxpayer dry for security guarantees. After all, as non-NATO members, Sweden and Finland spend approximately 1.2 percent and 1.5 percent of GDP on military spending, respectively. (It’s 3.7 percent for the US.) As NATO members, there is no real incentive for Finland and Sweden to spend any more. Given that NATO doesn’t really enforce its “rule” that all members must spend 2.0 percent of GDP, we can expect more business as usual should Sweden and Finland join the alliance.

What do Sweden and Finland contribute to US security? Biden claims both countries will “benefit the entire Transatlantic Alliance.” Of course, they will do no such thing. Finland, especially, is a net liability due to its long land border with Russia and its maritime border in the vicinity of St. Petersburg.

Here’s the problem with that. NATO started out as an arguably reasonable alliance of Western European states with multiple buffer states between NATO and the Soviet Union. The only land border shared between Russia and a NATO state at that time was in the distant north of Norway. Yet, after years of expansion, NATO has expanded right up to Russia itself throughout the Baltic and around Kaliningrad. Since NATO demands an “attack” on one member be treated as an attack on all members, this can turn small regional disputes into a global war. Now, NATO wants to add to the potential for such a situation by adding the Finland-Russia border into the mix. Should Finland or the Baltic states get into a regional conflict with Russia, how many Americans will be asked to die to defend the distant reaches of eastern Europe?

If anything illustrates now is a good time for the US to leave the alliance, it’s the lackluster performance of the Russian military. The US should never have pledged itself to Europe’s defense on legal, moral, and practical grounds. But, there always remained the consequentialist argument that without the US in NATO, the Soviets would roll through Paris and Rome and Madrid, imposing Soviet despotism everywhere. Once the enormous Soviet military disappeared from the globe, this same argument was then recycled with “Russia” replacing “Red Army.”

The threat of the Soviets to Europe was always exaggerated, but the claim that Russia presents an existential threat to Europe is not even plausible. The situation in Ukraine has made this abundantly clear. The international Western media, after all, has itself told us that Russian military personnel are incompetent and woefully inept when it comes to carrying out the assumed occupation of Ukraine. Western reports routinely assert that Russian troops are retreating, failing, and sustaining heavy losses. Meanwhile, Ukraine is a country with a GDP per capita that’s less than half of Russia’s. Ukraine is thoroughly undeveloped industrially, and relies heavily on weapons gifted by outsiders. If the Russians can’t even make short order of Ukraine—a country right on Russia’s border—how will that same military roll through Prague?

Yet, even while the media labels the invasion a complete debacle, we’re also being told by pundits and “experts” that without defense guarantees from the Americans, Helsinki will soon be Russian territory. It’s extremely doubtful that both claims can be true.

In any case, whatever the Western propaganda narrative currently claims, the fact is Russia has a second-rate economy coupled with demographic decline at least as bad as that seen in the rest of Europe. Russia’s GDP—and thus its access to military resources—is a small fraction of that of the European Union. In other words, Russia simply lacks what is needed to present any real threat to Europe. The lack of quick progress in Ukraine is only the latest evidence of this.

The Europeans are welcome to keep NATO going if they like. They’re more than capable of doing so. But the time has come for the United States to exit.

Previous article by Ryan McMaken: Expect Washington To Throw a Fit over China's New Deal with the Solomon Islands

Nukes? Is Putin Bluffing? Why You Can Stop Whining About Censorship