Covid Criminal Network Leads to the Gates of Hell

The video above, by the German Club Der Klaren Worte, or the Club of Clear Words, takes a deep dive into the network of individuals and organizations responsible for the COVID scam. The audio is in German but there is a captioned translation at the bottom of the video.

The review is led by journalist and filmmaker Markus Langemann. As noted by Langemann, it’s not necessarily the people with the best ideas who win in life. Rather, the winners are those who are in the “right” network — a network with people in the right places. Never underestimate the power of a network.

Some networks are visible. One example would be an alumni network that you can join and use to promote your career. Other networks are more hidden, secretive and exclusive, and can only be entered into by select invitation by another member.

Whether blatantly visible or not, you can identify just about any network by connecting dots between individuals and organizations. Who’s working with whom, where, and why? Who’s paying whom? And once you’ve done that, you can more clearly identify the motivations behind various decisions.

In this video, Langemann presents “a network document that is unique in the world and which for the first time shows you the complex network of relationships, from non-governmental organizations (NGOs), companies, documents and people.”

The 170-page document details more than 7,200 links between 6,500 entities and objects, including payment flows and investments.

“In the case of the Bill & Melinda Gates Foundation, already on page 4 of the document, you see that this foundation spent $43 billion [note that is billion with a “b”] in the U.S. alone in the period from 1994 to 2001, and distributed around half a billion dollars in Germany during this period,” Langemann says.

You can review and download the document here.1 The document is mostly in English. It’s incredibly comprehensive in scope, detailing a global network that is working behind the scenes to influence global health, finance and governance.

As an interesting aside, the document was actually created using software that investigators and detectives use to help them identify hidden connections between potential suspects. All of the data points, documents, payment data and so on, are publicly available.

Red arrows are used throughout the document to indicate money flows, such as grants, donations and other payments. As one example, as shown on page 3 of the document, at least 21 U.S. universities are financed by and through just three key organizations:

According to the anonymous IT specialist who created the document, the core of this “COVID criminal network,” around whom most everything revolves, is no larger than 20 or 30 people. Several of them appear on page 36.

They got together May 8, 2019, at a CDU/CSU event where they discussed how to strengthen global health and implement the United Nations Sustainable Development Goals. The CDU/CSU is a political alliance of two German political parties, the Christian Democratic Union of Germany (CDU) and the Christian Social Union in Bavaria (CSU). Attendees included: 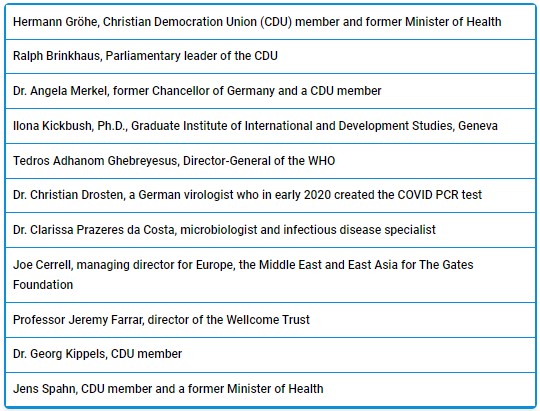 From that May 2019 meeting onward, these individuals are found again and again, in overlapping working groups. You also find them rubbing elbows in the past.

For example, Farrar, Drosten and Kickbush were all present at a February 14, 2019, tabletop exercise on International Response to Deliberate Biological Events, held at the Munich Security Conference, as shown on page 124. Individuals from the Robert Koch Institute, the Chinese CDC and the Gates Foundation were also present.

In 2017 and 2018, Kickbush, Drosten and Farrar were added as members to the International Advisory Board on Global Health. Farrar and Kickbush also joined the Global Preparedness Monitoring Board, a joint arm of the WHO and the World Bank, formally launched in May 2018. (Dr. Anthony Fauci is another member of this board.) Two other key persons within this network are:

Due to the complexity of the network connections, there’s really no easy way to summarize them here. You simply have to go through the document, page by page. That said, key organizations, whose networking connections are detailed, include: 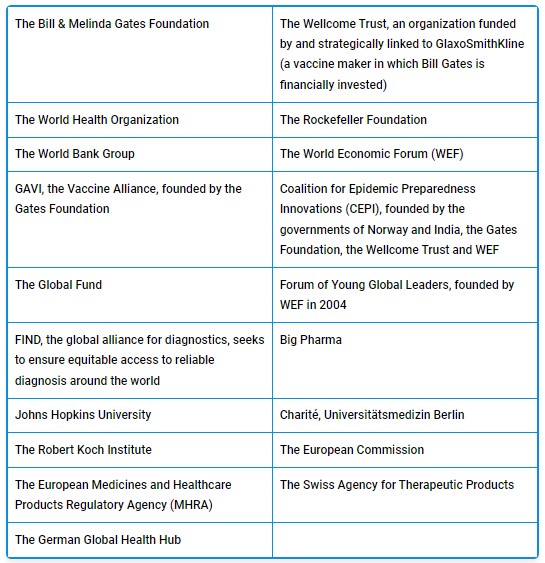 Of these, The Bill & Melinda Gates Foundation appears to be near the top, or the center, of this criminal network, depending on how you visualize it. Gates is also a major funder of mainstream media which, of course, is important if you want to ensure one-sidedly good press.

In the past, the Bill & Melinda Gates Foundation funded the placement of “educational” messages in popular TV shows such as “ER,” “Law & Order: SVU” and “Private Practice,” including topics such as HIV prevention, surgical safety and the spread of infectious diseases, i.e., vaccinations.2 But that was only the beginning.

More than $38 million of Gates’ money has also been funneled to investigative journalism centers. The majority of that money has gone into developing and expanding media in Africa.4 As you might suspect, Gates’ donations come with strings attached. As reported by Columbia Journalism Review:5

“When Gates gives money to newsrooms, it restricts how the money is used — often for topics, like global health and education, on which the foundation works — which can help elevate its agenda in the news media.

For example, in 2015 Gates gave $383,000 to the Poynter Institute, a widely-cited authority on journalism ethics … earmarking the funds ‘to improve the accuracy in worldwide media of claims related to global health and development.’ Poynter senior vice president Kelly McBride said Gates’s money was passed on to media fact-checking sites …

Since 2000, the Gates Foundation has given NPR $17.5 million [now up to $24.6 million6] through 10 charitable grants — all of them earmarked for coverage of global health and education, specific issues on which Gates works.”

Who Else Controls the Media?

Gates’ power over the media is immense, but he’s a not a sole actor. Other players in media control include BlackRock and the Vanguard Group, the two largest asset management firms in the world, which also control Big Pharma.7 They’re at the top of a pyramid that controls basically everything, but you don’t hear about their terrifying monopoly because they also own the media. As noted in the video, “The Puppet Masters Portfolios,” Vanguard and Blackrock:8

As it stands, it’s important to be aware that conventional media are under the control of powerful influences — be it Bill Gates, BlackRock or Vanguard — and their primary intent isn’t to give you objective information but, rather, to further the agendas of those influences.

Who Really Owns the World?

BlackRock and Vanguard also own shares in an impossibly long list of virtually every major company in the world. Aside from world media, the companies controlled by Blackrock and Vanguard span everything from entertainment and airlines to social media and communications9 — quite literally everything you can think of, and much that you can’t.

Together, they form a hidden monopoly on global asset holdings, and through their influence over our centralized media, they have the power to manipulate and control a great deal of the world’s economy and events, and how the world views it all.

In all, BlackRock and Vanguard have ownership in some 1,600 American firms, which in 2015 had combined revenues of $9.1 trillion. When you add in the third-largest global owner, State Street, their combined ownership encompasses nearly 90% of all S&P 500 firms.10

Interestingly, Vanguard also holds a large share of Blackrock. In turn, Blackrock has been called the “fourth branch of government” by Bloomberg as they are the only private firm that has financial agreements to lend money to the central banking system.11

In addition to his grip on global health and media, Bill Gates’ network also includes global food and agricultural policy. He’s even one of the largest farmland owners in the U.S.16 Were Gates a proponent of organics, his land ownership would probably be seen as a good thing, but he’s anything but.

On the contrary, not only is he a longtime proponent of GMOs and toxic agricultural chemicals, he’s also gone on record urging Western nations to switch to 100% synthetic lab-grown imitation beef, and has railed against legislative attempts to make sure fake meats are properly labeled, since that will slow down public acceptance.17

Not surprisingly, Gates is financially invested in most of his proposed “solutions” to the world’s problems, be it hunger, disease, viral pandemics or climate change.18

It’s these kinds of self-serving endeavors that have earned Gates the unofficial title of the most dangerous philanthropist in the world. As noted by AGRA Watch,19 Vandana Shiva, Ph.D., and others, Gates’ philanthropy creates several new problems for each one he promises to solve, and can best be described as “philanthrocapitalism.”

Again and again, Gates’ globalist approach to farming has had devastating consequences for food and environmental sustainability in general and local food security in particular. It is profitable for Gates and his corporate allies, though, and furthers the technocratic plan to control the world by owning all the world’s resources.

[The Great Reset] is a vision for transferring the world into a totalitarian and authoritarian surveillance state manipulated by technocrats to manage traumatized populations, to shift wealth upward, and serve the interests of elite billionaire oligarchs. ~ The Defender

The WEF, founded by technocrat figurehead Klaus Schwab, is just one of the global nongovernmental agencies that help promote Gates’ destructive agricultural and fake food agenda.

The Great Reset of Life as We Know It

The Gates Foundation, through its funding of the WEF, also plays an important role in The Great Reset, which was officially unveiled during a WEF summit in May 2020. As reported by The Defender, the Great Reset:20

“… is a vision for transferring the world into a totalitarian and authoritarian surveillance state manipulated by technocrats to manage traumatized populations, to shift wealth upward, and serve the interests of elite billionaire oligarchs.”

Every conceivable aspect of life and society is scheduled to be “reset” according to their plan — including global food policies. Leading that specific charge is an organization called the EAT Forum, cofounded by the Wellcome Trust, which describes itself as the “Davos for food.”

As you can see, no matter what network you’re looking at, be it global health, finance, media, environmental policy or food, the Gates Foundation, WEF and Wellcome Trust are there, and tying it all together is The Great Reset plan, with its Fourth Industrial Revolution (another Schwab concoction), which is the transformation of humanity itself into internet-connected cyborgs.

Ultimately, that’s where this criminal COVID enterprise is trying to take us. To prevent that dystopian nightmare from becoming our lot, we need to see the hidden networks working behind the scenes.

We need to recognize that decisions are not made by chance. There’s a plan, and decisions in seemingly disparate areas actually have the identical aim. You can’t see that if you’re thinking that people, organizations and even countries are working independently.

They are in fact networked, which is what makes them so powerful. The thing that can interrupt or break that power is public insight into these networks, and understanding that the ultimate goal of all of them is to “reset” and “rebuild” civilization (“Build Back Better”) into one of their own making.

Has Putin Won Round One in Ukraine? Trudeau’s Imminent False Flag To Crush the Canadian People