The Resistance in Versailles

As I am writing all eyes are on the heroic truckers and their supporters in Ottawa. Here in France we have had weekly demonstrations against the vaccine passes and mandates for the months since last summer. I have attended a handful of the big marches in Paris. But my regular little corner of the resistance to global tyranny has been in Versailles (I live in Meudon in between Paris and Versailles). Every Saturday, rain or shine, often cold, at 11 AM in front of the mairie (the city hall) a small group (100-300) of people have gathered to protest (manifester in french, so a demonstration is called a manifestation) the Covid policies of the French government. This is surprising because Versailles has a relatively small population (82k) and is very bourgeois. A definition of the bourgeoisie in English is “the middle class, typically with reference to its perceived materialistic values or conventional attitudes.” In France the bourgeoisie is very Catholic, potentially aristocratic, and relatively wealthy; thus, somewhat above the middle class. So these protests are unprecedented in Versailles.

The demonstrations themselves consist of a few minutes of speeches followed by a march through the city. I enjoy walking through Versailles, a town with an incredible history and architecture. For example, one of the regular routes is through the quaint Quartier St. Louis and the open market where I suppress the temptation to stop and buy the wonderful products.

The demonstrations are organized by two members of the city council, Mme. Jullié and M. Sigalla. Both of them exhibit incredible energy. Sigalla normally gives an astute monolog on the state of the resistance, incredible for a politician (if he is a real politician). But the most incredible fact is that the passionate and thin M. Jullié is the mother of 12 children! 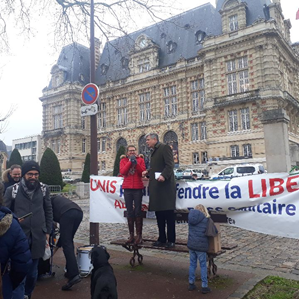 My two favorite comrades at the demonstrations have been the two ladies carrying the love revolution banner below (note Louis XIV on the horse in front of the world famous chateau in the background). One is from California and the other is from Ireland. They are devotees of the English comedian Russell Brand, hence the theme of the banner. I felt compelled to explain to them that the Love Revolution started with the great Ron Paul presidential campaign. In any case, they are enthusiastic, fun, and have growing awareness of the real world conspiracies that are the true currents of our age.

I am not an activist. I am literally not vocal. My contributions to the chants are at less volume than a normal conversation. But I hope my physical presence brings that infinitesimal addition to public opinion that combats the growing tyranny.