New Revelations in the US + What's Happening in Israel Today

What a mess. Tony Fauci lied to Congress, they deliberately covered up the lab origin theory, and the situation in Israel today is totally unstable. We're next.

I’ve said this many times before, the entire pandemic response has been an unmitigated disaster. If we had just told people about the Fareed-Tyson early treatment protocol back in March of 2020, COVID would have been a non-event: COVID hospitalization and death would be tiny.

If you want to protect yourself from COVID, it’s simple and obvious: wear a 3M 7502 mask with a P100 filter. Done. But they never tell you that! Never! Nobody tells you that. Instead, they all tell you to do an intervention (wear a cloth, surgical, or N95 mask) which won’t protect you at all, and can potentially harm you (oxygen deprivation + risk of respiratory viruses). And then they compound their bad advice on prevention and treatment by mandating you take a vaccine that kills 15 people for every person it might ever save. And even if the vaccine was safe, it still causes negative efficacy (makes you more likely to be infected compared to not taking it). This just shows you how inept the authorities (and “experts”) are.

Early treatment was really the only intervention we ever needed treat COVID. But fat chance of that ever happening. No nation on earth is that smart to acknowledge that. I don’t think it’s ever going to happen because nobody wants to admit they were wrong.

Too bad no public official in the US is calling for a debate on this with our team of scientists. They don’t want to be exposed as incompetent.

We now know that NIH knew the virus was man-made (since they funded it) and then when it was released, they deliberately covered it up and conspired to paint those people telling the truth as “conspiracy theorists.” See this article from the Daily Mail in the UK. 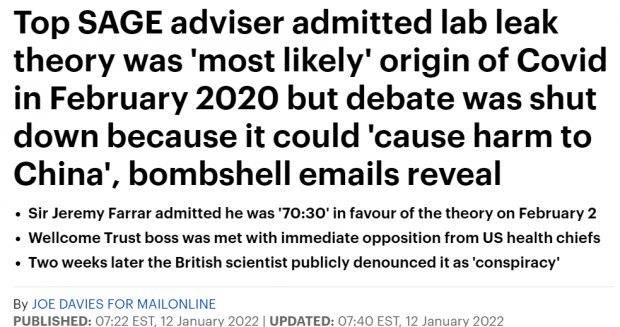 Original Project Veritas story including links to all the documents

Here’s the Steve Bannon interview of James O’Keefe on WarRoom.

We basically funded the creation of COVID. And Congress has insanely kept Fauci in control. I guess none of them have read RFK Jr’s book?

How can we make it more obvious to dump Fauci now?

Melatonin Significantly Reduces Covid-19 Mortality Totalitarianism Continues Unabated: Both in Plain Sight and in the Shadows