I&I/TIPP Poll: Americans Agree —McConnell, Pelosi, Fauci And Breyer Should Ride Off Into The Sunset

In a time marked by widening political differences across the country and growing ideological acrimony, it’s probably no surprise to anyone that politicians and other government officials have come under increasing critical scrutiny.

In a new I&I/TIPP Poll, we asked Americans which of four prominent public officials now making headlines should retire or leave office. Turns out, it’s all of them.

All of those named, it should be noted, have come under intense public pressure from both political interest groups, activists and media pundits to either retire or resign.

None of the four emerge unscathed in the poll. But those on this list who serve in Congress fared far worse than the others, with a sizable number of Americans in all three political groupings — Democrat, Republican and Independent/other — saying they’d like new leadership for their party in Congress. 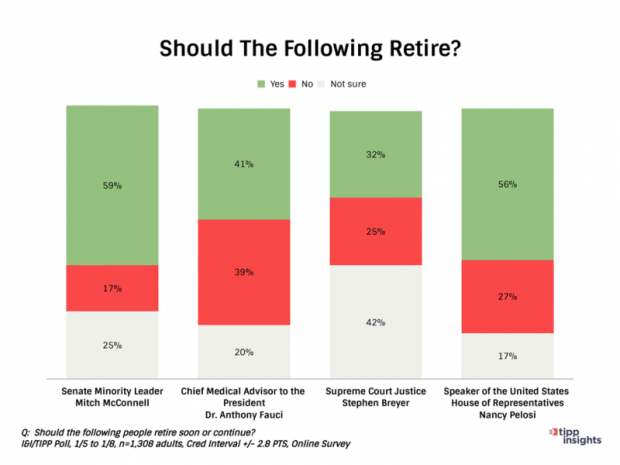 Mitch McConnell has become a lightning rod of sorts for criticism from all sides, so, not surprisingly, he gets the biggest response. Overall, 59% of those queried said he should quit as Senate minority leader, while 17% said no and fully 25% said “not sure.”

But his House counterpart, Nancy Pelosi, isn’t far behind. Overall, 56% of those who responded to the poll want her to leave, versus 27% who don’t and 17% not sure.

What’s perhaps surprising for both is the number in their own parties who want them to go. For McConnell, the number for Republicans is 53% vs. 23% who say no, while Democrats (66% yes, 23% no) and independents (57% vs. 15%) aren’t too very different. 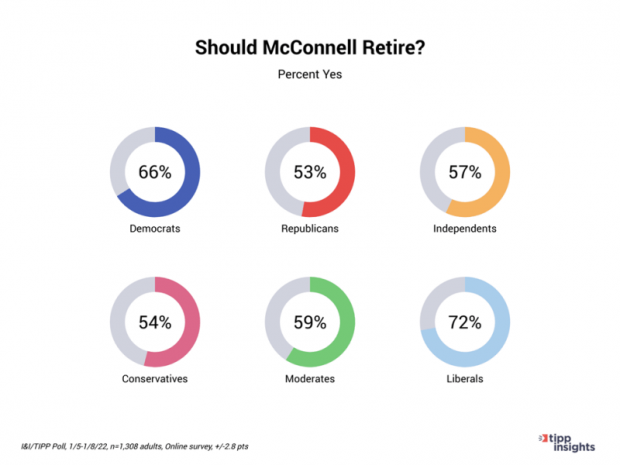 Pelosi’s numbers are better, in that a slender plurality of her own party want her to stay on: (41% say she should retire, vs. 43% who say she shouldn’t). Still, that 41% number is quite large, and indicates significant discontent within her own party with her leadership.