"Human Augmentation – The Dawn of a New Paradigm"

To begin this report highlights the important and benefits of human augmentation. From the report:

Human augmentation will become increasingly relevant, partly because it can directly enhance human capability and behavior and partly because it is the binding agent between people and machines. Future wars will be won, not by those with the most advanced technology, but by those who can most effectively integrate the unique capabilities of both people and machines. The importance of human-machine teaming is widely acknowledged but it has been viewed from a techno-centric perspective. Human augmentation is the missing part of this puzzle.

Of course, one of the first questions that must be asked when reading this report is what is human augmentation. An image from the report lists the technologies. The back of the report details these technologies in great detail: 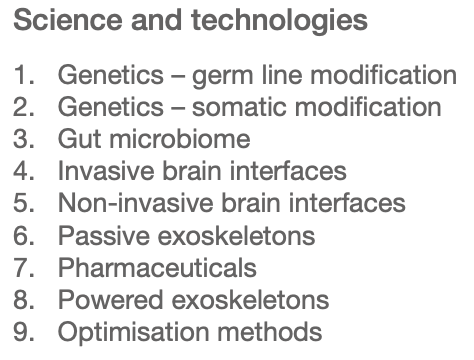 The document goes on to write that the role of ethics and public perception in the use of human augmentation are not the deciding factors in developing human augmentation. The general consensus of the report is that human augmentation is critical for natural security for the future development of warfare. It will be the military industrial complex (national interests) the ultimately decides what is developed.

We cannot wait for the ethics of human augmentation to be decided for us, we
must be part of the conversation now. The ethical implications are significant but not insurmountable; early and regular engagement will be essential to remain at the forefront of this field. Ethical perspectives on human augmentation will change and this could happen quickly. There may be a moral obligation to augment people, particularly in cases where it promotes well-being or protects us from novel threats. It could be argued that treatments involving novel vaccination processes and gene and cell therapies are examples of human augmentation already in the pipeline.

The need to use human augmentation may ultimately be dictated by national interest.

Countries may need to develop and use human augmentation or risk surrendering influence, prosperity and security to those who will. National regulations dictating the pace and scope of scientific research reflect societal views, particularly in democracies that are more sensitive to public opinion. The future of human augmentation should not, however, be decided by ethicists or public opinion, although both will be important voices; rather, governments will need to develop a clear policy position that maximises the use of human augmentation in support of prosperity, safety and security, without undermining our values.