Quietly Say "No" to Joe Biden's Call for Civil War

I’ve burned a lot of bridges in my life I didn’t intend to. To describe me as volatile and opinionated is a kindness.

On the best of days I’m barely fit for human consumption.

Looking back my life can best be described as a series of bad first impressions interrupted by moments of social competence.

This happens not because I don’t care about what people think or feel, but because I care too much. I see too much. And in my zeal, I put off people when all I want is for everyone else to see what I see.

It’s been a hard-fought lesson to learn that confrontation is not only a poor persuasion technique, it’s aggressively counter-productive.

I’m definitely still working on this.

At the same time, however, those that know me well know that when I’m confrontational, I’m engaged. I’m negotiating for a different outcome, albeit doing it badly. All my Italian flamboyance and bombast isn’t anger, it’s frustration.

In print it may be funny or inspiring but in person it’s simply scary and rude. I’ve mellowed with age, certainly. Thirty years of marriage to the greatest woman in the world will teach you a few things…

But there is always a limit in every negotiation. There is a moment when all the frustration melts away and becomes anger. Cold, hard, implacable anger. The energy to negotiate dissipates because there is no possible solution.

In this respect I’m just like my dad. We knew the bombast came from shock and processing the situation.

However, when he was most disappointed with me, when I felt the most regret for what I’d done, was when he was speechless.

In the months leading up to the 2020 election I was negotiating in my writing. Months of articles and podcasts detailing my anxiety, pleading with The Davos Crowd to not do what they ultimately did.

Don’t go there, I kept saying, you do not understand what comes next if you do.

On election night they went there. I wrote about it.

For weeks I’ve been saying I hope Trump’s performance is strong enough and his coattails long enough to preclude the Democrats and The Davos Crowd from trying to pull off the theft of the election.

That they would see the magnitude of the problem in front of them and be stopped short by little things like math.

And then realize that even if they did try and cheat it would be so transparent that nothing good for them would be gained by it. But they didn’t listen.

They didn’t listen. Pulling the theft off only emboldened them to push harder. Their plans to destroy the world and “Build Back Better” wouldn’t be stopped. They were on a roll. They’d pulled off the biggest psy-op in history with COVID-9/11 and now they’d just stolen the most important election in the world.

Even if they had private misgivings, in poker terms they were “pot committed.“

It’s clear now they truly felt they could bully the pot with their immense stack of chips.

My horror on election night was brief. Alone, staring at my screen in disbelief, I very quickly went from shock to anger.

And I got very quiet.

At around 2am Tuesday evening I realized that they were actually going to do this and I texted a friend the next morning. His response?

He got very quiet as well. Since then a lot of conservatives and libertarians have gotten loud because they still think there’s room to negotiate.

I told us then to become #Ungovernable and not wait for the vaccines. I burned bridges publicly confronting those who didn’t see what I saw. Had we done the right thing then we wouldn’t be here today.

Then on January 6th, Donald Trump made the strategic error to have them express their frustration at the Capitol. Davos used it to their advantage. Many are still being held as ‘domestic terrorists.’

After another eight months of rolling out their bio-medical terror state around the West and systemically silencing all rational (and some irrational) opposition to it, they pushed another big stack of chips into the pot.

Yesterday President Biden told the world he’d run out of patience with those unwilling to take an experimental gene therapy.

“What more is there to wait for? What more to do you need to see? We’ve been patient, but our patience is wearing thin and your refusal has cost all of us.” pic.twitter.com/XcALP2MrQB

Biden’s speech and mandates are an open call to the very thing I said right after the election, Civil War. He’s trying radicalize the unvaxxed to become violent. To push back at the bully pushing them.

These are the words of a bully and a tyrant, no doubt. They are also the words of a senile old man overseeing a decrepit den of soulless emotionally-stunted vampires terrified of losing potency.

They are, ultimately, the ravings of a group of oligarchs so saturated with their own power and decadence that their actions now look more like the tantrums of spoiled, narcissistic children rather than sober and competent managers of a society.

Since they are acting like children, we should treat them as such.

They believe there are “Rules for thee, but not for me.” Anarcho-Tyranny.

Biden played the Exasperated Parent card with this ‘patience is thin’ rhetoric. He’s appealing to those still terrified by a shadow-play on their tablets and screens to scapegoat the unvaxxed and have half the country turn on the other half. 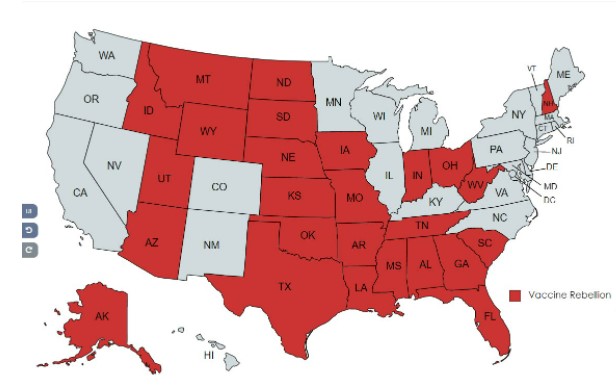 But it played to the growing contingent of Quiet Men like a geriatric Emperor of Ice Cream barking orders at a funeral for a society that has grown “cold and dumb” through abuse and neglect.

Biden is a senile old man, corrupt and clueless. He’s unfit for purpose and unfit to rule.

I can list his attributes all day long. It won’t change anything. So what will?

Bullies are always daring you to throw the first punch. They need to justify their next act of violence against you. Meeting their violence with violence is acting out of frustration. They want us barking. They want us reacting to their false reality. Don’t.

They’ve fed off our outrage. Now starve them with our silence.

Alaska Gov. Mike Dunleavy on Biden’s vaccine mandates: “This is ridiculous and unenforceable. If there was ever a case for the 25th Amendment…”

There is nothing they can threaten us with. These edicts are hilarious, desperate and unenforceable.

All their power, all their strength is irrelevant in the face of angry men who simply say, “No.”

That big pile of chips in the center of the table? An opportunity, not a barrier.

There are a thousand ways to beat a bully by not giving him what he wants, control.

This isn’t about the vaccine. It never was. The only public health crisis now is a public mental health crisis.

The people who’ve been broken by the COVID-9/11 terror campaign have their own issues to work out. They can be forgiven their terror but it’s time for the grown-ups to talk. The children can be excused from the table.

So, the opposite of their hysteria is needed. They don’t need a punch in the mouth, they need therapy. No more negotiating with facts. They are immune to facts.

What they are not immune to is a quiet, dismissive, if not exasperated, “No.” The kind of quiet disappointment my father used to shame me into maturation.

Nothing will drive them more insane with rage.

Calm, assertive statements of purpose. No histrionics. No court challenges. No media conferences.

No marches on the Capitol like they are trying to create the illusion of by seeding the idea into the media.

This is what they want you to do. Then they can justify to the self-righteously vaxxed that you deserve internment camps. That you are the terrorists.

Because they’re only recourse then is more violence. And every act of violence delegitimizes them further.

Biden declared war on 80+ million Americans and threatened Governors of sovereign states with intervention or removal.

If the Federales comes to Tallahassee, Gov. DeSantis should quietly meet them with force and arrest them. The Supremacy clause in the Constitution is irrelevant when the government is in violation of it.

Biden tried to light a fire beneath the people who have screamed for three generations, “My body, my choice,” “Health care is a basic human right,” and “Keep your laws off my body,” hoping they will be his Brown Shirts and torch our society rather than face the ugly truth of their hypocrisy.

What he did was make a whole lot of people get very, very quiet.

The rage of those self-righteous hypocrites will not be slaked until they burn the COVID-9/11 heretics at the stake because they cannot accept responsibility for their emotions.

They have to pour their vitriol and envy onto us because they can’t face their evil.

It would be far cheaper and a price I would gladly pay at this point to keep my society civil.

These same people think Oregon should erect trade barriers with Texas over its abortion law while believing Biden can force people to share their medical history with any random person who asks for it.

These people aren’t worthy of your time.

They are abusers and blasphemers. Braggards and bullshit artistes.

And they have purposefully broken our society because they can’t face the man in the mirror, covering him up with an embroidered mask to salvage what’s left of their individuality.

Our task now is shining a light on this, not in anger, but in pity. For decades they mistook our silence for assent.

It is past time we disabuse them of that notion.

Just like we should pity our senile Emperor of Ice Cream for thinking he’s the president and that anything he says carries the force of, well, anything.

Previous article by Thomas Luongo: Breaking the Empire Means Breaking With the Saudis

Is Covid-19 a Bioweapon?Review: “Unanswered Questions: What the September Eleventh Families Asked and the 9/11 Commission Ignored,” by Ray McGinnis